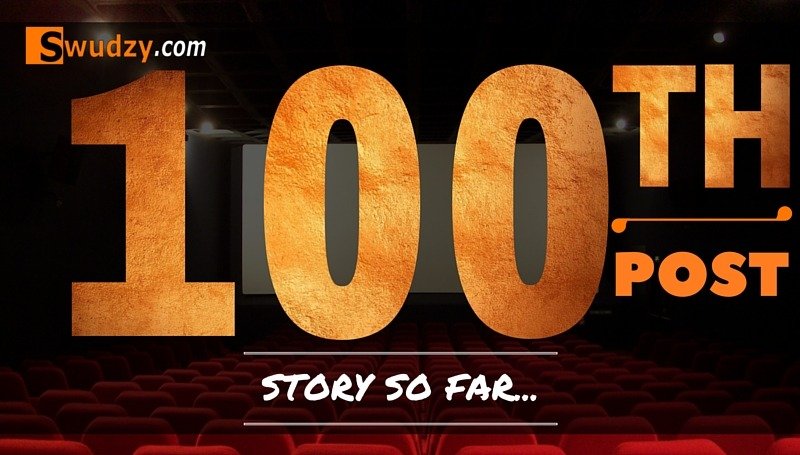 Swudzy.Com is in its 4th month since its inauguration on 29th February 2016. And if nothing else, this has been an exciting journey, to say the least. With a family of Swudzy lovers expanding over various platforms like the Swudzy Website, Facebook, Twitter, Instagram, YouTube, etc., we are growing every moment. And being a fairly new website, just 3 and a half months old to be precise, it is a great achievement, to reach the 100th post.

These 100 posts are covered under various categories. Those include 39 Movie Reviews, 15 Music Reviews, 19 Trailer Reviews and 10 Short Film Recommendations to name few. We are able to write these posts because you read them. A big thank to all of you readers out there. Keep reading.

Apart from the 100th post landmark that we are on, there are also some other achievements that we could achieve with your support.

On the YouTube channel of Swudzy, we started out with a weekly episodic series of a fictional character ‘Filmy Farooq‘. The series was a short setup for a yet to be announced bigger web-series.

But, the most substantial factor of growth of our YouTube channel was JUMP. ‘Jump‘ was our first attempt at making short movies, more of which we will be announcing soon.

During the past three weeks, that is the time since we uploaded JUMP, we had been able to cross 60+subscribers. Along with that, the short film had been watched around 1500 times, gathering around 10,000+ watched minutes for the channel in just the past 28 days. As a token of our love for our viewers, we will soon be uploading the bloopers and behind the scenes of JUMP.

Possibly the biggest community outside the website itself, Swudzy has created more than 300 likes in the past 3 months on Facebook. And the numbers are growing every day. Twitter has not grown with that momentum but it has been really rewarding as we got to interact with many legends of their field. To top it, we got a follow from the super awesome Shafqat Amanat Ali Sahab. It was a really great moment.

Twitter and Facebook not just the places where we update every post first. But also a great discussion follows all those posts. We have also started to grow on Instagram with more than 250 followers. We expect these numbers to grow in the coming months as well.

What to Expect Next

We are planning upon two light hearted funny web series, which are under heavy planning and development. Along with that, we will be introducing few more characters like Filmy Farooq in the coming months. Also, there will be a few more short movies in the next three months. One of those short movies will be officially announced soon. Possibly along with the blooper reel of JUMP. Keep watching this space for more.

Once again, I would like to thank each and every one of you readers for being a part of our beautiful journey so far. Keep traveling.