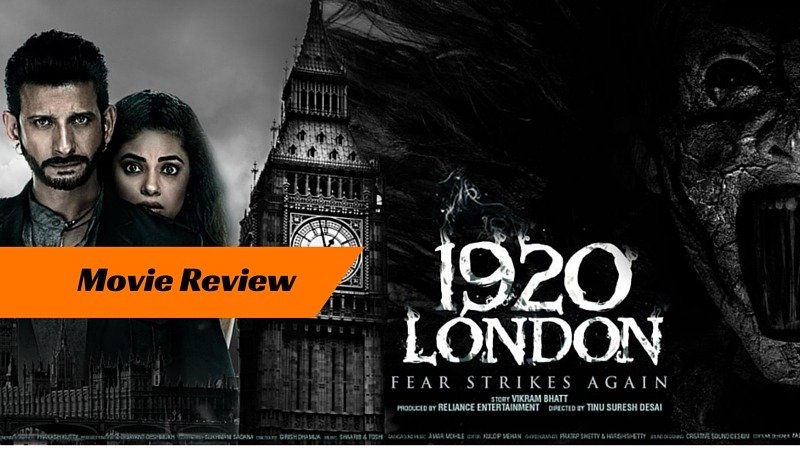 The trailer of the third installment of the 1920 franchise was everything but scary, and the music of the movie as well could not generate a buzz that we expect from every Indian horror movie’s music. Still, we gave the movie a benefit of the doubt and went with hopes from the movie. It did entertain, but not through the horror, but the reactions of the people sitting in the theatre. Read the complete 1920 London Movie Review right below.

1920 London is the third movie in the 1920 series and this movie is directed by Tinu Suresh Desai. The movie is written by Vikram Bhatt himself and features Sharman Joshi, Meera Chopra, Vishal Karwal and Sushmita Mukherjee. The movie is certified ‘A‘ by the Central Board of Film Certification, India for its horror genre.

The plot of the movie revolves around Shivangi(Meera Chopra) belongs to a royal family in Rajasthan, India and right now is living with his husband(Vishal Karwal) who is also a son of a royal family. They receive a gift from India, which is covered with a Black Magic spell and is possessed by a Dayyan. The Dayyan possesses the husband’s body and starts deteriorating it. The maid at the couple’s mansion, Kesar-Ma(Sushmita Mukherjee) mentions that it is a spell of Black Magic by Kuwar-Sa(the husband)’s step-mother, and Shivangi  decides to visit India to her home and mentions the case to her father. They visit a Tantrik(Gajendra Chauhan) who tries to capture the evil spirit and fails. He suggests them to go to Mewar wale Baba, who happens to be Jai(Sharman Joshi), who was once in love with Shivangi and she also loved him back. But after Jai engages in a tussle with Shivangi’s uncle, he is tried in court and Shivangi refuses to be his friend, resulting in him being imprisoned for 5 years(like, really). Now, Shivangi decides to ask Jai, who learned to heal in the prison from a guru(who was also in Prison for some reason), for help and after an initial disagreement, he agrees. What follows is a chain of combat between Jai, Shivangi, Kesar-Ma and the evil spirit. There is a major twist at the interval point, we would have told but it is the only exciting part, so No Spoilers. Stay Happy.

The first question that I had in mind while watching the complete movie, was that “Why did the makers opt to include a ‘London’ in the title?” They could have opted for any Indian city near a river as no other part is required for the narrative to be happening in London. Or possibly the makers got the stock footage of Thames, Big Ben, etc. for cheaper than Indian cities, in that case, its fine.

Apart from that, the story has little to think about, at least that was what the writers would have thought. There are not many characters in the movie, and yet, the writers failed to give depth to them except Jai’s character. The story has a lot of loopholes and is full of stupidity. It seems the writer were quite confused between giving prominence to the horror or the love triangle,so they made a mix, which is convincing as none of them.

The dialogues are funny at places where they shouldn’t be. The screenplay is quite decent and has nothing special to it.

Apart from Sharman Joshi, none of the actors seem to give hundred percent to their part. Meera Chopra is flat in emoting her part and has no impact on her role. She looks lost for the most part and is highly ineffective. Vishal Karwal cannot be blamed for his part as all he had to do was to make weird body movements, walk on four limbs with the head facing above, falling from bed, and sleeping with makeup and effects making him look old. Sushmita Mukherjee shows some brilliant possibilities which the makers could not explore and hence, the character of Kesar-Ma could not become anything more than a supportive character. Sharman, however, was good in performance as Jai.

The songs of this movie are inserted forcibly into the narrative without adding much to it. While the first song, All the songs could have easily been avoided, or reduced to a single verse. All the songs manage to do is to divert the minimal attention that the viewers had to the story, and then a loud clichéd scream or horror sound effect is required to pull it back in. Read the full music review here.

The visual effects in the movie vary greatly between shitty and decent. The use of green screen is evident in many places like the flashback conversation between Shivangi and Jai. The presentation of the spirits is somewhat impressive but not enough to be recalled after the movie is over.

The direction in 1920 London is nothing more than just okay. The director seems to lose control from the movie’s narrative at many points in the movie. He seems to be confused between making it more of a horror or a love triangle. It, however, ends up being funny. The use of typical Bollywood scares is too damn high. Much of the movie defies logic and common sense. Overall, it is a forgettable directorial venture.

While the movie is not good as a horror movie, we are quite sure, if you go with your friends, you will have a lot of fun, as long as some of your friends know how to comment on a loose point in the movie. For others, there is nothing scary in it, and you might want to wait for the home video release, or even better, ignore the movie.