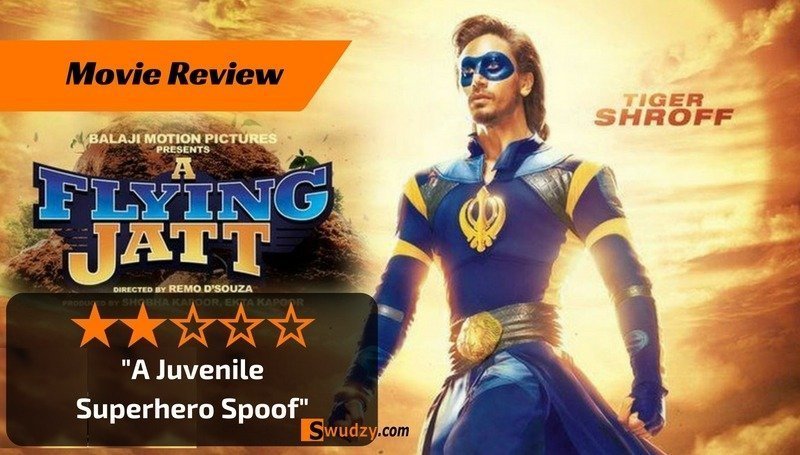 He is a man with super speed like the Flash and Quicksilver, healing power like Wolverine and Deadpool, ability to fly like Superman, has a spider-sense like gift which helps him hear the pleas of people, and he has intentions to save the planet earth from pollution, just like Captain Planet. Ladies and Gentlemen, this basically is A Flying Jatt in a nutshell. The movie is okay for a child to watch but for everyone else, it is close to an ill efforted spoof. Read the full A Flying Jatt Movie Review now.

About A Flying Jatt

A Flying Jatt is a superhero comedy movie. It is the fourth movie by Remo D’Souza as a director. The movie is produced by Balaji Motion Pictures. The movie features Tiger Shroff in the title role along with Jacqueline Fernandez, Amrita Singh, Kay Kay Menon, Gaurav Pandey and Nathan Jones.

Malhotra(Kay Kay Menon) is a rich industrialist who wants to make a bridge across a lake for easy transportations for his chemical factories. But the bridge cannot be built unless Kartar colony’s owner(Amrita Singh) sells the land to them. Also, there is a holy tree on the land which fulfills prayers. The owner has two sons, Aman(Tiger Shroff) and Rohit(Gaurav Pandey) who are just another common guys with normal lives. Malhotra hires Raka(Nathan Jones), a professional goon to saw the tree off. Aman sees him and starts a struggle with him and is beaten against the holy tree. A lightning bolt throws Raka away and next morning Aman wakes up with superpowers(as mentioned above).

Aman decides to use his powers for good. Some days later, Raka rises from the chemical waste that the bolt threw him in. He now feeds on pollution and Malhotra hires him to kill Aman who is now known by the name of Flying Jatt.

Watch the trailer of A Flying Jatt here.

The story is pretty much taken off from some episode of Captain Planet or so it seems. Both the story and the screenplay take up multiple inspirations from already popular superhero movies. For instance, the Flying Jatt adapts the super fast motions of quicksilver as exhibited in the X-Men franchise by moving through frozen coffee, changing the course of bullets and making goons punch themselves, while he saves the hostages. He also flies with his love interest in the superhero form which can clearly remind you of Superman and Louis Lane. This almost made me cringe.

The characters of the movie are goofy to the core. For instance, the ultra bubbly romantic interest of Aman who punches people to show love and expresses a little too much for every dialogue. The only logical characters were Aman’s brother Rohit; and Malhotra. A good thing about the story was that the makers kept a villain who is actually more powerful than the hero for the most part of the third act.

Speaking of the acts, the first act of the movie is utterly comical, without the comedy. The second act picks up interest in the plot but does not completely fulfill the task. The best part, however, is the first few minutes of the third act. The best moments in the movie come when Rohit wears his brother’s costume. And these moments include comedy and drama as well.

The dialogues are to be enjoyed only by the kids. Their parents will have to bear the movie for the kids. Overall, a below average writing effort.

Tiger Shroff once again flaunts his mesmerizing abs, magnetic moves and his love towards dance and acrobatics. However, during all this, he somehow forgets to measure his performance which is absent in some parts and overproportioned at others. Jacqueline is present in another useless role and tries too hard to make her presence felt. She looks extremely hot in the song Beat Pe Booty, though.

Amrita Singh does justice to her undercooked character of overactive Punjabi mom. Gaurav Pandey, who was last seen in Y-Films’ web series Man’s World. plays the role of Rohit with believability. Kay Kay Menon tries to bring life to the character of powerless villain and is too good at the performance. He now has another superbad superhero movie to his name(Remember Drona). Nathan Jones was brought just for the purpose of looking bigger and bulkier than Tiger Shroff, and that is the only thing that he does well.

Sachin-Jigar is one of our favorite composer duo and my personal favorite. They have given some awesome tracks in this movie. The movie starts with Sachin Sanghvi’s daughter Tanishkaa Sanghvi singing Chal Chaliye with a beautifully sketch-animated video which sums up the movie better than the movie. Followed by it, there are three songs, i.e., Bhangda Paa, Toota Jo Kahin Tara, and Beat pe Booty, which could have been avoided without much impact to the main plot of the movie. However, the songs are quite good, especially Toota Jo KahinTaara.

In the third act, the best song of the movie takes place. We are talking about Khair Mangda. It is the perfectly placed and perfectly composed song in the movie. Hats off to Sachin-Jigar, Atif Aslam, and Priya Saraiya. Also, another good track in the climactic fight is Raj Karega Khalsa. The title theme is also a great foot tapping number.Overall, a great effort at music, but not used strategically.

This is where the movie fails badly. The flying sequences are so unreal that Superman of Malegaon feels better executed in front of this. Especially when the performers take off to fly, their swing in the cable is clearly noticeable. The green screen is also not perfectly used. The climactic fight tries to remind of Man of Steel final fight between General Zod and Kal-El but ends up being a spoof. It is funny that the makers decided to have the fight in space without giving breathing troubles to either of the characters. To be noticed is that they can walk, run, jump and land upright in a gravity-less atmosphere. They crash into satellites and much more. R.I.P. physics.

This is perhaps the worst directorial effort by Remo D’Souza. He won hearts with F.A.L.T.U, was innovative with ABCD and ABCD2, but this looks a mess considering the last three movies were actually entertaining. He raises an issue but does not manage to execute it the way he would have wanted. The way he directs the actors is the worst aspect of his film. However, he does extract great work from the composer duo of Sachin Sanghvi and Jigar Saraiya. A decent direction.

A Flying Jatt is a well-intentioned but ill-executed movie. It has the heart but it is hidden in meters thick flesh of nonsense. The characters are uninteresting and the effects are jarry. The movie ‘might’ be liked by the kids under 12 years, but anyone above that age is probably going to feel cheated by the movie. The second act and the first few minutes of the third act are the best part in the movie. Watch it, but at your own risk, as we doubt the Flying Jatt might not come to save you. Or better, watch Happy Bhag Jayegi again.