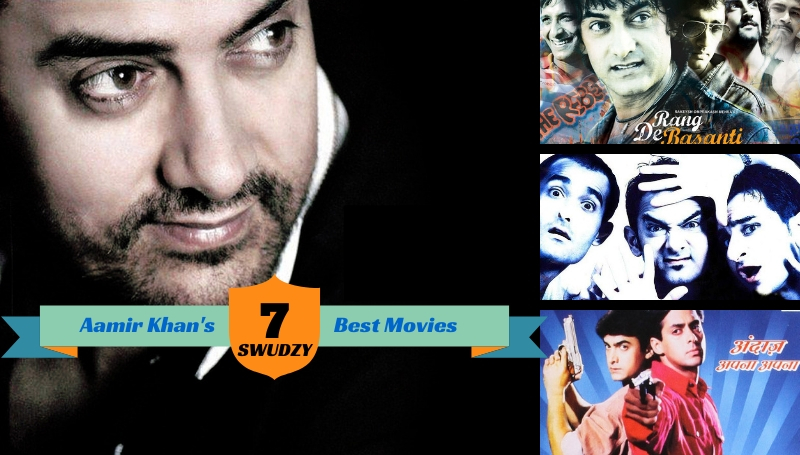 Aamir Khan, also known as Mr. Perfectionist is one of the leading Stars of the Indian Film Industry. Being an active part of the industry for more than 28 years, he has contributed to many movies, great and small. Be it a mature comedy classic ‘Delhi Belly‘ or the critic favorite ‘Dhobi Ghat‘, he has never hesitated from trying something different. Today (14th March), he completes 51 years of his life, and to honour that, we present before you, our picks for the Top 7 films that define Aamir Khan, the actor.

Note: This should be noted, that we are not looking at the biggest box office hits that came with Aamir being the part of the movie. Nor are we looking at the movies with the most rating on IMDB. Instead, we will be mentioning the flicks that established Aamir as a star or strengthened that spot in the heart of fans.

Also to be noted, that we are taking a single movie if there are more than one where Aamir has teamed up with some director.

After appearing in some major movies like ‘Yaadon ki Baarat‘ as a child artist, Aamir made his acting debut as a lead in 1988. ‘Qayamat se Qayamat Tak’ introduced him with the everlasting charm along with Juhi Chawla, who appeared opposite him in several other movies after that. This movie was directed by his cousin, Mansoor Khan.

Check out the Taaza Taaza Aamir with Juhi in this song.

This movie directed by Rajkumar Santoshi had two actresses, but it is remembered for the almost-perfect Bromance between Amar-Prem (Aamir – Salmaan). It is considered as one of the comedy classics of the Indian Cinema, even though it earned average sums at the box office. Aamir was considered as a ‘Serious‘ comedian after this movie.

The first thing that comes to mind after listening to the name of the movie is the buzz of the Academy Awards around it. Although  the movie could not bag the Oscar, it was undoubtedly a classic. Ashutosh Gowariker‘s detailed direction and Rahman‘s music were equally complemented by the ensemble cast led by Aamir. This movie made him a star bigger than ever.

Check this awesome track from Lagaan.

This movie was the directorial debut of Farhan Akhtar and also introduced a new style of direction in Indian Cinema. The subtle storytelling and realistic characters & performances made the movie a masterpiece. Aamir as Aakash was a highlight of the movie, as charming as a Disney prince.

Relating the 6 modern-day youth to the freedom fighters was a tough task, but the movie succeeded in it. Another ensemble star-cast, that included R Madhavan, Soha, Siddharth, Kunal & Sharman was a collective effort to excellence. But what emerged out was the playful and funny ‘DJ’ played by Aamir. Playing a college student at the age of 41 was a tough job. Khan made it believable.

Check out this awesome song from Rang De Basanti

This movie touched a lot of hearts, kids and parents, alike. This one was not a character-driven or star-driven movie, but a story-driven movie. This is evident by the fact that Aamir Khan himself was a supporting actor in the movie, where the lead was a newcomer kid (Darsheel). Also, to add to the impact, the movie was directed as well by Aamir Khan.

And this was how Aamir was introduced in this film.

While DJ from Rang De Basanti was in senior years, played by Aamir at 41. In 3 Idiots, Aamir(now 44) played a fresher to an engineering college. Beat that Rahul Baba(can be confused with Rahul, the politician; and Rahul, the Character played by another Khan; you can think whatever you like man. *grin*). Building on the theme of Taare Zameen Par, this movie had more entertainment and more connecting value to it. Also, the movie started a relation between Aamir and Raju Hirani, which made another movie, like PK. But since, we cannot include 2 movies from the same director, PK could not make it(Affsoss).

Listen to this awesome anthem from the movie.

While these movies were huge hits, there is another thing that is worth noticing, 4 out of these 7 movies were multistarrer, 1 of the remaining had a kid in the lead, 1 was his debut movie, and Lagaan, had a supporting cast capable of making a decent budget movie by themselves(talent wise). So, we can say, that he is not just a star, but also an actor, and these movies did a great job in building his talent.

He is not just an actor or a star, but also an inspiration. Due to the nature of the website, we are not including the social work that he did here. Also, the controversies have been avoided to make the list. Share a smile. That’s what we want.

We Wish Aamir Khan a very Happy Birthday, and we hope he continues to make such great movies for us.

Do you agree with our list? What movies do you think deserved to be on the list? Head down to the comments and let us know.

PrevPrevious PostTop 7 Qtiyapa by TVF That You Must Watch
Next PostBAAGHI Trailer Review: Thrilling Action with Not So Compelling PlotLineNext