AZHAR Music Review : A Playlist in Itself 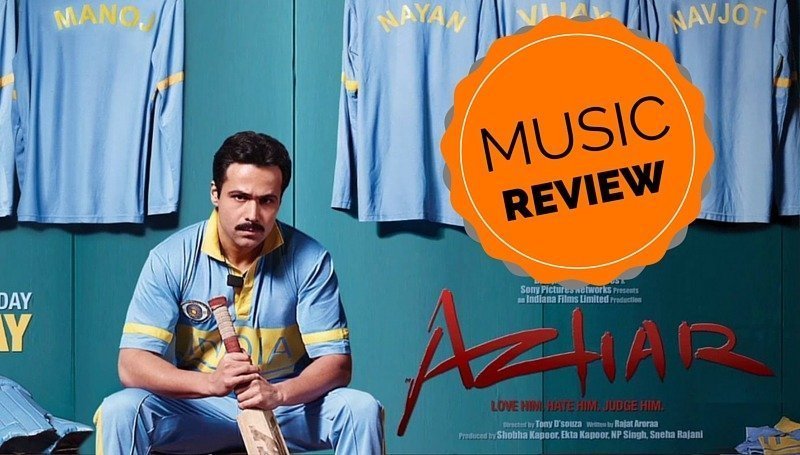 The biopic of the controversial cricketer Mohammad Azharuddin, the Emraan Hashmi, Prachi Desai and Nargis Fakhri starrer ‘Azhar‘ is releasing tomorrow, and here we are with the music of the movie. The track by track analysis of the music album of Azhar is discussed with the headphones on. So head down below and read the complete Azhar Music Review now.

Another Amaal-Armaan combination with continued awesomeness. This song is purely magical. The hook of the song contains a brilliant swing to it that wins the song instantly. The lyrics by Rashmi Virag are soothing and lovely. The seem to be the perfect match for the music. An awesome song. Surely we will keep it in our playlist.

The lyrics by Manoj Yadav in this song are literally awesome. The music by Pritam seems to work fine here, but at some places, seems misfit for the song. Arijit here has a flair to his voice that attracts the ears. The part with Antara Mitra seems odd but is melodious. Overall a mixed bag. We might keep it in our playlist.

Re-vamping the iconic track from the movie ‘Tridev‘ ‘Gazar ne Kiya hai ishara‘, DJ Chetas seems to hit the right beats. We can sense the song to be a definite high point in the movie. Perhaps somewhere near the second act of the movie. The music video of the song is already a pretty decent hit among the viewers, However, we feel it does not suit to the era of the story being told. Regardless, Aditi Singh Sharma‘s voice with Armaan Malik works wonders here. Great Job. It is already in our playlists. And yeah! It is a perfect song for saturday night parties.

Sonu Nigam and Prakriti Kakkar join in with Amaal Mallik for this song. Kumaar‘s lyrics appear to be inspired from the iconic ghazal ‘Patta Patta, Boota Boota‘ and are pretty decent. Cannot complain against that as the awesome music continuously overpowers the song. Sonu Nigam is brilliant but the best part of the song is Prakriti Kakkar. Her voice engulfs you into the song. Awesome vocals. Just added it to the playlist.

This is the song which might not suit the ears of many among the listeners. We are among them. We feel the lyrics were brilliant, inspiring and encouraging. The music, which is good during the dubstep in the hook, seems to be pale otherwise. KK’s vocals carry the charm but aren’t suited with the music. We will blame the music for the mediocrity of this song which will make it a mere background song which suits the movie but isn’t popular on the album.

Listen to all the songs right here.

The music of Azhar is brilliant and carries a lot of tracks that would have already secured a place in most of the playlists. However, the album ends with a mediocre note with Jeetne Ke Liye. Rest of the tracks are melodious to listen to. And Oye Oye has the right pump for being the plot-turner.