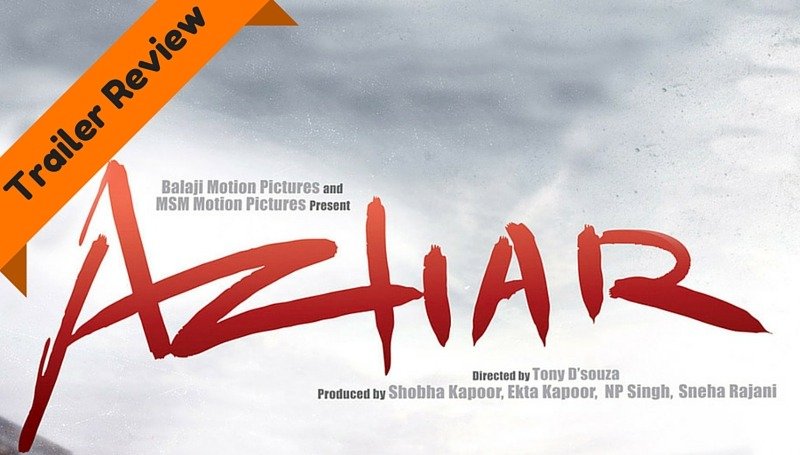 A few months ago, the biopic of highly successful and controversial Cricketer Mohammad Azharuddin was announced. Having Emraan Hashmi in the title role, the movie gathered huge amounts of whistles and claps from the teaser despite the widely criticized bad use of Green screen. A couple of days back, the theatrical trailer of the movie was released, and we bring to you all the highs and lows of the trailer. Check out the full ‘Azhar Trailer Review‘ now below.

Azhar is the biopic movie based on the life of the former captain of the Indian Cricket Team, Mohammad Azharuddin. The movie is directed by Tony D’souza and stars Emraan Hashmi along with Prachi Desai, Nargis Fakhri, Lara Dutta and Gautam Gulati. The movie is produced by Balaji Motion Pictures, Sony Pictures, and Indiana Films.

The story being a biopic revolves around the life of the cricketer. It covers the three distinguishing aspects of his life: His belief in God, His Love Affairs, and His Match Fixing Allegations.

First things first, Emraan as Azhar looks odd but good. His appearance does not remind of the man in context. Prachi Desai and Nargis Fakhri as the leading ladies look promising. Especially the look of Nargis was a big WOW in the trailer.

Other good stuff in the trailer are the dialogues and the music. The background score gives a chill with goosebumps. No songs are teased in the trailer, but we expect them to be good.

However, the trailer does not appeal visually, as in addition to the looks of the cast(apart from Nargis and Prachi and Emraan, we love Nargis) the odd use of green screen haunts again and can be identified. Especially the stadium scenes look completely fake.

Definitely, without a doubt, the best moment from the trailer was when a Pakistani player tells Azhar to join their side as Allah is with them, Azhar replies this:

That was really epic. We expect many more such epic dialogues in the trailer.