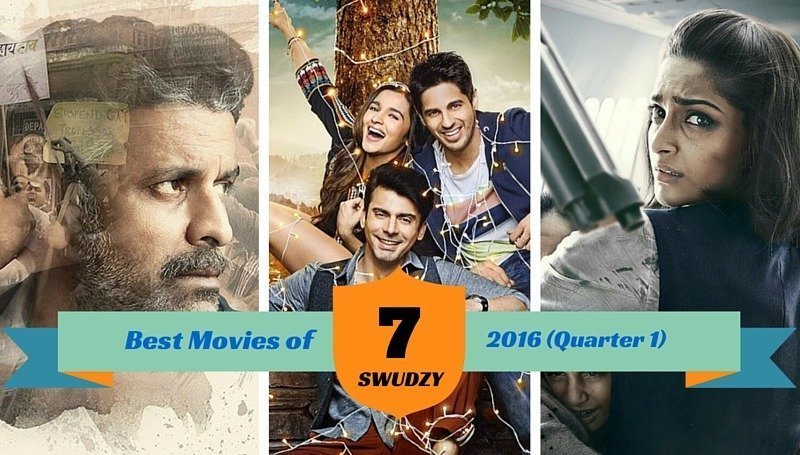 The month of March is almost over, and with it ends the first quarter(Jan-March) of the year 2016. During this period, the screens saw some brilliant performances, beautifully orchestrated music and to the point directorial gems. But for you, we have with us, the seven best movies of the quarter. As it is evident from the title, the movie should have been released during the period of 1st January 2016 to 31st March 2016 to qualify for the list. And to make it even more precise, we are taking only Indian movies into the consideration, so no DEADPOOL and no ZOOTOPIA to be found on the list.

Released on 4th of March, Zubaan is a movie about a young Sikh boy Dilsher/Harpreet who wants to become like his idol Gurcharan Sikand. Later he realizes that his true purpose is being a musician and hence leaves all else to pursue his purpose. The brilliant portrayal of their characters by Vicky Kaushal and Manish Choudhary is a treat to watch.

While the movie wasn’t a perfectly executed one, it still managed to make a soft spot in hearts of its viewers, thanks to the awesome music and brilliant acting performances

While Zubaan was a movie not suitable for everyone, the next entry on this list is a perfect entertainer. Releasing on the same date as Zubaan, this movie managed a comparatively larger audience following. It was a story about the Bankipur district in MP where the political influences on the Police department are at its peak. Abha Mathur joins the district police as SP and makes an effort to change the flow of events.

Brilliant acting performance by the director Prakash Jha was the highlight of the movie. Also, a special mention for the action scenes and the music playing in the background during that action. We couldn’t stop ourselves from clapping. (I had red palms at the end of movie).

This movie was the first release of the year 2016. With a cast including names like Amitabh Bachchan and Farhan Akhtar, the movie lived up to the expectations in terms of acting. Also, the brilliant writing gathered a lot of praise from the fans and critics. However, all the critics did not share this opinion and the movie gathered mixed reviews. We loved the movie and hence, it manages to grab the 5th spot on this list.

Released in the Republic-Day Week, this movie managed to strike the right chords in the hearts of the watchers. Brilliant build up proved to be the backbone of the movie which stood high in pride. Akshay Kumar outshone everyone else in the movie with his natural acting performance. However, we feel the movie could have avoided a few unnecessary elements to possibly reach the top spot on the list. For now, it is at the 4th position.

Hansal Mehta returned this year with the tale of Prof. SR Siras of the Aligarh University, who was found in objectionable condition with a friend in his room by few intruders. The marvelous performance by Manoj Bajpai is probably the best performance of the year so far. Also, what impressed in the movie was the way the story was told, showing Siras’s loneliness through his radio and a glass of whiskey. But, again, this movie was not for everyone, as a section of the few viewers who watched it, considered it boring. We, however, loved it.

The story of the air hostess in her 20s who saved lives of 359 passengers on a flight where she was the head person, Neerja is an emotional movie. Not about the rescue, but the person that Neerja was and her relation with her family. Sonam portrayed the best performance of her career with complete believability. Also, assisting her in the cause, was Shabana Azmi with an almost perfect portrayal of Rama Bhanot.

This actually is the best movie of the year so far. With the kind of storytelling that should be kept as a case study in film schools, this movie surprises the audience multiple times in multiple ways. The realistic characters, all of them showing shades of gray, was a perfect characterisation. The perfect cast made the movie even more special. Rishi Kapoor features in the best performance by him in recent times. But it was Fawad Khan who stood out from the rest with his perfect performance.

So, did you like our picks for the Best movies of the first quarter of 2016? What were your favorite movies in this period(please don’t say Mastizaade)? Head down to the comments section and let us know.