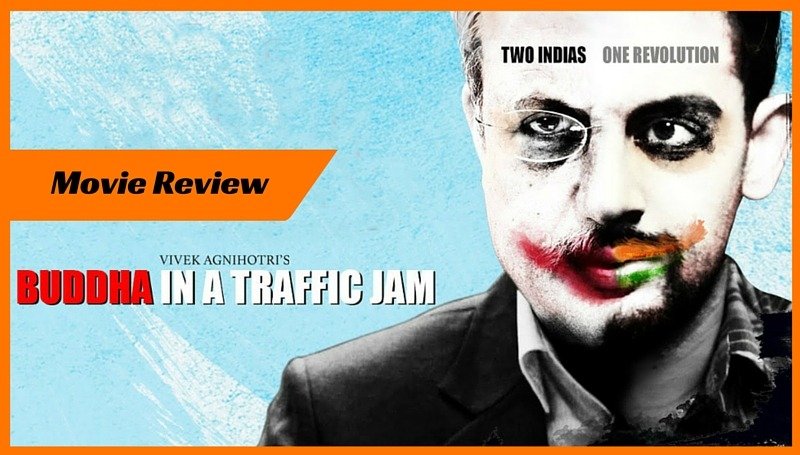 Buddha in a traffic jam looked more like an arthouse film on a socio-cultural topic since the trailer dropped. And it was just it. Giving a commentary on the Naxalite issues in tribal areas of Bastar, it manages to narrate a story around it. Read the complete Buddha In A Traffic Jam Movie Review right below now.

About Buddha In A Traffic Jam

Buddha In A Traffic Jam is a socio-cultural drama movie written and directed by Vivek Agnihotri and features Anupam Kher, Arunoday Singh, Pallavi Joshi, Mahie Gill and Gopal K. Singh in primary roles. The film had been screened at multiple film festivals and received accolades.

Vikram Pandit(Arunoday Singh) is an MBA student in India who has a peculiar rebellious perspective to things. He raises an objection on his Professor Batki(Anupam Kher)’s point of view on corruption and this is where the Batki proposes a game where Vikram has to write the Batki’s articles as blog posts on the web and see if the internet may help in a social revolution. Vikram accepts the challenge and starts his campaign, however, he is attacked by a man who accuses Vikram of being a Naxal. Vikram aborts his campaign and returns to the normal routine. Batki has a wife, Sheetal(Pallavi) who runs a pottery club, the revenues of which are donated to an NGO, represented by Charu(Mahie), in Bastar. Due to a recent attack by Naxalites, the government bans a specific grant which was to be a contribution in the donation. Batki comes up with an idea and asks his students including Vikram, to come up with a marketing plan to help raise funds for the NGO to help the tribes. Vikram eventually comes up with a plan which eliminates all the middlemen in the process, but professor Batki finds it unrealistic, impractical and cloaked political propaganda.

Watch the Trailer for the movie right now.

While the concept of the movie was interesting, the story and plot did not have enough mettle to it. The key plot twists, which the director supposed to be so, were not surprising at large. Except for the major revelation, other twists look pointless. Being a basic economics student myself, I did not feel any believability in Vikram’s plans.

The story is presented in a novel-type structure with a prologue, an epilogue, and nine chapters. some of which last for about 2 minutes or less. The screenplay feels stretched at general except few interesting sequences. The dialogues are interesting to listen to but do not add up any value to the movie.

Now this is the spot where the movie excels, Except the characters in the secondary plot, that involves the Naxalite squads and its comrades, the remaining cast displays a stellar piece of acting performance. It is really tough to choose between the practical and occasionally raged Anupam Kher, the logical and instinctive Arunoday Singh, the considerate and concerned Pallavi Joshi and the silent and mysterious Mahie Gill, and crown him/her as the best performer. Each performance is at its respective peak, however, the supporting actors do not impress as much.

Mostly composed by independent artists, some of the songs in this movie are good to listen to, but do not have recall value. Other tracks are completely forgettable and hardly contribute to the collective cause of the movie.

The movie starts out at a great point and rises and dips at many places on its way to the end, where it remains a below average attempt at making a great critic favorite. Even if the concept of eliminating the middlemen is actually potentially beneficial, the way it was presented was the biggest concern. Only stuff worth watching in this piece is the performances.

Buying tickets to watch this movie might be a questionable decision by you. We think you should instead go and watch Azhar, or even better, go grab a pair of 3D glasses and watch The Jungle Book or Captain America Civil War instead.