Cinema And Holi : A Colorful Relationship 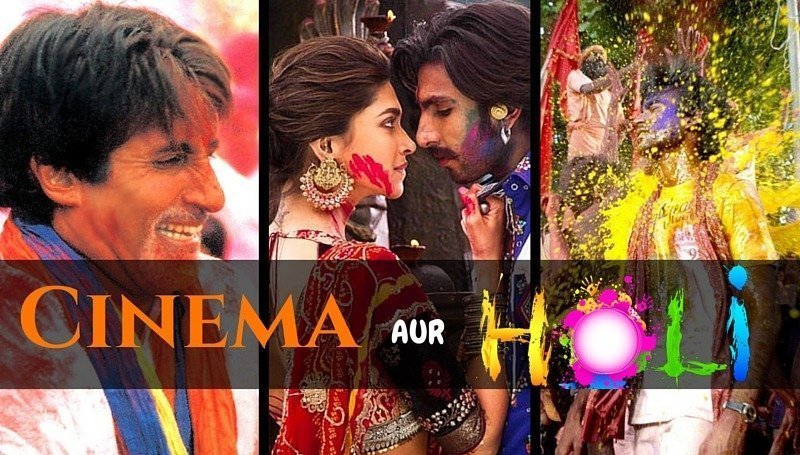 The depiction of Holi in movies has never been associated with any specific movie, year, star, or era. Since the advent of celluloid, there have been numerous incidents, and ways, in which Holi is celebrated on screen.

Here, at Swudzy.com, we take a look at some of the emotions that iconic Holi Songs have portrayed over the years, that are our favorites.

Here comes the biggie. There have been multitudes of songs which cover this category. For instance, ‘Ang Se Ang Lagana‘ from Darr, or ‘Do Me A Favour‘ from Waqt: A Race Against Time, have been hugely popular. But the song that we would like to include in this category is ‘Holi Khele Raghuveera‘ which encloses within itself a love beyond age. Amitabh and Hema romancing on this track is the cutest romance that we could think of this Holi. Have a look yourself.

While many may argue this song should have been in the previous category, we think ‘Lahu Munh Lag Gaya‘ to be the perfect mention for Passion in Holi. The start of this song has made a lot of young lovebirds go ‘Ahhhh….‘ and why not, the sizzling Deepika and the ever-active Ranveer set the screen to fire in this track. Have a look yourself.

General Notion of Holi has been as a happy festival, but not every heart feels alike. The song ‘Holi Aayi Re Kanhai‘ from the iconic movie, ‘Mother India‘ involves us with the grief of the protagonist that she feels while the rest of the village celebrates Holi. The flashback images of Nargis and Raj Kumar make you shed a tear for the character. Have a look yourself.

While the rest of the world is busy in celebrating, you are bound to stop yourself from joining in. That is tough to imagine. The song ‘Aaj Na Chhodeinge Bas Hamjoli‘ from ‘Kati Patang‘ shows similar emotions for Asha Parekh‘s character who has to stay away from all the celebrations as she is a widow in eyes of the world(which she wasn’t, she lied, for some reason, that is a spoiler, so we won’t tell, go watch the movie.). Have a look at this song now.

There have been a hell lot of songs for this category, and believe us, it was tough to choose a single song. And hence, we choose two songs. The first one being the iconic symbol of Holi, since the release of the movie in 1959. Today also, a Holi special episode of Doordarshan’s Rangoli is incomplete, till this song is played. Have a look at this marvel, ‘Are Ja Re Hat Natkhat‘ from Navrang.

The second one has given tough contender for the first one. Balam Pichkari has been on the lips of every youngster since its release. The groovy beats and quirky lyrics were enough for the song to be hit. And to add to that, there is the sizzling Deepika(second song on this list featuring Deepika) and the star of this era, Ranbir. Have a look at this Seedhi Saadhi Chhori becoming Sharabi.

While we understand that this entry is not exactly a dedicated Holi song, but the way the Holi is shown in this song had touched many one-sided lovers who claim to have been a ‘true lover‘. The way Kundan(Dhanush) portrays the complete surrender in love for Zoya(Sonam) in ‘Tum Tak‘ is by far the touchiest depiction of Holi. Have a look at this track from Raanjhanaa.

And here is the star of every Holi celebration. This song is a marvel in more ways than one. The beautiful poem by Harivansh Rai Bachchan, voiced by his son, Amitabh Bachchan was enough to make us dance. To add to that, there is the situation of the song. Amitabh and Jaya‘s characters join Rekha and Sanjeev‘s character to celebrate Holi. Amitabh and Rekha shared a romantic inclination in the past in the movie and with a few glasses of Bhaang, they get lost in that feeling, while Jaya and Sanjeev stand at the corners watching them. Never ever has a song been so iconically associated with Holi.

So this was what we could think of while having Holi around the corner. Which Holi songs are your favorite? Did we miss any mood of Holi? Or did we miss a song that could have been better depictor of the mood we mentioned? Head down to the comment box and let us know.