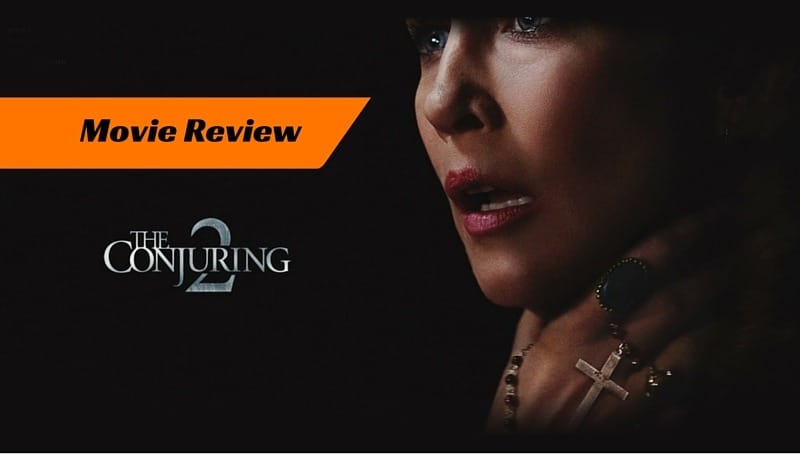 When the name of an extremely successful and brilliantly executed horror movie The Conjuring associated to it and the Director of the movie, James Wan returning for the sequel, The Conjuring 2 was expected to be, if not more, at least as scary as the first movie. And Mr. Wan does not disappoint us. Straight from the diaries of Ed and Lorraine Warren(with obvious dramatization and slight exaggeration), the movie is a good watch for genuine scares. Read the complete The Conjuring 2 Movie Review below.

Before we go on with the review, a quick update, last week, we released JUMP, the very first short movie by Swudzy on our YouTube Handle. The movie can be watched on this link, or right under in the embedded player.

Coming back to the review,

The Conjuring 2 is the second movie in the Conjuring franchise and once again takes a look into the lives of Ed and Lorraine Warren and their career as demonologists. The movie is directed by James Wan and produced by Warner Bros. and New Line Cinema. The movie features Vera Farminga, Patrick Wilson, Madison Wolfe, Frances O’Connor, Simon McBurney, Bob Adrian and Bonnie Aarons in main roles.

The story of this installment starts with a clip from the Amityville Horror’ Lutz family case where Lorraine sees an evil spirit who intrudes into her thoughts and shows her the death of her daughter and husband. The rolling narrations then tell us that the movie is about an equally horrifying case set in London, England where a single mother Peggy Hodgson and her children, Janet, Margaret, Johny and Billy are tortured by Bill Wilkins’ spirit who died in their home long before they got into the house. The most affected with this torture is the 11 year old Janet who is used as a medium by the spirit to communicate with the housemates. He possesses Janet. Meanwhile, Ed and Lorraine are requested by the priest to fly to London to look into the case and give the report to a Church as the case has become a media circus and the Church doesn’t want to get involved with anything that even remotely resembles a hoax.

On arriving, Ed and Lorraine can see the impact of the spirit’s deeds. And even if the spirit continues to haunt their family, Lorraine is not able to sense the spirit. Also, they are unable to record any proof to show to the church. However, the trouble is much bigger than what appears to the Warrens and it is personally involved with them as well.

Watch the Trailer of the movie here.

The story is stated to be based on the diaries of Ed Warren and Lorraine Warren, but many studies available on the world wide web prove it to be an exaggeration of the events. Regardless, watching it as a work of fiction, the story is quite intriguing and the use of demon and its ploys are appreciable in every sense. The screenplay is crisp and doesn’t drift away for even a single instance. Even when it seems to drift away, like the time Ed sings a song for Hodgsons, there is something important happening in the background to keep the viewers interested. The dialogues are just what was required in the movie and it makes the writing of the movie an overall positive.

The movie is an ensemble effort towards betterment of the movie and the casting of the movie is bang on right. With every character contributing towards the overall project, the highlight of all the performance for us will definitely once again Vera Farminga as Lorraine Warren and Madison Wolfe as Janet Hodgson. The Conjuring 2 has a brilliant supporting cast that gives its best for the movie.

There are scares in the movie and there are terrifying scares in the movie as well. The intensity of the scares keep increasing as the narrative flows forward. The whole cinema hall can be heard gasping in surprise on multiple instances. Screams can also be heard. And you may notice yourself to be on the edge of your seat or jumping in excitement on few instances.

James Wan has found a home in the horror genre and probably this was the reason why he refused to direct the eighth movie in Fast & Furious Franchise and instead choose to make The Conjuring 2 for a substantially lesser sum of money. The Conjuring 2 has right amounts of silences, scares and drama to make it an extremely engaging horror movie. The direction appears to be improving since the last movie as the narrative of the movie now features multiple aspects and is interwoven with care.

The Conjuring 2 is a good alternative to watch this weekend and weekends to come. With multiple genuine scares, the movie will make you come out of the hall with a satisfaction of money well spent. Definitely better than Bollywood horrors like 1920 London. And since Phobia is out of most of the screens, The Conjuring 2 is definitely a movie that should be watched.