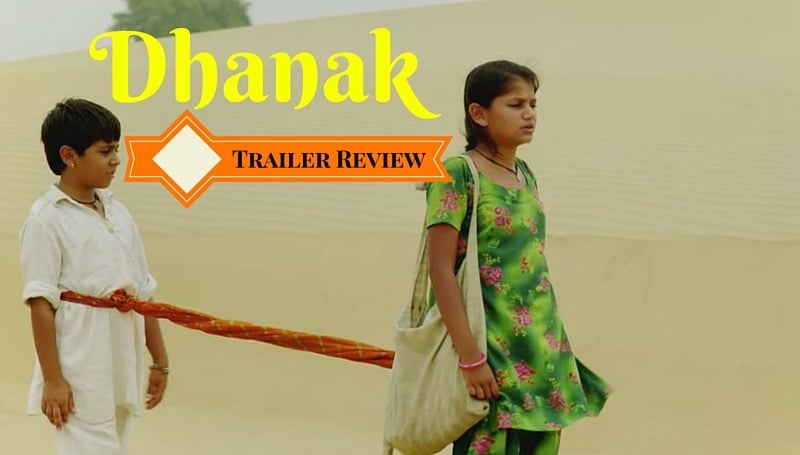 When the director of movies like ‘Dor‘ and ‘Iqbal‘ joins hands with the producers behind movies like ‘Ankhon Dekhi‘ and ‘Masaan‘, the product is bound to be awesome. Or is it? The answer can only be known on 10th June when ‘Dhanak‘ hits the screens. But as far as the trailer is concerned, this looks brilliant. Read the full Dhanak Trailer Review below.

Dhanak is a 2016 Drama movie by Nagesh Kukunoor that features Hetal Gada and Krrish Chhabria among an ensemble of a cast including Rajiv Lakshman(Roadies fame), Vipin Sharma, Ninad Kamat, Suresh Menon and others. The film is co-produced by Drishaym Films along with Nagesh himself. It will release in theatres on 10th June 2016.

The story is about  Pari, a girl in her teens, who has promised her blind younger brother Chhotu that he will get his eyesight before his 9th birthday. And after spotting her favorite star, Shah Rukh Khan on a poster of an Eye-Donation drive, she decides to ask him for help to make her brother see again. Pari and Chhotu set out on a journey across Rajasthan and meet various characters in the path. Can Chhotu see again? We would have to wait for the movie to arrive, for the answer.

The trailer of the movie is sweet and sensitive. It strikes the right emotions to make the viewers eager for the movie. Both Hetal and Krrish leave their mark on the minds with their honest performance(the tease of course). Also, the dialogues in the trailer are just so epic that you might jump on your seats clapping in excitement. Also, a separate mention for the music also is in order as the rendition of ‘Mast Kalandar‘ used in the trailer is brilliant.

The movie has received various awards at film festivals worldwide and we hope that it will touch the lives of Indian audience as well.

Without any doubt, the best moment from the trailer is towards the end where a policeman interacts with Chhotu after howering his hand before his eyes, and Chhotu was not reacting to that,

Also, as we have mentioned above, the rendition of Mast Kalandar is just epic. We would be eagerly waiting for the movie to release, and we guess same would be your reaction as well. Watch the trailer right here.

What were your favorite moments from the trailer? Did you like it? Do you agree with our review? Head down to the comments section and let us know.Also, do not forget to share the trailer with your friends.

PrevPrevious PostThis Guy Got Thrown Out of House for Watching Jungle Book. Read Why?
Next PostFAN Movie Review: This ‘Drama’ Should Not Be MissedNext