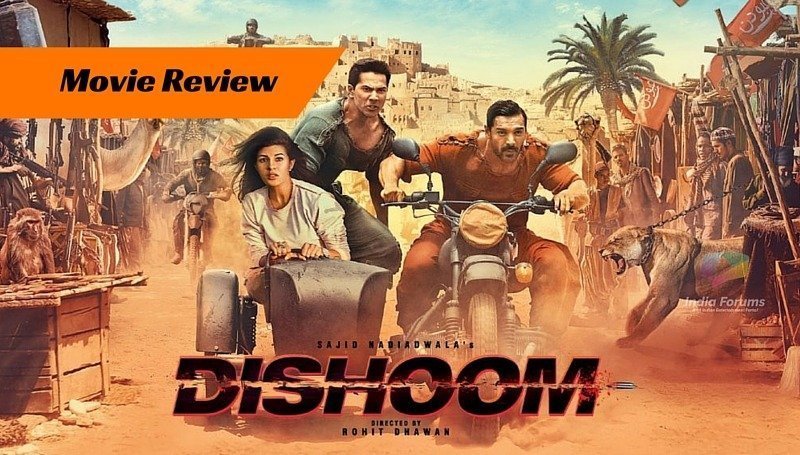 Varun Dhawan is a member of the elite club of actors who haven’t given a single flop. And his latest release has all the reasons to lure the audience. Catchy music, Muscles, Jacqueline and the humor of Rohit Dhawan. But it surely fails at being a sure shot entertainer. Read the complete Dishoom Movie Review below.

India is playing a multi-country cricket series in UAE and is set to face Pakistan in the final. But, their strike batsman, Viraj Sharma(Saqib Saleem) is kidnapped and a condition is laid out for the Indian government that the match should be played without Viraj or he will be killed. Indian government sends a special cop Kabir(John) to investigate the issue and solve the case. He has his own ways of working and takes a local cop Junaid(Varun) to assist him in the mission. They both find their first clue in the form of a petty thief Ishika(Jacqueline) who later joins the two in search of Viraj.

The story of the movie does not have much to offer as something new. And so was the screenplay. Most of the events in the screenplay were predictable. There were no thrills to be precise. The makers did throw in some unwanted cameos to excite the audience. For instance, Nargis Fakhri as the rich babe who has a lavish sports car which enticed Viraj; Akshay Kumar as the rich gay dude who rides John on his bike; and Vijay Raaz as the know it all of Indian and Arab happenings. While these three were enjoyable, the inclusion of Satish Kaushik’s voice with a prank call of Naved modified, seemed out of place, despite being funny. It was purely for the purpose of including a character for Parineeti so that Janeman Aah could be inserted. The primary characters did not have much depth. The only character emphasised was Varun Dhawan’s.

However, the dialogues of this movie are funny and innovative. At least the one by Varun Dhawan’s character ‘Junaid’. The most disappointing part of the movie was its climax, as the antagonist is caught with much ease.

The whole movie looked centred on Varun Dhawan for the most of the part. He is decent and charming for his part, but there is no extraordinary performance by him. Varun is more like the Anaari with the Khiladi John. John Abraham, on the other hand looked comfortable in his shoe but he did just what he has been doing in all the action movies he has been a part of. He is utterly unbelievable in emotional scenes. Jacqueline is lovely and acts the bubbly charm to the screen. However, her character has not much to amaze in terms of performance. Akshaye Khanna makes a comeback and it is a solid comeback. When he is on screen, you are bound to notice him. However, again, his character is ill written. The cameos by Nargis Fakhri, Akshay Kumar and Vijay Raaz are worth watching and the screen is lit up by them.

Rohit Dhawan has made this movie for entertainment and the movie serves it. Even if it is mild, you are entertained. He has used the cameos with fine craft. His control over the narrative was more or less positive, however somewhere the screenplay went loose. He has extracted acceptable performances out of the lead cast and hence, we can say that Rohit Dhawan passed this exam.

PrevPrevious PostSTAR TREK BEYOND Movie Review : Living Up To The Name(Almost)
Next PostBUDHIA SINGH : BORN TO RUN Movie Review : An Emotional MarathonNext