DOCTOR STRANGE Review : A Magical Introduction of The Sorcerer 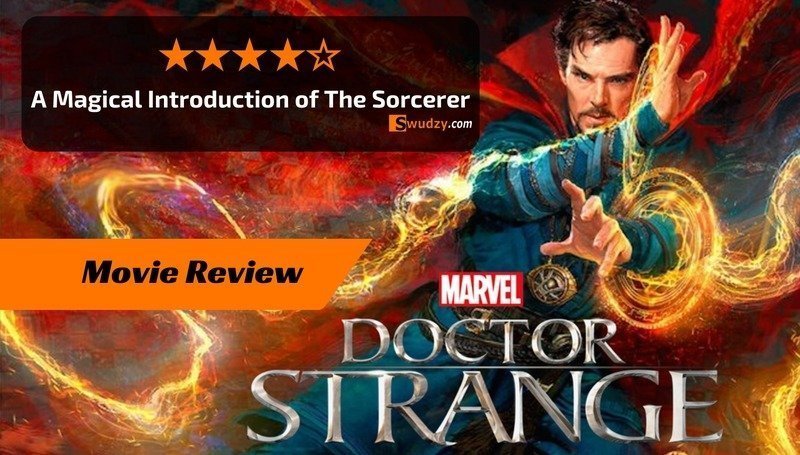 Well honestly, before I even mention the movie, I must admit that I am not a comic book reader. However, I do love to watch the comic book movies. But since this is the first time Stephen Strange was introduced on the silver screen, I had no idea about the character, apart from the obvious fact that he is a surgeon turned sorcerer. But I must say this, that the Marvel Studios have yet again proved their expertise at what they do. After Ant-Man and Guardians of The Galaxy, this is another brilliant setup and origin story that they have given. And perhaps, this is what makes me more interested in the upcoming Black Panther solo movie. However, this review is for the Doctor Strange movie released this Friday.

Doctor Strange is the fourteenth movie in the Marvel Cinematic Universe and stars Benedict Cumberbatch in the title role. The movie is directed by Scott Derrickson and produced by Marvel Studios. The movie is distributed by Walt Disney Studios Motion Pictures. Other cast members of the movie include Tilda Swinton, Chiwetel Ejiofor, Rachel McAdams, Benedict Wong, and Mads Mikkelsen.

Dr. Stephen Strange is an arrogant but famous neurosurgeon who is obsessed with his hands. In a severe car accident, he critically damages his hands and loses major functionality, hence rupturing his profession as a surgeon. Irritated by his inability, he puts in all he has to find a cure. This search of Dr. Strange takes him to Kamar-Taj, which is a secret monastery or reservatory or school-like place where the masters of sorcery talk about enlightenment and magic. Out of his curiosity and amazement upon learning about the astral plane and other dimensions, Stephen requests to stay and learn. The Ancient One, who is the sorcerer supreme, admits him after initial reluctance.

Stephen comes to know that a former disciple of the Ancient One, Kaecillius had revolted against her and joined the powerful Dormammu from the Dark Dimension, and are looking to destroy the planet. Kaecillius attacks the Kamar-Taj and starts destroying the various sanctums. It is now upon Doctor Strange, his ally Modor, and The Ancient One to stop Kaecillius.

As I mentioned before, I had no idea about the characterisation of Doctor Stephen Strange in the comics. And from what I saw in the trailers, I expected the character itself to be a somewhat boring doctor who happens to have found magic. But honestly, I was amazed at the character. The twisted arrogant, self-centered character of the doctor is the highlight of the writing in the movie.

The humorous dialogues are a staple in any Marvel Cinematic Universe movie and Doctor Strange is no exception. Right from the first few minutes, we get an idea that it is going to be an entertaining ride. The storyline, whether it follows the source material or not, is engaging enough to hold you on the seats. And the way the mystic world of sorcery, time manipulation, alternate dimensions and the multiverse is introduced is nowhere confusing. Kudos to the writers. However, I did feel that the storyline resembled a lot to the Kung Fu Panda series, where a disciple backfires and a new disciple helps the master in defending and tackling the rogue disciple.

Benedict Cumberbatch is mostly identified for his role as Sherlock Holmes in the BBC series titled Sherlock. He is widely loved for his role and here as well, he manages to make a place in the mix of superheroes. He aptly portrays the obsessions, the arrogance, the curiosity, the perplexity and perhaps every emotion.

Mads Mikkelsen as Kaecillius is the bad guy in the movie who portrays the rogue sorcerer who firmly believes in his action. Tilda Swinton is a gem in the movie. With her glowing big eyes to the calm posture, every aspect of her portrayal gently shows the supremacy. Rachel McAdams has a small role and is decent in terms of performance. Chiwetel Ejiofor as Karl Modor reminds me a lot of Sam Wilson from the Captain America series with the kind of his role.

My, oh my!! This movie is a gem. A precious gem that is out of this world or possibly from another dimension. For instance, if you liked the scene from Inception where the city folds itself. That scene is a kindergarten student just enrolled in the school of Doctor Strange. The action is normal for any superhero movie, but the effects are what make this movie a must watch. And yeah, the cloak of levitation is something that will stay in your mind long after the movie would have ended.

Scott Derrickson has fulfilled the responsibility of directing this movie with surgical precision. All the factors in the movie seem to fall into their respective places. He does draw inspirations from Ant-Man and Guardians of the Galaxy as to for the tone and storytelling. But Doctor Strange has its own place in the MCU thanks to the similar, yet definitive direction.

Whenever a Marvel movie arrives, there is an equal excitement about the actual movie and the post credit scenes. This movie has two of them. One mid credit scene and one post credit. While I would not like to spoil the scene, I would say that one of them gives a hint of Doctor Strange being connected to the bigger Marvel Universe, with another MCU character interacting with Stephen Strange. And the second scene lays out the ground for the second Doctor Strange movie.

As the movie ends while talking about a new infinity gem in the MCU, we are left amazed and excited at the same time. And this is no surprise. To sum up the review, it would be optimum to say that Doctor strange has effectively created a space in the already large and ever-growing ensemble of superpowered beings in the Marvel Cinematic Universe.

Also, Do not forget to watch Swudzy’s first Short Movie ‘JUMP‘ that released on 31st May on our YouTube channel. Watch the movie right here. We are also going to announce the next project in the coming weeks. Keep watching this space for more.