FAN Promotions: Why is it FAN-Tastic? 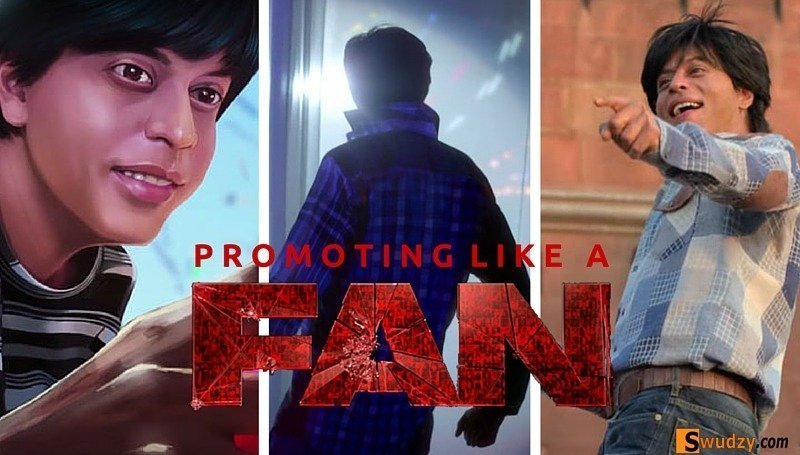 Shah Rukh Khan is a name associated with innovative and popular promotion strategies for his movies and ‘Red Chillies’ Productions. Be it the ticket sale offers for Chennai Express or going for a SLAM world tour for promoting Happy New Year, he has constantly looked for uncommon and innovative promotional measures. Apart from the usual countdowns and giveaways, the makers of FAN are keeping no foot behind in trying something different. With less than 45 days remaining for the release of his latest movie FAN and the trailer already gathering eyeballs since its release on Monday, we take a look at the promotional strategy that the YRF and Shah Rukh Khan have taken so far to reach the ‘Fans’ with complete effectiveness.

Yash Raj Films kickstarted the promotion of the movie in July 2015 with a one-minute teaser giving a glimpse of the Fandom of SRK when a rush of crowd gathers around Mannat to catch a single glimpse of their superstar. Also, we get a few frames of “The FAN” of the story, whose face is not revealed as of then. But to create a buzz, it was sufficient.

While the teaser was busy getting repeated hits, Yash Raj Films slid in the official Logo of the movie. Starting with the voices and faces of millions of Shah Rukh’s (or Aryan’s) fans in a mosaic which is formed within the fonts of the word FAN. The clip ended with a surprising ‘shatter’ effect on the A of Fan which clearly showed that this is going to be something more than just another story of a Fan.

A week after the logo release, on 1st November 2015 the fans of the movie got to see the look of the Fan, Gaurav for the first time. Shah Rukh really surprised everyone with his look, all credits to the team. The teaser featured a monologue by Gaurav explaining his feelings for his ‘God’ Aryan. The teaser also features clips of interviews given by SRK(here, Aryan) and also the clip of him receiving the first Filmfare Award in 1992. But the favorite part that I thought the trailer had was the guitar strum and the whistle towards the end of the teaser. Still in love with it. This teaser made the fans restless for the full trailer.

Before the fans could watch the trailer, YRF gifted them a special 5 part YouTube video series call “Tu Nahin Samjhega” on January 21, 2016. The series explored into lives of 4 of Shah Rukh’s biggest fans and also featured some widely known fans of personalities like Sachin, Charlie Chaplin, etc. in the pilot of the series. It was actually unexpected and we enjoyed every bit of it. Watch the complete series here.

The first official track from the music album was released as a Fan Anthem on February 16, 2016. It created a huge buzz and has already collected more than 6.7 million views on Yash Raj Films’ youtube channel. Over the next few weeks, multiple versions of the song were officially released on specialised music channel of YRF on YouTube, in languages like Punjabi, Marathi, Gujarati, Bhojpuri, Tamil, and Bengali. Our favorite is the Bhojpuri version by Manoj Tiwari. Listen to them yourself and tell us which is yours?

On 29th of February, with 45 days remaining to the movie release, the studio released FAN, the game in association with 99 games. We haven’t played this game as of yet, but we do expect it to be a widespread success. Since it is not a unique tool, it is also not one of our favorites from the lot.

The trailer was also released along with the game on the Leap Day. It had both Aryan and Gaurav in the frame with the narrative. Thrilling and exciting, this trailer has already collected more than 1.5 million pairs of eyeballs. Read our full view on the same here.

With 45 days still remaining for the release, it is easily possible for Shah Rukh and YRF to surprise their Fans, with some more of Fans. Also, not to forget, the official music album is yet to release. Don’t you worry, for we will be there with track wise views on it as soon as it releases. Till then, keep Dancing on Jabra Fan and Keep Loving Cinema.

Did we miss any of the promotional measures? Which of them were you most amazed by? Head down to the comments section and let us know.