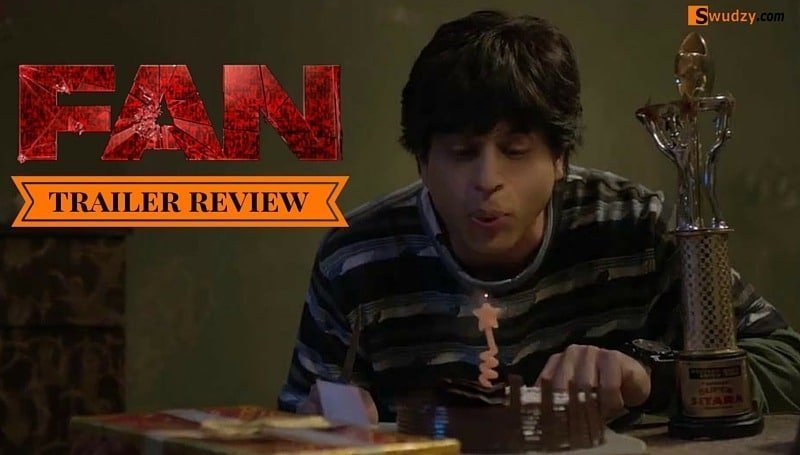 The trailer the title talks about is not another fan-trailer made by fans worldwide, but the official trailer for the movie “FAN” released a few hours ago on the official YouTube handle of Yash Raj Films. And to say the least, the trailer is satisfying. The actual fans of Shahrukh Khan were waiting for the trailer of this movie, since the announcement of the film. While the production house teased the movie with a brilliant teaser and a special 5 video series on Fandom, “Tu Nahin Samjhega“, under a careful and clever promotion scheme. This trailer is just what was needed to create the required buzz for the movie which is set to release on April 15.

From what appears to be in the trailer, FAN is a story about Movie Star Aryan Khanna’s self-proclaimed biggest fan, Gaurav, who turns from being ‘Mad for Him‘ to ‘Mad at Him‘ with the turn of events. He does all sort of unimaginable things to meet Aryan but when Aryan disapproves his methods, he will do all sort of unimaginable things, to Prove Aryan, the worth of a Fan like Gaurav and what he is capable of. Quoting from the trailer,

While the Teaser of the movie showed Gaurav’s devotion and madness towards Aryan, the trailer definitely succeeds in showing his uglier side, establishing him as the Anti-Hero of the movie, or so it appears. And it is so satisfying to see him wear the gray capes after so long. Fans were dying to see him back in roles like Darr, Baazigar, and Anjaam, that he did before becoming the star that he is today. And FAN serves them just what they ordered.

While there are multiple great moments within the trailer that we enjoyed, however, the two best moments that we thought the trailer had, were these

While we loved the trailer absolutely, we also missed the western/country-ish guitar theme with the whistle that featured in the first teaser and the FAN video series. However, we are sure that it will be thrilling to watch the same in the cinema hall.

Did you watch the trailer yourself? If yes then watch again, and if no, REALLY?? Watch it here.

What were your favorite moments from the trailer? Did you like it? Head down to the comment box and tell us right away.