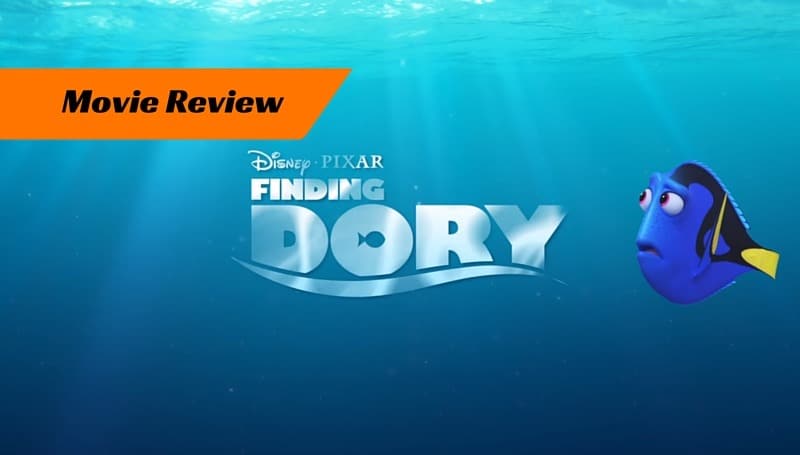 Finding Dory is the second big release of the week after Udta Punjab and as a contrast to the grimy feel of Udta Punjab, this movie is one with a lighter and happier feel. Even though it is animated, it can be enjoyed by kids and adults alike. Adding to it, if you loved Finding Nemo, you will love Finding Dory as well. Plus, we love Ellen DeGeneres, so that sums everything. Go watch it. Read the full Finding Dory Movie Review now.

Finding Dory is a much-awaited sequel to the much loved animated movie Finding Nemo (2003) by Pixar and Walt Disney Animation studios. It is produced by the same producers of the last movie and is directed by Andrew Stanton and Angus MacLane. Ellen DeGeneres reprises her role as Dory, the amnesiac blue fish along with Albert Brooks as Marlin, Hayden Rolence as Nemo, and Ed O’Neill as Hank in the primary cast.

Dory(Ellen) is living happily with Nemo and Marlin, when on a school trip, she suddenly remembers that she had a family and sets out to find them. Marlin and Nemo accompany her in the pursuit. However, during the same, Dory is trapped by few humans and sent to Marine Life institute, a conservatory for aquatic species. She later realises that it was the same place where she lived as a kid. Hank, an octopus who lost a tentacle helps her in her search for her parents for his own benefits. Marlin and Nemo also find a way to get into the conservatory. They are looking for Dory there, whereas Dory and Hank are busy finding Dory’s parents, with some help from Dory’s childhood friend Destiny, and the latter’s neighbour at the conservatory, Bailey.

Search and Reuniting with one’s family was one of the themes that the previous movie in the series, Finding Nemo had explored. But this movie retouches the same with a deeper impact. The fact that Dory didn’t even know that she had parents, and she left them years ago, are touching enough. And the fact that she is hopeful to see them are enough to make you smile. Along with that, Andrew Stanton and Victoria Strouse have developed some amazing characters like the short-sighted whale shark Destiny, the seven-tentacled octopus Hank, who just doesn’t want to go back to the sea, and more like them. The dialogues are catchy and capable of generating genuine humour.

Ellen wins all the hearts once again with her voice as Dory. When Dory is excited, we feel the excitement, when she is sad, we are sad. Albert Brooks and Ed O’Neill also impress as Marlin and Hank respectively. Overall, we can say that the voice cast complements their roles with complete sincerity and believability.

Andrew Stanton and Angus MacLane touch the right spots and strike all the right chords with Finding Dory. Keeping the feel of the first movie intact, the current movie only adds to the fun. The right actors for right voices, right animations, right edit at right places, the movie turns out to be a set of right decisions by the directors.

Finding Dory is cute and carries the soul from the previous movie. Having watched Udta Punjab right before entering the hall to watch Dory, it did not take much time for me to adapt to the feel of the movie thanks to the brilliant aura of the movie. It is a good movie to watch even if it is not a must watch. We guarantee a good time.

PrevPrevious PostUdta Punjab Movie Review: Worth The Hype. Must Watch
Next PostNOW YOU SEE ME 2 Movie Review: Charm and TricksNext