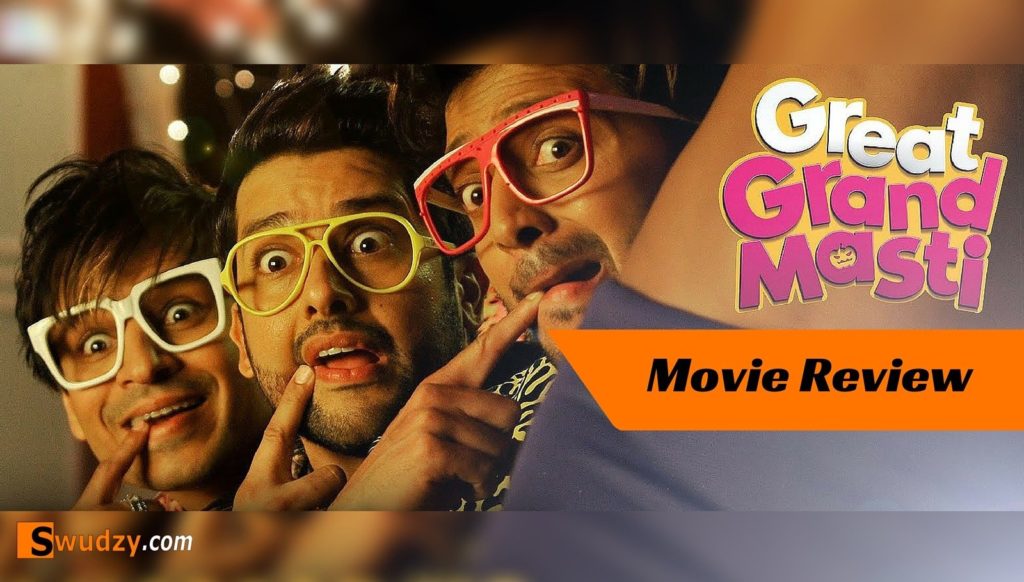 An awesome trailer promised a lot and made us expect great fun from Great Grand Masti. But alas! We had to face utter disappointment. Even though the movie started out on a favorable note, it started to fade away as it progressed. Read the complete Great Grand Masti Movie Review below.

Great Grand Masti is the third movie in the Masti franchise by director Indra Kumar. The movie is produced by Maruti International and Balaji Motion Pictures. It features the leading trio of Aftab Shivdasani, Riteish Deshmukh and Vivek Oberoi reprising their characters of Prem, Amar and Meet respectively. Along with them, this installment features Urvashi Rautela, Mishti, Shraddha Das, Pooja Bose, Usha Nandkarni and Sanjay Mishra.

Great Grand Masti revolves around lives of Amar(Riteish), Prem(Aftab), and Meet(Vivek) who are unsatisfied in their respective married lives. Amar has a mother in law(Usha) who constantly visits Antakshari Baba(Sanjay Mishra) to have his dead husband as her grandchild. And for that, Amar and his wife(Pooja) are waiting for the right Mahoorat to mate. Prem is fed up of his childish sister in law living with them who interrupts in the intimate moments between him and his wife(Shraddha). Meet has a brother in law who is a ‘Judwa’ kind of twin of his wife who creates trouble in their lovemaking.

All three of them decide to visit Amar’s hometown Dudhwadi, where he has a mansion which he wants Prem to sell. Along with that, they also have intentions of doing ‘Masti’ with babes in the village. Upon reaching they find out that the mansion is haunted by the ghost of Ragini (described as Sweet, Magar Sexy i.e., SMS) who was deprived of man-love during her life and is now looking for the same even after 50 years of her death. They get into the mansion and find a girl, Shabri(who actually is Ragini), and develop sexual intentions towards her. However, it backfires as when they find out Ragini’s true identity. she threatens that she wouldn’t let them leave the mansion unless any one of them decides to please her sexual desire and in that process sacrifices his life. Events take another  turn and suddenly, the family members of the boys also arrive in the mansion.

While going to watch the movie, we knew what we were getting ourselves into. We were expecting clichéd sexual humor and illogical turn of events. But along with that, we were expecting some fun from the movie. And to our satisfaction, the movie did start with some good laughable scenes. Special mention to the character of Antakshari Baba. The story of the movie was majorly predictable, but engaging. The screenplay is okay as it mattered very less in this movie. The dialogues, are as crass as we expected but funnier than what we anticipated. Especially the first half. The movie starts to dizz off from about 15 minutes before the interval, i.e., the introduction of Shabri/Ragini. The movie falls steeply with it as right before that introduction, there was an amazing part of writing with Sudesh Lehri’s minor cameo as an old man describing the character of Ragini.

After that, the movie was pretty much below average and only few laughable moments in the second half made it barely bearable. The characters of Amar, Prem and Meet were built in the first Masti movie and continue to entertain, But the character of Ragini was what disappointed us the most. Being the driving force of half of the movie, that character wasn’t written well enough to engage. Also, the use of ‘Resham Ka’ as an intimidating catchphrase by her character did not play off how the writers/makers would have expected it to. It would have worked better if Ragini would have said a Knock Knock joke, even.

As we mentioned, Amar, Prem and Meet are characters that were built in the first movie of the franchise. And it is evident, that the leading trio of Riteish Deshmukh, Aftab Shivdasani and Vivek Oberoi has gotten into the shoes of their characters comfortably. The chemistry between the three is commendable. The performances by Pooja, Shraddha and Mishti as their wives is forgettable. The sister in law and the brother in law is also not worth noticing. However, Usha Nandkarni as Amar’s mother in law is a screen stealer. And what can we say about Sanjay Mishra. He is a pure gem who shines brighter in this movie. Each and every scene where he is shown, becomes his scene completely.

The biggest setback was Urvashi Rautela‘s role. If anyone has read our trailer review of Great Grand Masti, they would’ve got to know that how big a fan of Urvashi Rautela I am. This was the first time I saw a movie with Urvashi in it(yet to watch Sanam Re and Singh Sahab The Great), and to be honest, I was disappointed, heartbroken and appalled. Yes, I agree the role was ill-written, but even with the amount of matter that she had, she performed poorly. The only job that she does well is dance off with the trio and show ample cleavage, midriff and legs. She looked hot, though. Really hot.

The best part of the movie according to us were the cameos by Shreyas Talpade, Sudesh Lehri and Sonali Raut.

The music is fairly average. There is no song that we would like to sing while we are not watching the movie. ‘Teri Kamar Ko‘ is catchy and the best of the lot. Rest all, I repeat, all songs are worth ignoring. And about ‘Resham Ka Rumaal‘ it is so sad to see a great song of all time being ruined like this.

Indra Kumar is a pioneer of the modern day adult comedy genre, and he proves his mastery at the genre with each of his recent work, which comprise mainly of the three movies of the Masti franchise. He beleives in wordplay more than the skin show and that is visible in the movie. Special mention to the scene with Sudesh Lehri. However, this movie by Indra Kumar fails to hold on its brilliance and drops off near the interval. The movie is entertaining before the interval, lack of a compelling conflict makes second half irritating at times. Also, we believe Ragini(Urvashi)‘s character could have been dealt with more care, but alas! It wasn’t.

Great Grand Masti is a movie that can be watched with friends, and is enjoyable till the interval. After that only few scenes are watchable. It is pretty easy to skip off this movie. Especially, the performance by Urvashi is a big turn off. Riteish, Aftab and Vivek are too good as their characters, however. Take your chances. Enjoyable, but only the first half. That is our verdict.