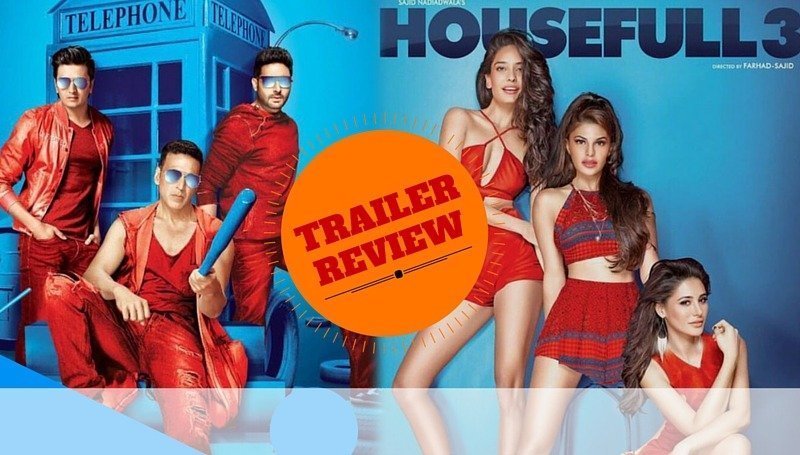 Okay as the title suggests, in this post we are going to talk about the Housefull 3 Trailer. And before moving any further, I would specifically make it clear that this review is not at all biased. I love Sajid Khan‘s passion for movies, but I am not giving a bad review because he is no more associated with this movie. Also, I liked Heyy Babyy, Housefull, and Housefull 2, but I did not like Himmatwala and Humshakals. Moreover, I liked Its Entertainment by Sajid-Farhad to some extent but it wasn’t the perfect comedy that we expected it to be. So that must more or less clear my stand on being unbiased to the movie. Let us jump straight to the Housefull 3 Trailer Review

Housefull 3 is the third movie in the Housefull franchise by Sajid Nadiadwala(Nadiadwala and Grandsons, Producer). It retains Akshay Kumar, Riteish Deshmukh, Jacqueline Fernandez, Chunky Pandey, and Boman Irani from the previous movie’s cast and adds on with likes of Abhishek Bachchan, Lisa Hayden, Nargis Fakhri and Jackie Shroff. The movie is directed by the director duo of Farhad-Sajid, who replace Sajid Khan from the chair.

The trailer starts with Batuk Patel(Boman Irani) talking about his cultured daughters and cuts to the contrast partying daughters. It was cool opening  for the seemingly humorous trailer, but not enough to amaze. The trailer then moves to the daughters revealing that they have boyfriends. Akshay Kumar‘s character suffers from split personality disorder and perhaps, the cut in the trailer could not capture the right moment, which turned out to the character to be unfunny in the trailer. Riteish Deshmukh‘s introduction also looked blatant but unfunny. Abhishek Bachchan‘s character looks the most underexposed and tries to find its place in the trailer which is not stiff enough. Then comes Jackie Shroff who is the most comfortable part of the trailer. He has a flair and clearly shows what his place in the movie is going to be.

Talking about the dialogues used in the trailer, they are mostly plain wannabe humour which has been a side-effect of Sajid-Farhad’s repetitive writing. We are not saying that they are not talented. They are possibly the best comedy writers currently working in mainstream Indian cinema, but this trailer was not their best work. Except a few dialogues, rest of the trailer looked uninteresting.

The acting teased in the movie shows that Akshay and Riteish are going to be as good as always. Abhishek shows the caliber that he last showcased in Bol-Bachchan. But his character does not say much. The actresses just fill the gap between other actors just like previous movies. But Nargis Fakhri(we love you Nargis) looked out of place.

Overall, this trailer is not the funniest that Housefull 3 could have made. We still hope that the movie is going to be hilarious due to the potentially humorous directors and performers.

Best Moment in the Trailer

PrevPrevious PostShort of The Week: ‘Arre Baba’ by Surya Balakrishnan
Next PostAZHAR Music Review : A Playlist in ItselfNext