7 Indian Superheroes Who We Want To See on Big Screen 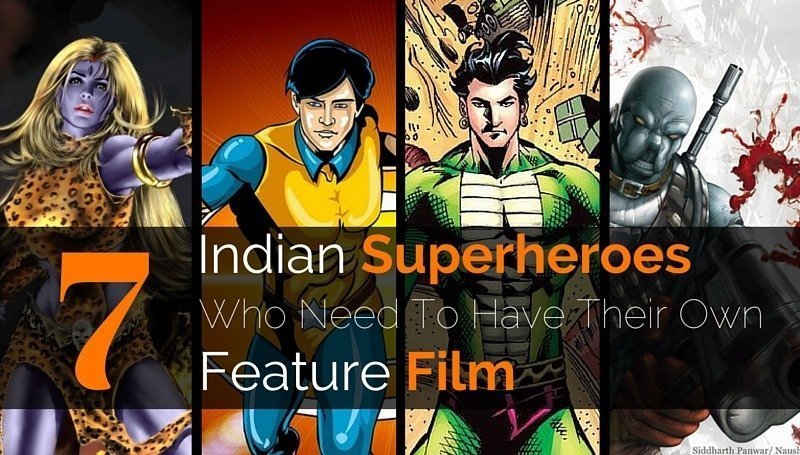 The much awaited Batman vs Superman: Dawn of Justice released last week. And despite the mixed critical and general public reviews that the movie got, the makers are managing to channel huge chunks of dead presidents in their bank accounts. Not just this movie, but a lot more movies including the high voltage Captain America: Civil War, Suicide Squad, and X-Men Apocalypse are waiting to hit the screens and gather huge sums themselves. With such a big market for comic book movies and Superhero movies, we take a look at our picks for the Top 7 Indian Superheroes that deserve to feature in their own movie.

Quite comfortably the most popular comic book superhero of India is none other than the master of serpents, Nagraj. Originally brought up to be used for evil by Prof. Nagmani, he turned to be the saviour of Mahanagar. Many argue that his character is hugely inspired from DC’s Superman and Marvel’s Spiderman. And to be honest, he looks like a mix of the two. Whatever the case may be, it would be awesome to see him swing on the snake-ropes through the streets of Mahanagar.

With the amount of flexibility the character requires, we can not think of any other name but Hrithik Roshan, however, it seems far fetched as Hrithik has been portraying another superhero on the silver screen, Krrish.

Dhruv does not have any superpower except his super quick mental abilities and training of acrobatics and interacting with animals/birds. He was born to two circus workers and learned the acrobats from them. He also turned to be fearless. Due to a rivalry between two circuses, the circus where they worked was set to fire which led to the death of Dhruv’s parents. He then set out to avenge their death. Later, the police chief of Rajnagar adopted him and trained to be a super fighter and became a Super Commando and leader of Commando Force. How we can’t wait to see the super dashing lad clad in Blue and Yellow.

Talking about the actor who according to us should play the superhero, we have only one name in mind, Vidyut Jamwal. Who can perform those amazing acrobatics better than him?

The punisher in Indian settings, Doga was found orphan by Daku Halkan Singh who misused him for personal benefits. He somehow escaped and landed up being with Adrak Chacha and his brothers who later trained him in weightlifting, boxing, martial arts, marksmanship, and combat. Upon experiencing a personal tragedy involving his ‘family’ he adopted the alter ego of Doga and started eliminating crime and criminals from streets of Mumbai. The character Doga believes in “uprooting the problem rather than solving it.”

Since a movie on Doga starring Kunal Kapoor as Suraj/Doga was announced by Anurag Kashyap under production of Phantom and Raj Comics, we do not take additional efforts to name our pick. Let them make a movie, and we may later criticize it.

While he has no superpower, nor does he has any combat abilities or ability to shoot like Abhinav Bindra(because he is old), he is probably the smartest of the characters introduced across publishing houses in Indian Comics scenario. Assisted by an alien named Sabu, Chacha Choudhary is said to have a brain that functions faster than a computer. Even though most of his comics have a comic element(see what we did there?), it would be interesting to see a compelling mystery being solved by beloved Chacha on the big screen.

One and only one choice, Raghubir Yadav, he has embodied the character on small screen and movies wait for him, as for his sidekick Sabu, we recommend Rana Daggubati(He’s Big).

This is the feminist side of the Indian Superhero clan and probably the only ‘standalone’ female superhero. Chanda was a housewife who discovers that her husband has been killing her daughters (sounds odd to us as well). It is then, that Goddess Kali used Chanda’s body to transform into Shakti. While Chanda is the ordinary Indian woman, Shakti is a ferocious killer who fights primarily against injustice towards females. Shakti can hear any female who needs help through telepathy.

In current times, we feel none other than Richa Chaddha could do justice to this role. As a secondary option, Priyanka Chopra may be considered(to gain star power), but Richa is our first pick.

Did you enjoy the merc with a mouth in Deadpool? Well not exactly Deadpool, but this pair is funny at times. Originally being a single person(wolf to be specific, highly evolved wolf), who was asleep for about 5000 years, Kobi was turned into two by Guru Bhatiki in the jungles of Assam. The human part was called Bheriya(Phobos energy) and the animal part was called Kobi(mobos energy). While Bheriya was strong, smart and wise. Kobi is strong, dumb, stupid, wild, mischievous, and aggressive.

We recommend Arjun Rampal for Bheriya and Manoj Bajpai’s voice for a CG created Kobi. Let’s see if it comes true.

This superhero is no stranger to cameras. Having been the central character of an age long TV series, Shaktimaan is one of the most popular superheroes known to any 90s born child. He was trained by a group of Yogis and Gurus to reach a level of intellectuality and Yogvidya that he achieved Superhuman abilities. He then took charge of eliminating darkness from Mumbai city.

While Mukesh Khanna embodied Shaktimaan for a huge chunk of our lives, he seems not young enough to perform action scenes required for the movie now. We hope to see Ranbir Kapoor take the role.

Which of them will you be hoping to get made? Did we miss any of your favorite superheroes? Do not forget to mention in the comments below. Also, do share this list with your friends who read the comics with you. And let them have a piece of fun that we think you had.

We will be back with another set of list, till then, Keep Loving Cinema.

Note : Swudzy.com owns no right of the images used in this post and are purely used for reference purposes. The original copyrights remain with publishing and production houses for respective superheroes.