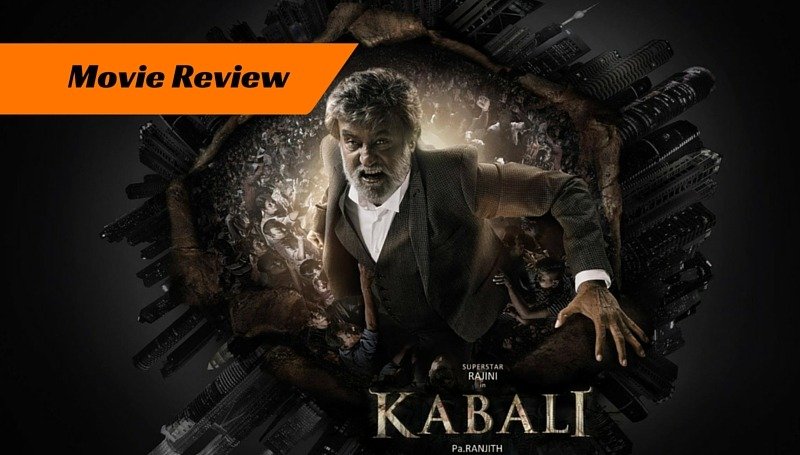 When one goes to watch a Rajnikant movie, he or she should be prepared to see some awesome stylised walking sequences full of style, charm and charisma. That is how Super Star Rajni rolls. However, this week’s release Kabali has just this to offer as everything more or less fails to satisfy. Read the complete Kabali Movie Review below.

Kabali is a Tamil Gangster Action movie written and directed by Pa. Ranjith. It features Rajnikanth, Winston Chao, Radhika Apte, Dhansika and John Vijay in primary characters. The movie is produced by Kalaipuli S. Thanu. However, the review below is for the Hindi dubbed version.

Kabaliswaran(Rajnikanth) is a gangster in Kuala Lumpur who had been jailed for the past 25 years for starting a massacre in a temple that killed many including his own pregnant wife. After he is released, he starts creating trouble for the rival gang, the ‘43 gang‘, which is involved in unethical crimes like drug trafficking and prostitution. The 43 gang plans to kill Kabali and appoints a female goon Yogi for the same.

Watch the trailer of Kabali here.

The story of Kabali is far from engaging. There is no moment in the movie where you feel involved in the story. The characters also are so shallow in their structures that at points in the movie, even Rajni sir’s style doesn’t impress. The screenplay looks to be made in a lot of hurry. There are lots and lots of repetition in dialogues and sequences.

Even though the movie started with some good cinematic metaphors(some of them cliched) like symbolising a bird’s flight with Kabali’s release from the prison. But it soon faded into the stereotypical south Indian action drama.

Rajnikanth leaves not much to disappointment with his performance. He is impeccable as the stylish gangster who always dresses up in suits for style statement. He pulls of the action scenes with utmost believability(a certain degree of masala of course). However, he does look a bit off color in some of the quiet scenes.

Radhika Apte is largely wasted in this movie. In one or two scenes only do we see her true performances. For instance (POTENTIAL SPOLER) when her character meets Kabali after 25 years gap.

All other actors, clearly seem to have no significance in screentime and worth performances. All of them are worth ignoring.

Just a one single song, Neeruppuda(Aag Hu Main) is enough while talking about music. It is played in possibly 40 to 50 percent of the movie, especially in all the action scenes and the stylised slo-mo walks. To be honest, it is just awesome. Even after leaving the theater, you will continue to sing it.

However, apart from that, no other song seems to impress.

Pa. Ranjith clearly wastes an opportunity of creating a masterpiece. When a name like Rajnikanth is associated, there is a huge responsibility of pulling of the movie as expected by the fans. Ranjit fails at it. Also, he does not seem to create an engaging piece. Maybe, a lot of repetitions in the narrative was one of the major factors behind it. Also, there was far less substance in the movie and mostly it was focussed on cashing in the super star image of Rajni.Clearly a below average attempt.

If you are wishing to go and watch this movie just for the sake of Rajnikanth’s style. You may enjoy it, however, you might also bring back some of the hoots, whistles and claps back as there are not much moments where you may use it. Satisfaction is not guaranteed. At least, we weren’t satisfied. Watchable only for the style. Or better, watch Madaari instead.

PrevPrevious PostMADAARI Movie Review : Irrfan Shines Amidst Average Movie
Next PostSTAR TREK BEYOND Movie Review : Living Up To The Name(Almost)Next