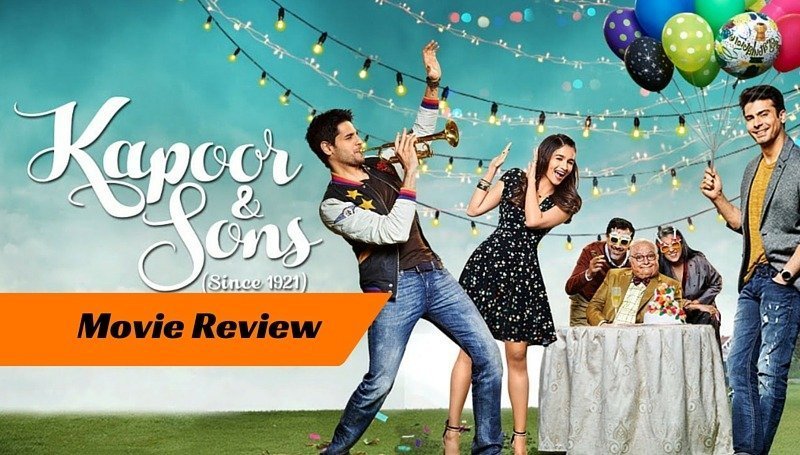 A great ensemble of cast, with already super hit music and a widely popular trailer. Kapoor & Sons had almost all the ingredients of a good movie. And that surely raised the bar of expectations from this movie. Did the movie live up to its hype? Read the Complete Kapoor & Sons Movie Review right now down under.

Kapoor & Sons(Since 1921) is a family drama movie produced by Dharma Productions and directed by Shakun Batra, who has also directed Ek Main Aur Ekk Tu for Dharma Productions before this flick. It stars the Pakistani heartthrob Fawad Khan along with Siddharth Malhotra, Rajat Kapoor, Ratna Pathak Shah and Alia Bhat along with our favorite Rishi Kapoor, a.k.a. Chintu Sir.

The story of the movie revolves around the Kapoor family, where Amarjeet Kapoor(Chintu Sir) is in his 90s but has a heart of a 19-year-old lad. His son(Rajat) and daughter-in-law(Ratna) are suffering from financial troubles, and also, all is not well in their marital relationship. Amarjeet suffers from a heart-attack and hence the third generation which features Rahul(Fawad) and Arjun(Siddharth) are called home from their respective work towns abroad. We later learn that all is not well between the brothers as well, and they undergo an ‘on-again-off-again‘ bond themselves. Then enters Tia(Alia) who becomes Arjun’s love interest, and also, has a ‘weird uncomfortable‘ moment with Rahul. While living under a single roof, Rahul, Arjun and the rest of the family pass through various turbulences, and family secrets are unraveled. What turns do they take? Watch the complete movie for it. Saying any further will act as a spoiler, and unlike the last review, we won’t disclose it.

As there was an almost perfect ensemble of a cast in the movie, there was a huge load of expectations from them. And to say the least, every single one of them has given their best, and possibly the best what the movie could demand. Alia is lovely and is set to increase her fan base. She surely is the present of the Indian movies and has a bright future ahead. Fawad and Sidhharth have played their part with complete dedication and sincerity. Each and every emotion is portrayed by both of them with ease. If there was not that crying scene by Siddharth(we won’t explain why he cried, watch the movie, you can’t expect the complete story), we could have said that the acting was perfect. Ratna Pathak Shah is as natural as mother nature. Rajat Kapoor once again impresses with his flawless acting. The cherry on the whole cake was none other than Rishi Kapoor. Playing a 90 something-year-old man with quirkiness, we can say, that this was the best work by him in recent years, and yes, we are including the performance in Agneepath.

The story synopsis, as written above, without any major spoilers, is complex enough for being the synopsis. And the actual story has complexities in its multiples. All of that complexity is, however, treated with complete control by Shakun Batra and Ayesha Dhillon. The real beauty of the movie is its troubled characters and their respective troubles which are beautifully woven into a story. The writing can not be praised enough, especially Amarjeet Kapoor’s dialogues. There is a meaning hidden in almost all his jokes. There are a lot of ‘Oh Shit!’ moments in the story, especially in the second half, when the secrets unfold. And all of them are just epic.

Flawless. The word is flawless. No other word can justify the brilliant editing in this piece. Focussing on multiple characters can sway the movie in different directions if not edited properly. But here, the editing is crisp enough to have our focus on each and every character in the movie. Especially the part where the conflicts reach their peak in the second half. Hats off to Shivkumar Panicker.

There is no lip sync song in the movie apart from ‘Kar Gayi Chull’, which seems like the song is played in the party and the actors are dancing with lipsync, inside the story. And it is good. This increases the believability of the story and connects to the audience more. As we mentioned in the music review, ‘Saathi Rey‘ outshines in terms of music in the movie. ‘Bolna‘ is also played at a crucial point in the movie. All over, the music is a plus for the movie.

This movie has the potential to turn into a filmmaking lesson to be played in all film schools across the globe. The storytelling is so compelling that you can jump from your seats, multiple times, and when we say that, we want to make it  clear that there is no over the top action scene or any massive suspense. It is the brilliant unfolding of the story that is the heart of the movie. The direction was brilliant as every piece fell in its place to make the movie memorable.

No need to rush for the movie tickets, this movie is here to stay. But it is highly recommended that you watch the movie at least once. The morning show of the movie itself had a decent occupancy and it is a good sign for the movie. We expect it to do good figures at the box office. But nevertheless, it is already a big hit in terms of Cinema experience.