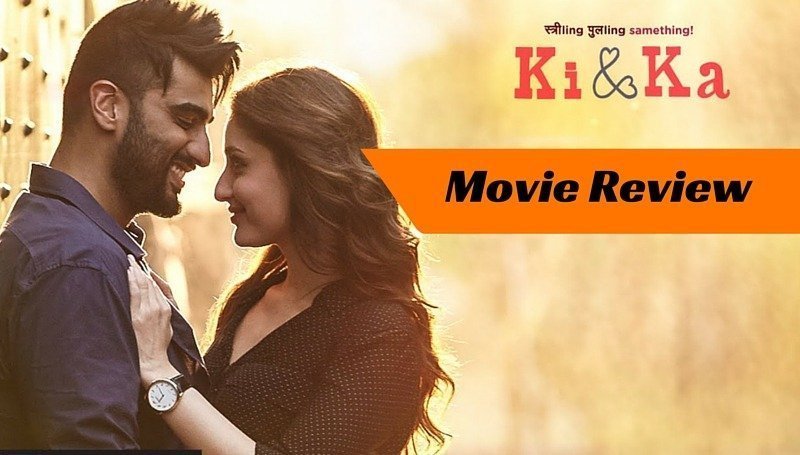 When you hear about R Balki, you can immediately recall movies like Cheeni Kum and Paa. However, having been directed a box office disaster like Shamitabh before his recent release, Ki & Ka, it was a tough call to guess how the movie will fare. We had our bets on the positive side of the coin. Did we get what we expected? Or Did the movie fail disastrously in terms of expectations? Read the detailed Ki and Ka Review here.

Ki and Ka is the latest movie release written and directed by R Balki. It features Kareena Kapoor Khan and Arjun Kapoor in the lead roles along with Swaroop Sampat and Rajit Kapoor as supporting cast. There is also a surprise package of Balki’s favorite, Amitabh Bachchan and his wife, Jaya Bachchan in cameos.

The story of the movie revolves around Kia(Kareena) who is a self-dependent working woman who is ambitious and wants to achieve a lot in her field. She meets Kabir(Arjun) who wants to become a homemaker after his marriage. They both find each other compatible with them, fall in love and get married. It is after marriage that a few disputes start to arise. Things take a bad turn when Kabir starts to get fame and recognition and that makes Kia insecure. How do they handle this conflict? This is the core focus of the movie.

Considering the level of performances that Kareena Kapoor Khan has delivered in the past, we can comfortably say that she disappoints as Kia. Arjun Kapoor acts flat for the most part of d movie but looks good as Kabir. Swaroop Sampat and Rajit Kapoor look ordinary in the movie. The highlight of performances is Amitabh Bachchan in the cameo as himself along with Jaya. It would be fair to say that he out-shadows everyone else.

The story was good. A great concept into capable hands. But R Balki fails to deliver. Apart from a few good dialogues, the script and screenplay are of below par quality. The major chunk of second half feels like a swapped version of ‘Abhimaan’ or ‘Aashiqui 2’. A lot of time in the movie is spent on the pre-marital tuning which according to us, could have been reduced. But hey! we are not the filmmakers.

The music of the movie is decent. But the tracks that Impressed in the music album fail to engage on screen. Most Wanted Munda makes some mood. But Foolishq almost takes the attention away from the storyline. The exercise song sounds good but far from pleasing. Ji Huzoori is good to hear but not enough to win back the interest of the viewers.

One of the weakest aspects of the movie. The editing feels shabby at many places. At times, it appears as if the scenes have just been placed one after another without any effort to link them.

For sure, this movie falls into the category of Shamitabh, if compared with other R Balki movies. Balki’s direction is so weak in this movie that literally for at least 90% of the time in the movie hall, the crowd did not make a single sound. And that silence was not because the movie was good. Possibly they were asleep. And yeah! The remaining 10% time includes the interval and commercials before the movie.

Ki & Ka is a movie below average in terms of capabilities of the cast and crew. It is best for the insomniacs and hardcore fans of Kareena and Arjun. As for the rest of the audience, we would suggest that you watch Kung Fu Panda 3 instead.