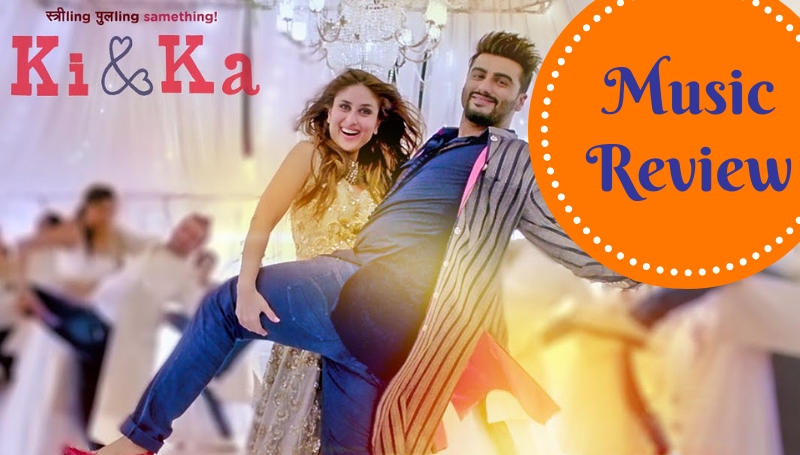 R Balki’s movies have always had exceptionally quirky songs. Be it ‘Cheeni Kum‘ from Cheeni Kum, ‘Mudi Mudi‘ from Paa, or ‘Piddly‘ from Shamitabh. He, along with Ilaiyaaraaja have always surprised the listeners. And the same was expected from their latest upcoming movie Ki & Ka‘s music. Did they live up to the same? Did the movie excite the way it should? Read our take on the same here. Also, if you were looking for the Trailer Review, read it here.

Yo Yo Honey Singh’s fans must have heard a version of this song way back in 2012. He then teamed up with Jaz Dhami. And now, Meet Bros Anjjan and Aditi Singh Sharma join their squad. With additional lyrics penned by Kumaar, the song is definitely feet tapping. And if you ask us personally, it’s better than the previous rendition. Definite party number. Expect it to be played repeatedly in clubs for, at least, the next 6 months.

Mithoon is now an established and a go-to name for soulful and soothing numbers for the album. This track does just that. Mithoon’s brilliant music and vocals, along with Deepali’s mesmerizing voice give the song a soothing feel. And Sayeed Quadri’s lyrics just add to the repeat value of the song. A sure-shot spot in the playlists of the lovebirds(especially Manju’s) is almost guaranteed. Must listen.

This Rock-n-Rolly track can make you move on your chair while listening. Meet Bros Anjjan and Earl Edgar make this song interesting and Kumaar’s lyrics are just decent. This song could have been a massive hit. But, it fails to impress and is just an average song.There is another version of this song with a prefix of ‘Kabir'(name of Arjun Kapoor’s character) to it. With a little variation in the programming, nothing much is to offer in the song. Also, Arjun Kapoor does a rap and Palak Muchhal joins in with her sweet voice. Nothing much apart from that.

And here enters ‘The’ Ilaiyaraja. A simple 4/4 song with occasionally added beats, this track is a song worth listening. Amitabh Bhattacharya shines in the lyrical department and anything that we say about Shreya Ghoshal and Armaan Malik’s vocals would be less. Anyone who liked previous songs of Ilaiyaraja will definitely keep this song in the playlist. We are talking about us as well. Listen to it.

Another Decent song. Nothing much special about this song. Probably this song might feel good in the context of the story and where it is placed in the song. But viewing it individually, this song can easily be forgotten. Meet Bros Anjjan and Kumaar could not create a magic here.

While some of the tracks are exceptionally good, other pull the album to ‘just another normal’ category. A fine mix of talent engulfed in itself, the music can be crucial in the movie.
Our Favorites: ‘Ji Huzuri’, ‘Foolishq’

Did you listen to the songs of Ki & Ka? Do you agree with our review? What track was your favorite from the album? Head down below to the comments, and let us know.