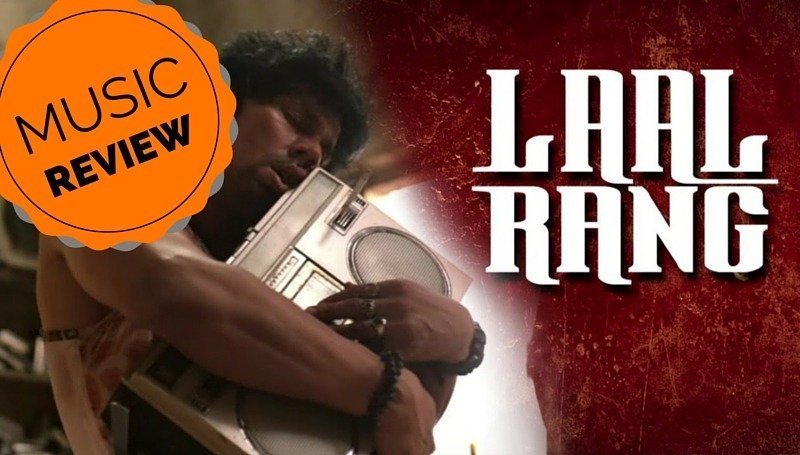 Before the trailer of the movie “Laal Rang” was released, not much people knew about the movie, but it generated the curiosity. And when the first single ‘Bhaang Ragad Ke‘ was released, we were excited about the full album. The full music album is here, and so are we with the Laal Rang Music Review.

Revamping the classical Haryanvi Folk song “Tu Raja Ki Raj Dulari” with some heavy rock beats, this song could be the new favorite for stoners. Jokes apart, we think this is a really awesome combination and does take us to a trance. However, the song drops effect during the stanzas but catches up with the hook. The song is good, but having said that, we would also like to mention that we liked Sneha Khanwalkar‘s version from the movie “Oye Lucky! Lucky Oye!” more. No harm in listening to this track, but we won’t have it in our playlist. We do expect it to be vital in the movie.

Another catchphrase taken from the Haryanvi Dialect and making a soft rock song with a roll. While Dushyant Kumar’s words enhance the beauty of the song, the real star of the song is Mathias Duplessy’s music. It really sets the mood. Also, the music has a really cute video which was released last week. We must say, that this song sung by Vikas Kumar sets us grooving to its tune. Must have in your playlist.

From the title of the song itself, it can be identified that this is going to be a romantic track. While the song is good to listen and has a catchy hook, we somehow felt it does not connect that well with the listeners. This kind of songs have been produced quite often and probably this is the reason the song doesn’t excite us. However, the credits from Shiraz Uppal and Kashif Ali cannot be taken away. Lyrics by Shakeel Sohail are decent

Here we say it. This is the best track on the album. We wonder why is it not the first or the second track on the album. The beautifully crafted lyrics by Kausar Munir are so effective that you sway with the lyrics(yeah we know we aren’t saying music here). And anything that can be said about the music by Mathias Duplessy will be less. Certainly one of the best songs of the year so far. Also, due credits to Mukhtiyaar Ali and Sameer Khan for voicing this conversation of a ‘Bandaa‘ with his ‘Khuda‘.

Ah! Another awesome track. This track is a pure gem by Mathias Duplessy. The strong lyrics by Kausar Munir effectively tell the story of the primary characters in the movie. This song is gritty and equally amazing. Also, did we already say that the music is awesome? Oh yes! we did. And we will say it again. The orchestration is really full of trance.

It is the weakest song of the album. It has all the elements. The quirky lyrics by the singer Vikas Kumar, the music for a perfect Baarat and Night Club Song. But the mix is not so great and might be enjoyed only by hardcore Haryanvi’s and drunk baraatis.

This song has a slow version as well. And it is no better than the original song. But it helps you sway with the music when the vocals are not audible. This song is so sad, the listeners might cry upon hearing it. Yup! There is a pun. However, we do hope it may yield some emotions in the movie.

Listen to the songs here.

The Laal Rang music is quite unconventional and interesting in that regards. It has some great tracks like Aye Khuda and Bawli Booch, but at the same time, it also features a track like Kharch Karod that is tough to digest as a listener. Overall, an above par album.

Did you listen to the songs of Laal Rang? Do you agree with our review? Which track was your favorite from the album? Head down below to the comments, and let us know. Also, do not forget to share this review with your friends on Facebook, Twitter, and Whatsapp. Keep Loving Music and Keep Loving Cinema.

PrevPrevious Post7 Indian Superheroes Who We Want To See on Big Screen
Next PostLAAL RANG Trailer Review: A Lot More Than Just A ColorNext