THE LEGEND OF MICHAEL MISHRA Movie Review : Nonsense with a Heart 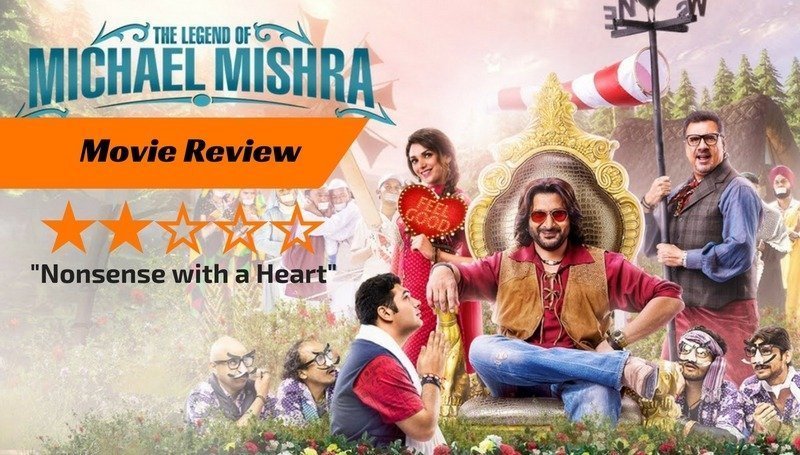 About The Legend of Michael Mishra

The Legend of Michael Mishra is a comedy movie written and directed by Manish Jha. The movie is produced by Kishor Arora and Shareen Mantri Kedia. It features Arshad Warsi, Aditi Rao Hydari, Kayoze Irani and Boman Irani in main roles.

Michael Mishra is a tailor turned gangster from Patna. He is a kingpin in the field of Kidnapping and is constantly looking for a girl whom he met in childhood and fell in love. He has since never met her and the only identification he thinks of is her voice when she says ‘Hello‘. Finally, he meets that girl, Varsha Shukla and starts living in her colony to start conversations. He decides to write a love letter and throws it to her apartment. She also throws a letter which reads that Michael should leave his way of living and be cooler as a groom should be. Michael takes it seriously and surrenders himself to police. He is sentenced to a punishment of ‘Kala Pani‘.

Will Varsha and Michael reunite? Watch the movie to know(please don’t).

Watch the trailer for The Legend of Michael Mishra here.

The story had some potential of a brilliant comedy. But the screenplay of Michael Mishra pulls it back drastically. There are utter stupid plot points which do not make any sense. The structure of the movie appears to be like a tale for children. And keeping that in mind, the minor flaws are ignored. And that includes the factors like co-prisoners of Michael wearing casual clothes, major continuity errors and what else.

The characters seem to emerge out of a Hindi comedy TV series, with the title character of Michael Mishra sounding a lot like ‘Bhabhiji‘ in the Bihari dialect. Overall, there is nothing extraordinary in the writing

Nope. There is nothing worth noticing here as well. Arshad Warsi looks to play his routine self with a Bihari accent. Aditi Rao Hydari almost crosses the line of overacting often. Kayoze impresses as the Half Pant and it was actually better than the Full Pant portrayed by Boman Irani, his real life father.

Ishq Di Gaadi is a peppy song. And so is Luv Letter. Apparently, no other song will be remembered even as soon as someone exits the theater. I personally liked Phir Tu as well, but I doubt everyone will like it is well. The movie starts with a song that reminds the Pichchar Shuru song from Barfi!. But it does not have the same magic. Below average effort at music.

Manish Jha clearly did not have a strong enough vision for this flick. He would have wanted to make a cult comedy, but ended up making a TV spoof of a possible comedy. However, we will agree that the movie has a pure heart at its core, but the movie as a piece of entertainment does not live up to the standards.

The movie is loose, has below average acting performances. The music is forgettable. The story is ignorable. However, the edit of the movie is fine and it has pure intentions. Barely watchable, this movie is best ignored. Watch Budhia Singh: Born To Run instead.