THE MAN WHO KNEW INFINITY Movie Review : Pleasant and Inspiring 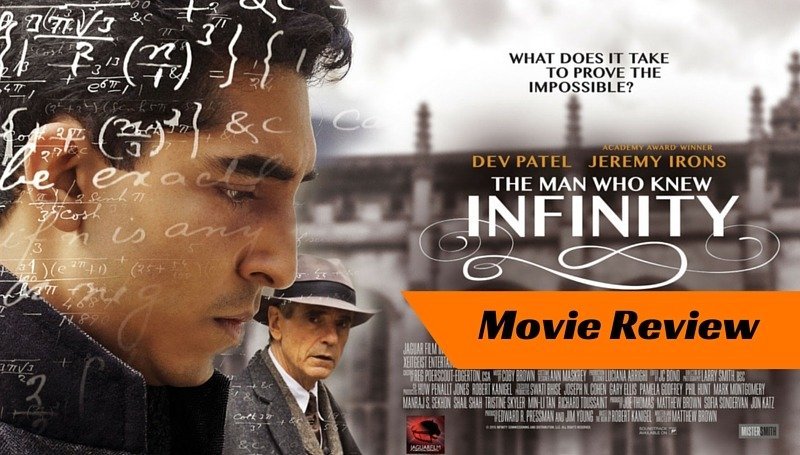 Among the flashy Bollywood releases and a big budget superhero flick, there was another recent Hollywood movie that is based on an Indian mathematician that released today. With limited shows and delayed release, this movie might have hardly caught any attention and is expected to retire from the screen within a week. But, the movie is surely a pleasant experience. Read the full The Man Who Knew Infinity Movie Review right below.

About The Man Who Knew Infinity

The Man Who Knew Infinity is based on the life of Indian Mathematician Srinivasa Ramanujan and his struggles. The movie is directed by Matthew Brown and features Dev Patel as Ramanujan along with Jeremy Irons, Toby Jones, and Devika Bhise.

The story revolves around Srinivasa Ramanujam who lives in Madras, India and is in search of a job for his skills with numbers, But since he has no prior experience or background as recognized mathematician, he has to struggle. He lands up a job as an accountant, and his employer later suggests him to write to Prof. G, H. Hardy at Cambridge to help him publish. Upon reading his letter and finding his work interesting, Hardy calls him Cambridge but his intention is to use his skills for his personal benefits. After reluctance from his family, Ramanujan leaves for Cambridge with a promise to call his wife as soon as required arrangements are done. Ramanujan has to deal with a certain degree of racism, bullying and adaptability problems along with the constant pressure of proving his work by Prof. Hardy. Hardy’s colleague, Littlewood(Toby) is kind towards Ramanujan and keeps his case. After Littlewood leaves to contribute to the war and leaves a letter to Hardy after him, Hardy becomes considerate towards Ramanujan and starts encouraging him. But till now, Ramanujan had been thoroughly consumed and catches an advanced level Tuberculosis. He somehow completes his work with Hardy before leaving to India and also gets a fellowship at Cambridge.

The writing of the movie is true to the concept and pleasant. The screenplay is fluid and no time seems to be wasted at all. The dialogues are witty and sometimes full of genuine and natural humor. Overall the writing is a plus for the movie. However, the romantic angle isn’t as engaging as the main plot of the movie.

Dev Patel as Ramanujan is extraordinary, and Jeremy Irons is exceptional as the bossy mentor. You might not get the image of Prof. Hardy putting his glasses on, out of your mind hours later you exit the cinema hall. Toby is adorable and pleasant. The rest of the cast is acceptable but not extraordinary.

The direction is acceptable, but the decision of keeping the dialogues and accents of the Indian characters in India, in fluent English, somehow raises a question. Apart from that, the complete movie looks great.

After a long day of work, if you want to have some time to yourself with some soft and meaningful cinema playing in front of you. Go watch it. Not so much fun with the friends we suppose.