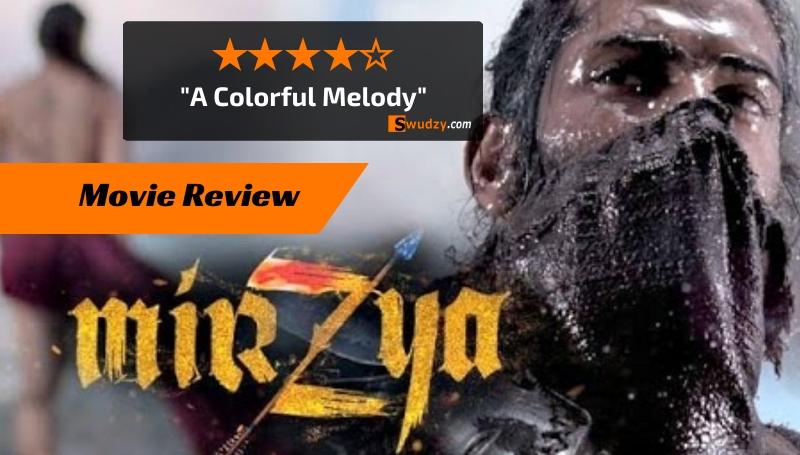 The movie opens with a brilliant aerial close in shot of the group of blacksmith women hammering the burning metal pieces. And the above-quoted words overlaying the smirking face of Om Puri firmly assures us that we are in for an epic storytelling. While walking in the theater, I was of a neutral opinion towards the movie. I knew that the movie had the likes of Shankar-Ehsaan-Loy, Gulzar Sahab and Rakeysh Omprakash Mehra associated with it. But I have also seen such big ambitious projects fail miserably before this, case in point Bombay Velvet. Regardless, the movie had a positive vibe before the release, and to what I can say, the movie satisfies a viewer like me.

Mirzya can be referred to as a retelling of the famous folklore of the Indian subcontinent ‘Mirza(Mirzya)-Saheban‘. But this tale of Mirzya Saheban itself exists in the outlying love story of Mohnish and Suchitra who are departed by fate in a young age.

Speaking of the young age, it is worth mentioning that the storyline of the childhood, in itself, is a brilliant, heart touching story. It also clearly establishes the love of Suchitra and Monish towards each other. They can go to extreme extents to save or avenge each other at a tender age of childhood. One such decision of Mirzya pulls them apart and both of them have to leave their city. This all happens in around the first half hour and undeniably, this is hands down the best part of the movie. During this time the movie rides high on all aspects of storytelling, be it visual, audio or on paper.

The storyline leaps a few years and we are introduced to Karan a prince in Jodhpur who is about to get married to Suchitra(Saiyami Kher) who has just returned from abroad. It is hinted that they share a great understanding. But this love story of Karan and Suchitra is short lived as we see Mohnish(Harshvardhan Kapoor) who has disguised himself as Adil to avoid repercussions of his act as a kid. Adil works as a groom in Karan’s stable.

On Suchitra’s wish to learn horseriding, Karan instructs Aadil to teach her. This is when the lost love reunites amidst reluctance from either side. This leap is where the narrative dips towards being boring. For a brief period of the runtime before the interval, the movie feels stretched and brings down the interest. However, right from the moment of the turmoil stepping in, the Mirzya bounces back and engages well.

Gulzar made a long pending comeback at scriptwriting with this movie. And has satisfied the thirst of all those who were counting the days for the same. The movie is full of swift use of words with meaning hidden in every word and even between them. The narration that kicks off the movie in itself is a brilliant piece of poetry and teases the brilliant wordplay about to come. Gulzar Sahab has also penned the lyrics for the songs, read the section of music for my views on it.

Ah! Harshvardhan Kapoor. He was criticized much for his looks in the trailer of the movie. And even in the movie, the person sitting beside me commented on  his looks which summed up like ‘Even the JCB drivers in my locality are prettier‘. But let me tell you all. He shows immense potential as an actor in the movie. And if given in right hands for the right movies, he might emerge as the next big thing.

Saiyami Kher put forward an equally brilliant but more subtle performance. Both the actors perhaps acted as a perfect puppet to bring out directors vision perfectly on the screen. Special mentions to the supporting act by Anuj Choudhary, Anjali Patil, K.K. Raina, and Art Malik for putting up a brilliant periphery for the lead.

Pawel Dyllus was given the responsibility of handling the camera by Rakeysh Mehra. And he has probably satisfied the director with enough flare. While I say flare, I do not actually hint at the lens flare used on multiple occasions in the movie. However, that was as beautiful as the rest of the movie. Honestly, this is one of the best camera works that I have ever seen in any movie. Such artistic use of the camera in an Indian movie is possibly never seen before. The visuals are a masterpiece in every frame. Trust me on it. This is going to please your eyes.

The Sound and Music

Aah! In the starting few minutes, while the narration shapes the story, and the blacksmiths shape the iron, the brilliant piece of music on the rhythm of their hammers just struck me hard. And ever since then, till the final credits rolled up. The music and overall sound of the movie stayed with me in and out of the hall. The peppy ‘Hota hai‘ just pumped up the excitement level. The occasional vocals of Daler Mehndi moving the story forward was another thing that I loved. The Title song was amazing. But what I loved the most was ‘Ek Nadi Thi‘. It summed up the turmoil of the characters with such great beauty. I almost clapped in every note and word of the song in my head. All through the movie and the album, Gulzar and Shankar-Ehsaan-Loy as a team worked wonders.

Rakeysh Omprakash Mehra did one job with perfect precision. It was getting the right people to do the right job. Be it the cinematography, the music, the writing, the performances, or the edit by P.S. Bharathi. Everything just fell into the right place making up a beautiful movie. At the end of the day this is what the director is broadly responsible for, making the right decisions. And Rakeysh Mehra excels here. Just the brief period around the interval, where  the narrative slows down, was the only down point for me. Apart from that, the movie is a delight.

While the movie is beautiful, melodious, meaningful, and a marvel in all senses. It is strictly meant for a selective audience. No masala enthusiast is going to love it. The movie will be better enjoyed by people who love meaningful poetry more than the rap. For others, it might be a two-hour long musical play that does not make sense. So summing up. Watch it, but for the art. Not for entertainment. The art is the biggest entertainment in this movie.

PrevPrevious PostM.S. DHONI- THE UNTOLD STORY Review: Stitching The Shots
Next PostDobara Poocho – An Initiative That Deserves To Be SharedNext