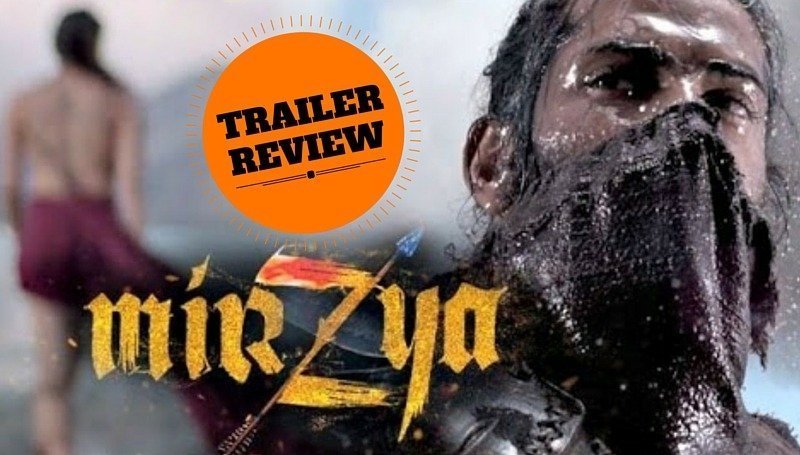 Honestly speaking, I had mixed expectations from the trailer of Mirzya. The facts that it had Rakeysh Omprakash Mehra as director, Gulzar writing the script and songs, and Shankar-Ehsaan-Loy composing the music for the movie; were enough to generate a buzz. But the fact that it had newcomers was a kind of the risk point for us. However, the trailer of Mirzya is awesome, to say the least. Read the complete Mirzya Trailer Review below.

Mirzya is a romantic-drama movie by Rakeysh Omprakash Mehra. It is said to be based on the epic love story of Mirza and Sahiba. The movie is written by Gulzar who is making a comeback as a screenwriter after 17 years, the last feature film written by him being Hu Tu Tu (1999). During this period he continued to write lyrics for songs and also wrote a short story for the movie Dus Kahaniyan.

The trailer of Mirzya is a brilliant tease. It definitely gives glimpses of the movie which are enough for attracting the viewers to the cinema halls. Also, in the process of the same, it makes sure not to loosen up any plot point or detail. Just the right amount of tease.

The trailer starts with Daler Mehndi’s voice singing what appears to be some sort of theme for Mirzya. And believe me, when I say, it is EPIC. Speaking of Epic, the cinematography by Pawel Dyllus is spectacular. It is tough to not admire the scenes with Ladakh, horses, bows and arrows in them. In short, just try to keep eyes off it, you will fail for sure.

However, talking from the negative point of view, the trailer does not have what an average Indian viewer expects from a trailer. He won’t get what he is accustomed to seeing in typical tell-it-all trailers. Also, none of the faces that he or she sees will be familiar, and it is only the names flashing on the screen which appeals to get them to theaters.

Regardless, I thought the trailer was awesome and we will definitely go to watch it First Day, First Show. Let’s just hope it pays off well.

Watch the Mirzya Trailer yourself here.