MOHENJO DARO Movie Review : A Spectacle Worth a Watch 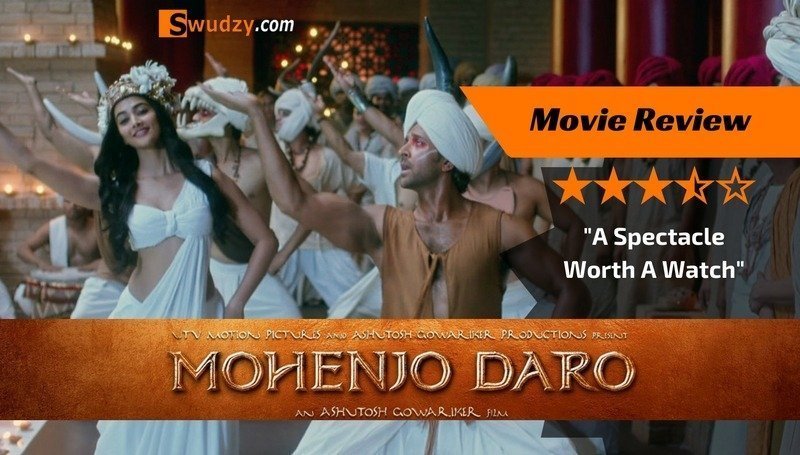 Two big movies released in theaters this week. The first was Akshay Kumar‘s Rustom, and the second was Hrithik Roshan starrer period drama Mohenjo Daro. With more than half occupancy of a morning show, we can say that Mohenjo Daro received a decent start for the day. And the movie, even if did not excite the audience, did not disappoint much. Read the full Mohenjo Daro Movie Review now.

Sarman is a young man from Amri village in prehistoric times of 2016 B.C. He has been requesting his uncle, Durjan(Nitish Bhardwaj) to let him go to Mohenjo Daro for trade. Finally, he convinces the reluctant uncle who agrees on the condition that Sarman would stick to the prices in the barter, and never be distracted by anything or any person. Sarman reaches Mohenjo Daro and is awestruck by the facilities, architecture, and infrastructure. However, he also senses greed and is set to leave the city until he spots Chaani(Pooja Hegde) who is the daughter of the city priest(Manish Chaudhary) and is considered the cause of the new sun of Mohenjo Daro by Sindhu Ma’s grace. He falls in love with her and stays.

During his stay, he raises voice against the injustice of the chief of the city, Maham(Kabir Bedi) and his son Mooncha(Arunoday). Meanwhile, Chaani also reciprocates the love to Sarman. But she reveals that her Sangam has been fixed with Mooncha. Mooncha spots them together and indulges in a scuffle with Sarman. Subsequently, Sarman is captured by Maham and sentenced to death, but upon the request of the priest, gives him a chance to survive in a colosseum battle.

Before the battle, Sarman is visited by the priest and through him, finds out that he and the city are deeply connected. Sarman’s father Surjan(Sharad Kelkar) was the chief of the city before Maham and was dethroned by unfair means. Since then, their family lived outside Mohenjo Daro and Maham continued to exploit the people and resources of the city to avenge his insult by the Harappa city. Sarman decides to fight for justice and the city.

As evident from the description above, the story his cliched to the core and extremely predictable. The screenplay is slow and I actually thought the movie was not going to have an interval as the first half itself stretched for above 1.5 hours. It truly tests the patience of the audience. But frequent comic reliefs and occasional interesting plot points retain the attention. The dialogues, on the other hand, have had some serious efforts put into them. A dialect that is so different from the normally spoken dialects has been kept intact throughout the movie. And there are some words that are bound to be repeated like the words ‘Charpat‘ for an idiot and the twisted cuss word ‘Hamalkhor‘. The phrase ‘Lakh Lakh Thora‘ also is worth remembering.

The characters do not have enough depth and the whole story focusses on Sarman as the sole protagonist and Maham as the kingpin antagonist, who does not appear intimidating at all on the papers.

Hrithik Roshan is the sole focus of the movie and he understands that very well. He embodies Sarman effectively and is completely believable. He has got some serious acting abilities and now everyone must have understood that. Needless to say, he was the main attraction of the movie. The debutant Pooja Hegde looks heavenly and gorgeous as Chaani, the chosen one. She puts forward some expression that will make you change your phone wallpapers. But apart from that, her acting abilities have not been explored much. She is just a plot point in the movie and nothing substantial.

Kabir Bedi adds a certain evilness to the character of Maham that the papers missed. Arunoday Singh is extremely effective as Moonja and even when he doesn’t speak a dialogue, his body language expresses the pride and power. The supporting cast, however, is sidelined to a great extent as there is not much to perform. Even the sidekick of Sarman is overlooked for a large chunk of his screen time.

The music has been effectively and efficiently used in the movie. The songs might not appeal in the first round of listening, but they are bound to leave an impact on subsequent listens. The use of themes as well in the movie is phenomenal. A R Rahman successfully manages to convince that this might possibly have been the kind of music in that period. The best piece in terms of musical beauty is ‘Tu Hai‘ which is sung both for the protagonists, as well as the Sindhu river. We liked the title track as well.

Here comes the scapegoat. Most of the people that saw the trailer of Mohenjo Daro complained that the effects were unrealistic. And that is exactly the case. Many elements in the movie can be easily spotted to be animated. However, the final flood sequence gels up with the narrative and we are not able to point the water being CGI. And this is a good sign for CGI. Summary – The effects overall in the movie are average or below average, but the climactic scene is brilliantly executed.

All hail the captain of the ship. Ashutosh Gowariker definitely deserves much respect for this movie. Even if the execution was not perfect in all the instances, the vision of the director itself is worth praising repeatedly. Also, another aspect that I would love to mention is the explanation given by him for using a dialect that is relatable to Hindi for a prehistoric period. The movie starts in gibberish and right when everyone starts thinking that they are not understanding anything, there is a dolly/zoom in on a person speaking gibberish and suddenly the mouth starts speaking Hindi and we understand everything. Honestly, such beautiful tool to show the transition of language has never seen before by me.

On more obvious aspects, the art direction of the movie is effective and well guided and we can believe the sets to be actual Mohenjo Daro. He has managed to execute a movie of this scale even if not perfectly, but believably. A big, big salute for the direction.

Mohenjo Daro is a movie that you might find boring but if paid attention to, you will appreciate the vision behind it. We can see a lot of effort and heart put into the movie with noble intention. But that all can only be noticed if the audience manages to stay awake for the long-running hours of the movie. In conclusion, we can only say that if someone does not appreciate the movie, he is a charpat. You might not love it. You might not like it. But you cannot resist but notice it.

The movie is a good option to watch, but Rustom wins if chosen between the two releases of the week.