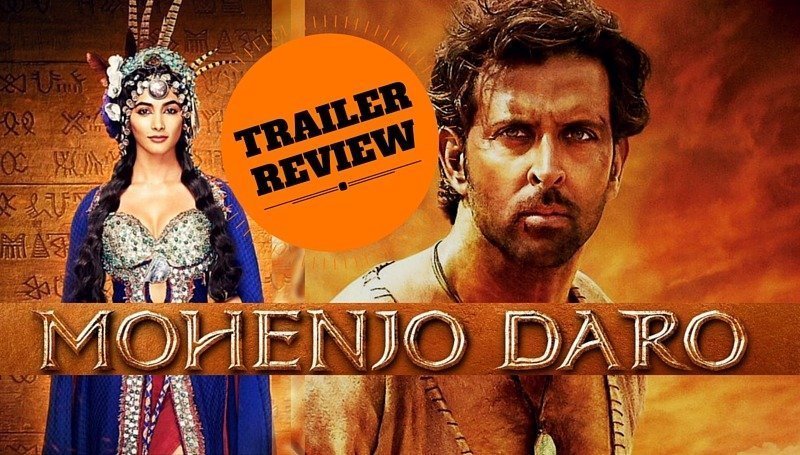 The much awaited period movie by Lagaan and Jodha Akbar fame Ashutosh Gowariker, Mohenjo Daro is about to release in August. The makers have been dropping posters for the movie for quite some time now. But it was today that the official trailer of the movie released. In spite of carrying the trademark lavishness and seriousness of an Ashutosh Gowariker movie, this still does not connect so well with the viewers. And although it is gaining rapid likes on YouTube, the same platform is also attracting some critical comments. Is the trailer good or bad? Read the Mohenjo Daro Trailer Review by us below.

From what appears to be in the trailer, the movie will follow Sarman(Hrithik Roshan), an indigo farmer from Amri, who has some connection with the city of Mohenjo Daro that he doesn’t know of yet. There the evil man ‘Maham‘(Kabir Bedi) is about to destroy the city and Sarman comes to know it. He will discover his past connections with the city and will fall in love with Chaani(Pooja Hegde), who appears to be some sort of princess.

Well, one of the major attractions of the trailer is that it successfully takes the audience to the concerned era through various aerial shots and landscape sceneries of the city. The dialect that the characters speak in the start of the trailer tries to add to that. And even if we are no experts in history, it somehow does not sound convincing enough.

Talking about the cinematography showcased in the trailer, most of the shots look straight away lifted from other movies. For instance, the shot that introduces Hrithik in the trailer reminds us of literally any Salman Khan movie ever(literally used in a figurative sense).

Since we mentioned Hrithik, I would like to point out that Hrithik looked a little too over the top in this trailer. We sensed a pinch of overacting mixed in his screentime. However, other main characters, Kabir Bedi and Arunoday Singh look menacing. Kabir Bedi would be one of the few reasons that we will be watching this movie. Pooja Hegde, despite being the female lead, does not get any spoken lines in the trailer. She looks royal and beautiful, though.

The visual effects of this trailer make you remember Baahubali. Don’t get us wrong, we are not equating the two. It’s just that, the effects make you want to say ‘Baahubali mein Better the boss‘(Baahubali had better effects, boss). However, the trailer gets full marks for the authenticity of the city(city, city, see what we did there?? *hihihi*). The scenes showing the grand nature of the city of Mohenjo Daro are the best part of the trailer. They really set up the importance of the city as a character in the movie.

The music that is used in the trailer is one of the best parts of the trailer. It does make the trailer look much more important than it otherwise is. We will be eagerly waiting for the music release of Mohenjo Daro.

Hard to take all of that in? Watch the trailer here as you read the analysis again.

And yeah! Do not forget to check out all the latest videos by Swudzy on YouTube where we regularly publish original entertaining content apart from the stuff at Swudzy.com website. Recently we made a short movie on student suicides from result pressures. Watch the movie, JUMP right here.

PrevPrevious PostNOW YOU SEE ME 2 Movie Review: Charm and Tricks
Next PostThe 100th Post : A MilestoneNext