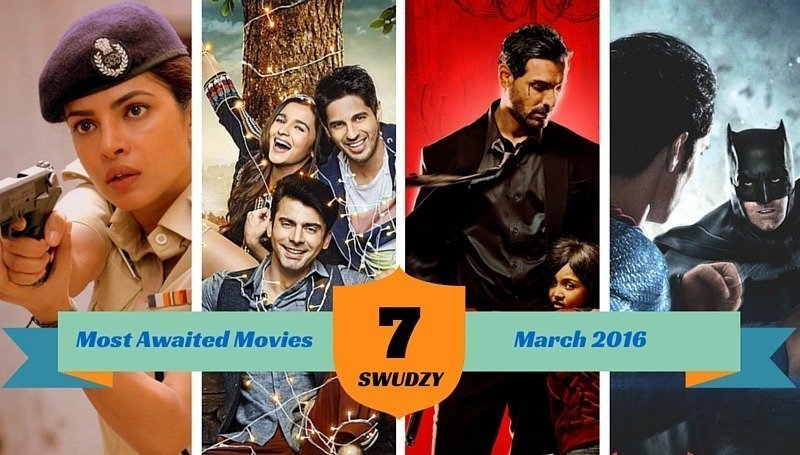 With the month of February about to get over, a lot of movie buffs are ready with their popcorn buckets to watch what is in the store of March. We at Swudzy.com give you our picks of the Top 7 Most Awaited Movies of March 2016.

Kicking off our list is none other than the highly awaited sequel to the 2003 Police-Drama movie Gangajal. Jai Gangajal features Priyanka Chopra as police-woman Abha Mathur who is appointed as SP of Bankipur District, Bihar. While similar stories have been touched upon in multiple movies before, it is still interesting to watch what the director, Prakash Jha has to offer, who himself will be seen sporting the role of an officer under SP Mathur.

Here is another cop movie, but there is no human in it. Zootopia is the latest offering by Disney and is a story about the fictional world of Zootopia inhabited by anthropomorphic animal species where a fugitive con artist fox and a rookie bunny cop have to work together to uncover a conspiracy. The trailers and promos are already making a buzz among the children and youth alike and the movie looks promising.

You can like him, you can hate him, but you cannot deny the fact that Himesh Reshammiya is one of the leading music directors of Indian movie industry who has the capability of giving massive blockbuster music. Although his acting abilities have been constantly under questions, he is back with another offering after the infamous ‘The Expose(2014). The music as obvious is making a buzz and a part of the audience would want to try how engaging the Surroor is.

The trailer of this movie was a big WoW. The screen presence of Alia Bhatt and the glimpses of awesome performances by the ensemble cast consisting Fawad Khan, Siddharth Malhotra, Rajat Kapoor, Rishi Kapoor and Ratna Pathak Shah along with Bhatt. The party song ‘Kar Gai Chull’ is on the lips of everyone and the movie looks like it will be fun to watch with friends.

Masti was a hit. Grand Masti was a Superhit. It makes the wait of Great Grand Masti a center of attraction for a lot of eyeballs. With a great grand record in the Adult-Comedy genre, it is to be seen how Indra Kumar will be able to replicate his success with the recent similar movies ‘Kya Kool Hain Hum 3’ and ‘Mastizaade’ doing not so well business at the Box Office. With less than a month remaining before the release date, it is still unclear why there is no trailer running around on web and TV.

Ending the month will be the latest offering by ‘Drishyam’ fame Nishikant Kamat. He joins hands again with his ‘Force’ star John for this latest movie. While the songs of this movie are definitely worth replays, the presentation of another adapted screenplay by Kamat is anticipated to be worth watching.

To tackle Rocky, Warner Bros. bring the mightiest characters from the DC Comics universe, The caped crusader and the Man of Steel. With Ben Affleck donning the black capes almost 3 years after Nolan-Bale’s Dark Knight Trilogy; it is definitely worth watching how he tackles Cavill as Superman.The trailers released so far have only increased the excitement of geeks and fans alike.
And oh yeah! Gal Gadot is in it too, playing the Amazonian warrior princess, Wonder Woman.

Among the big releases, there are two more movies, “Zubaan” which stars ‘Masaan’ fame Vicky Kaushal in the lead along with Sarah Jane Dias; and “Do Lafzon ki Kahani” starring Randeep Hooda with Kajal Agrawal. They could not make the list but definitely are interesting to watch.

So this was our pick of Top 7 Most awaited movies Do you agree with our list? What movies are you waiting for to release in march 2016? Head down to the comment box below and write down your picks. Also, do not forget to share this list with your friends. We will be back with another list soon. Till then, keep reading Swudzy.com for latest movie reviews and articles about movies.