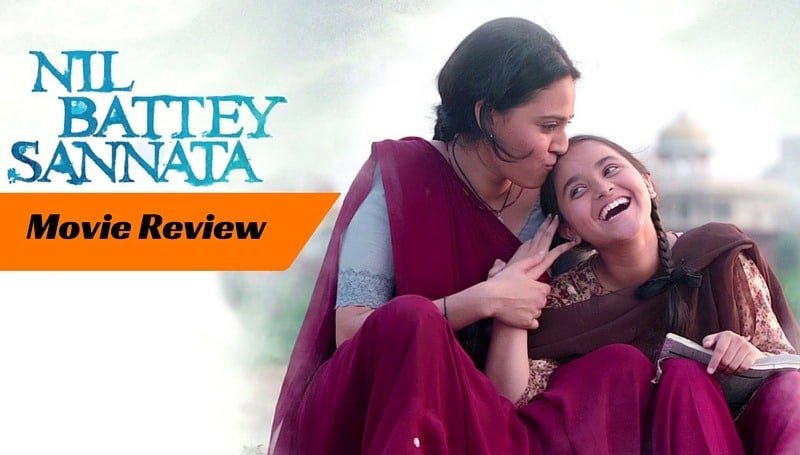 The second release of the week is Ashwiny Iyer Tiwari’s Nil Battey Sannata. Among a series of smiles and claps by the limited viewers that went to watch this marvel, the movie shines out bright. Read the full Nil Battey Sannata Movie Review below.

The movie is set in Agra, where Chanda(Swara) is a housemaid that works various other jobs as well to save money for her daughter, Apeksha(Riya)’s further studies. On the other hand, the daughter is loosely unambitious and gives no time to studies, especially mathematics. On her mistress’s advice, Chanda starts going to the same school as her daughter. In addition, all of Apeksha’s friends become close to Chanda. This leads to the relation between mother and daughter turning sour. The story attempts to explore the relationship between the two, in the backdrop of class 10th school life.

The writing of this movie is pure brilliance. The story follows the conventional 3-Act structure and is heavily character-centric. All the characters are written with due care and have a huge degree of believability associated with them. None of the events of the screenplay seem superficial. The best part of the movie is its dialogues. For instance, here is something that Chanda says to Ratna Pathak Shah’s character about her own daughter:

This is not the only marvel as the movie is full of such awesome dialogues. However, towards the end of the movie, the plot weakens a bit but not enough to affect the overall piece.

Swara Bhaskar is as natural as always. She plays the worried mother with complete ease and believability. Ratna is acceptable in her role which acts as a support mechanism for Swara’s performance.

The cake of the movie, however, must be given to Pankaj Tripathi as the Mathematics teaching Principal and Riya Shukla, who plays the unambitious daughter of Chanda. Both of them steal the scenes when in the frame.

The music of the movie is great in adding value to the narrative. Songs like Maths mein Dabba Gul and Murabba make you smile with the movie, thanks to the brilliant lyrics. Whereas, Maula makes you feel the character’s struggle. We missed ‘Maa‘ in the movie as the closest we get to the track is the theme music playing in the background. No vocal version in the movie.

Ashwiny Iyer Tiwari deserves a pat on the back for making such a beautiful movie. Building such realistic characters and making the actors turn that vision into reality, is a great job.

Nil Battey Sannata is a beautiful movie about a mother and daughter which should be watched with your mother. The brilliant dialogues are the soul of the movie, and the physical form is constructed by an awe-inspiring acting performance by the main cast.