NOW YOU SEE ME 2 Movie Review: Charm and Tricks 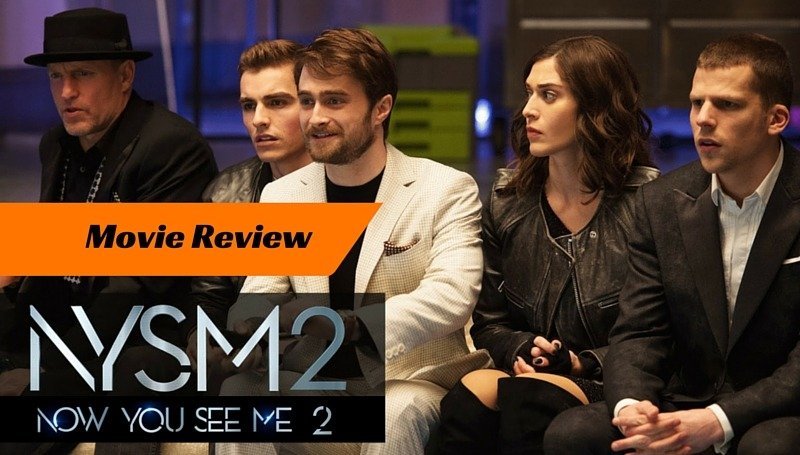 Now You See Me, the first movie in the series was a great treat visually but it carried some plot loopholes. Now You See Me 2 is a worthy successor in that regards as it also does the same. It amazes with the visual aspects but confuses with the plot. Read full Now You See Me 2(NYSM2) Movie Review

It has been a year since the events of the first film and the horsemen are living undercover. The secret organization of magicians, The Eye, give another mission to the horsemen through their current leader Dylan Rhodes(Ruffalo). They are joined by illusionist Lula May(Lizzy) who enters as a replacement for Henley Reeves. They plan to hijack a corporate function to reveal the corporate’s true intentions, but in the process, they discover that they have been trapped and some of their secrets are revealed along with Dylan’s involvement with the horsemen. All the horsemen except Dylan are tricked and taken to Macau, China.

In Macau, a wealthy tycoon Walter Mabry(Daniel Radcliffe) awaits them. He is dead in the eyes of the world. It is revealed that he was one of the investors in Arthur Tressler‘s bank which was looted by the horsemen in the movie. He asks them to steal a chip which might help him keep his identity secret. Daniel(Eisenberg) steps up as their new leader and accepts the proposal. However, he also gets in touch with the Eye to help them out.

Watch The Trailer of Now You See Me 2  here.

The story of the movie is interesting, and so is the screenplay. However, it does have some loopholes in the plot. And some confusions that are not satisfactorily solved. Some of the horsemen’s tricks seem illogical and unbelievable to fall for. The characters are also underdeveloped and hence, it is hard to connect to them. The movie, just like its predecessor, is good till the end of the second act. However, the third act appears to be rushed into. The dialogues are extremely ordinary and you won’t remember any of it after the movie.

Jesse Eisenberg is good on his part but seems to make no special efforts for the role. He appears to underplay the role. Lizzy Caplan is loveable in the shoes of Lula and her smile is infectious. Daniel Radcliffe as the maniac mastermind is not convincing enough and we just hoped that somewhere int the movie he will pull out his wand and yell ‘Avada Kedavara‘. Same goes with Mark Ruffalo, he is good, but the charm of Bruce Baner is missing. Just kidding, he is impressive in the movie. However, rest of the cast is forgettable, including Mr. Freeman.

The real star of the movie is the visual effects. You sit at the edge of the seat to see what will be the next trick of the horsemen, not because they are vital to the plot, but because they are just so awesome to watch.

The movie is not a masterpiece, to be honest. It is just another average movie with eye-catching visual effects and cinematography. The pace and interest in the movie are both not dealt with due care and are lost in the process of the storytelling. However, sequences with the horsemen tricking the victims of their missions is a treat to watch.

The movie is watchable for the moments and not for the plot. It is skippable easily. This week, Finding Dory or Udta Punjab will be a better option to watch.