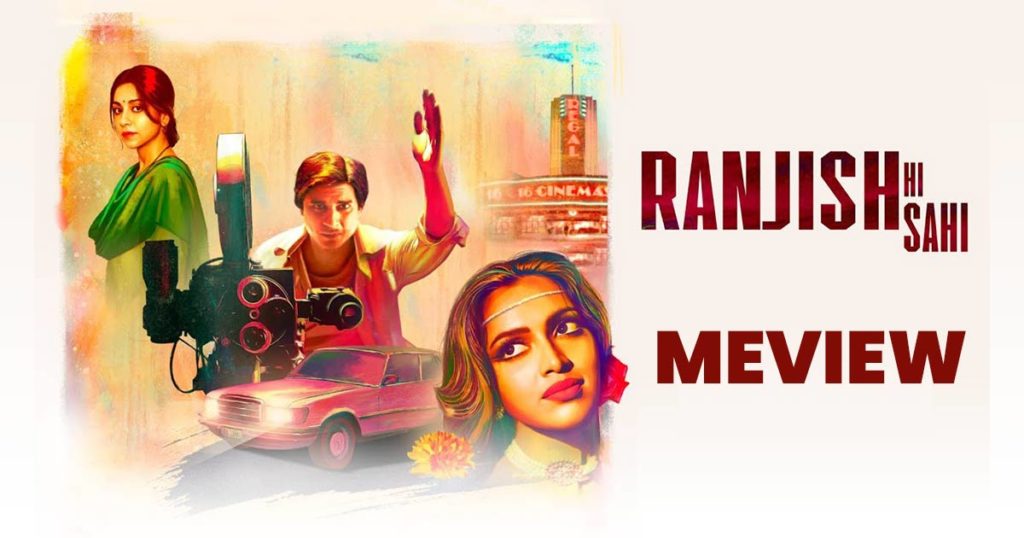 Mahesh Bhatt is a brilliant filmmaker. Not only does he make amazing movies like Arth, Saaransh, Aashiqui, Zakhm. But he along with his brother Mukesh has also produced a lot of movies, including Raaz, Kalyug, Gangster etc. And TV series like Swaabhimaan, and you get my point. But time and again, he has also been diving into making movies about his own life. Movies like Zakhm dive into his childhood, while movies like Arth and Woh Lamhe (produced by Bhatt), reflect on his relationship with iconic actress Parveen Babi. Adding another name to this list is the Web Series “Ranjish Hi Sahi” which is written and directed by Pushpdeep Bhardwaj, and co-produced by Mahesh Bhatt, who also serves as the Creator of the show, in the title credits.

While the story nowhere mentions names of real persons, they are easily hinted at. Mahesh Bhatt becomes Shankar Vats, Parveen Babi becomes Aamna Parvez, Mukesh becomes Ganesh. Pooja becomes Aarti. and so on. Even the movies mentioned in the series are clear references, with Ajay, Anwar, Albert referring to Amar Akbar Anthony and Mahesh Bhatt’s movie “Lahu Ke Do Rang” being referred to as “Do Rang“.

Given that most of the time I went through the series, I kept spotting the references thrown in it. It really is worth mentioning, that beneath it, lies really good storytelling. Except for the sometimes rather boring dialogues.

Shankar Vats is a struggling film director, who is a rebel of his own sorts. He lives with his mother, brother, a loving wife and a daughter. He has already made three flop movies, and if another one of his movies flop, he might have to end his career. Fate makes him meet Aamna Parvez, a superstar actress, an A-lister. She herself has her troubles. BIG Troubles. Aamna is in a toxic relationship with another actor and also struggling with her psychological health. She decides to leave her mental health unaddressed after a reporter gets a hint of her appointments with a psychiatrist, and being a mental patient, would mean an end to her career and reputation. Shankar tries to convince Aamna to star in his movie, which does not happen, but they start meeting more often and develop a bond. Meanwhile, Shankar’s monetary situation worsens, and he has to go and ask Aamna for money. But one thing leads to another, and Shankar ends up getting intimate with her. Believe me, it is not that odd in the actual series).  Now I wouldn’t spill everything else. But this was the point, when Shankar thinks, he Messed Up. And the lives of Shankar, Kiran, Aamna, and everyone else changes from then on.

The treatment of the story by Pushpdeep is something that I liked as well as sometimes questioned. While the characters are well constructed, with due depth to each one of them. But the philosophical angle to some dialogues, especially those by Zareena Wahab’s character (Shankar’s Mother) and a mysterious Watch-Man character, which is an artistic choice; is really boring to be blunt. The use of music is brilliant in the series. And while the series starts slower, it picks up the pace and the last three episodes, I watched in binge mode. The others, I watched one episode at a time. A flashback episode of Shankar’s childhood, while setting up his character, seemed stretched. And so are most dialogue-heavy moments in the series. Well, most of the series is dialogue-heavy, but you will understand what I am trying to say when you see the series if you see the series.

Performance is the biggest star of the show. particularly Amala Paul‘s portrayal of Aamna Parvez. She brilliantly embodies her pain, her love for Shankar, and all the darkness in her emotions. Her part is brilliantly written as well. Due credits to the writers. Tahir Raj Bhasin‘s character is brilliantly portrayed by him as well. He makes bad choices, but you do understand why those choices were made. Amrita Puri‘s portrayal of Anju is amazing as well. You feel her frustration through her performance. A highlight of the brilliant performances by the leading ladies is the ‘only scene‘ where they both come face to face. Aamna arrives at Anju’s doorstep, dressed as a bride, with Bond papers in his purse, to get her to sign for divorce. And both the ladies, act in subtexts, Amala with her complete body language, and Amrita with her eyes. That scene alone is worth watching the whole series for me.

Yes. Definitely. The performances make the show watchable, despite some stretchy writing in an otherwise well-written show. But if you are limited on time, and are looking for a rather exciting watch, you should consider watching “Yeh Kaali Kaali Aankhein” on Netflix instead. Coincidentally, it also stars Tahir Raj Bhasin in the middle of two amazing ladies. Read about it more here.

Did you watch the show? Did you like it? Tell me in the comments. Along with any movie or series recommendations for me that you have. I will be back with another MeView soon. Till then, keep watching this space, and keep loving cinema.