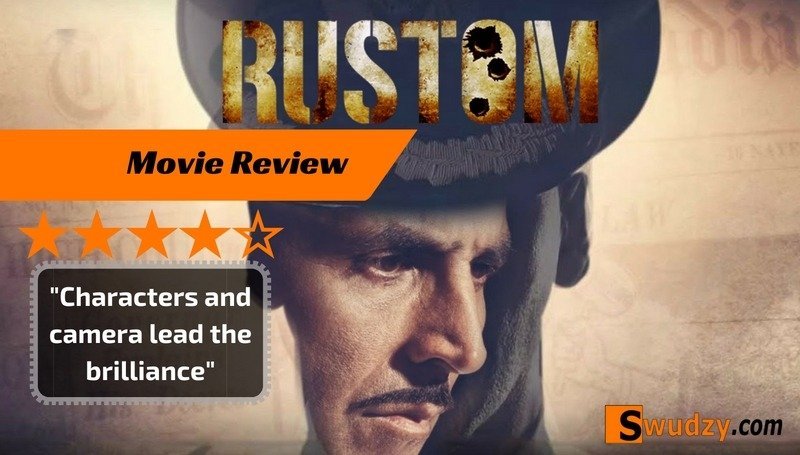 Airlift kicked off the year for Akshay Kumar and then came Housefull 3 which was loved by the fans. He has so far managed to please everyone this year. And with his latest release Rustom hitting the theaters, it was expected that he would build on to his performance. And needless to say, audience embraced the movie with a houseful in the second show of the day(for the first show, we were watching Mohenjo Daro). But did the viewers come back with satisfaction? Read the full Rustom Movie Review now.

Rustom is a fiction drama movie produced by Neeraj Pandey and directed by Tinu Suresh Desai. The movie is partially based on the infamous K. M. Nanavati v. State of Maharashtra case, which was followed by the abolition of Jury system in Indian judiciary. Rustom features Akshay Kumar as the title character along with names like Ileana D’Cruz, Esha Gupta, Arjan Bajwa, Sachin Khedekar, Kumud Mishra, Pawan Malhotra and Usha Nadkarni.

Rustom Pavri(Akshay Kumar) is a commander in Indian Navy and has returned from his ship a week earlier. He reaches home to find his wife, Cynthia(Ileana) absent and his maid(Usha) informs that she is with Vikram Makhija(Arjan Bajwa), a friend of Rustom. Rustom also finds letters sent by Vikram to Cynthia and asserts that his wife has been cheating behind his back. He goes to meet Vikram after issuing a gun from a Naval ship and kills Vikram. He immediately goes and surrenders to police in the presence of Inspector Vincent Lobo(Pawan Malhotra).

Vikram’s sister(Esha Gupta) appoints Lakshman Khangani(Sachin Khedekar) as the prosecution lawyer and is determined to convict Rustom. On the other hand, Rustom does not want to fight his case. Meanwhile, Erach Billimoria(Kumud Mishra), editor of a tabloid, is heavily involved in the case and its stories to make big bucks through the case. With the turn of events, Rustom decides to plead not guilty and wants to fight his own case.

The film clarifies in the start that it is inspired from the Nanavati case, but has introduced some additional characters and events for the purpose of dramatization. This leaves an endless opportunity for the writers to explore the possibilities. However, the story is quite predictable and lacks luster. But this drawback is brilliantly compensated by the crisp and exciting screenplay. One of the parts that we loved was the growth of the tabloid from 4 annas a copy to 5 Rupees per copy symbolising the increasing significance of the case in the movie. Rustom grips the viewers tightly to the screen.

Also, the movie features some awesome dialogues. While speaking about dialogues, I must mention the brilliant characters that the writers have woven. My favorite being the editor Erach and his assistant. However, not all characters are that awesome as the character of Cynthia is one of the least believable characters in the movie. Overall, the writing is a plus, thanks to the dialogues and screenplay.

Akshay Kumar graces the role of Cdr Rustom Pavri brilliantly. He is every step believable as a decorated Naval Officer. Akshay perfectly captures the demeanor of the character. Ileana seems to suit the ‘era’ movies. We loved her in Barfi! and since then, there was not as much acceptance. But this movie again makes us fall for her. She has the grace and beauty for the role of Cynthia. Arjan Bajwa had an important aspect of the movie to play but isn’t that impressive at that. However, Esha as his sister is worth noticing. She is possibly playing the strongest role of her career so far.

Having said that, the supporting cast of the movie is as good as the main cast. Kumud Mishra leading the supporting cast is brilliant as the parsi editor. Also, the chemistry between him and Anang Desai is strangely awesome. Pawan Malhotra as Vincent Lobo and Usha Nadkarni as the maid also impress.

The movie’s music starts off great with Atif Aslam crooning ‘Tere Sang Yaara‘ which is brilliantly composed by Arko Pravo Mukherjee. But apart from that, the use of music is restricted and mediocre. The music pumps up the screen near the second half with ‘Rustom Wahi‘, but that and nothing after that. The music overall is a bit average.

Rustom is a Huge Huge Improvement in terms of direction by Tinu Suresh Desai. Especially after his last movie, 1920 London being panned by the critics and audience alike. Rustom has a flare and is way more engaging than the previous venture. The major factor which I thought affected the movie was the cinematography by Santosh Thundiyll. Especially the scene where Inspector Vincent Lobo conducts primary investigations with all the concerned parties. Apart from that part also, the use of light and darkness in this movie is worth studying. It is one of the best use in this year so far.

Another factor was the brilliant edit. If not the best, it was one of the best edits this year. Tinu also managed to get the right amount of performances by his lead actors and supporting cast alike. Overall, it is a big plus for the direction.

Rustom is packed with lots of entertainment with brilliant camera work, effective lighting, and praiseworthy performances. The story might be predictable but the screenplay is engaging. The music is good but contributes less to the film apart from Tere Sang Yaara. Trust us, having said all that, the movie is a good watch. Pretty close to a must watch. It is a complete value for money and repeated viewings might follow.

PrevPrevious PostTHE LEGEND OF MICHAEL MISHRA Movie Review : Nonsense with a Heart
Next PostMOHENJO DARO Movie Review : A Spectacle Worth a WatchNext