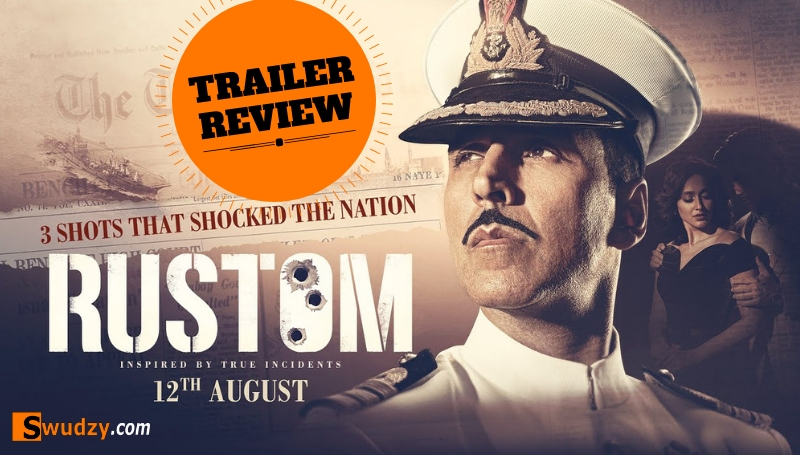 The Nanavati case was a highly popular and singificant case in the indian judiciary history. But to be honest, I did not know of that case right until Rustom was announced. The act by Akshay Kumar on the stage of Zee Cine Awards definitely generated the curiosity for the movie. And the recently released trailer added up to the excitement of the movie. Read the full Rustom Trailer Review below.

The movie is based on the infamous Nanavati case in which a Naval officer, here Rustom Pavri(Akshay Kumar) finds out that while he was away, his wife had an affair. Ultimately he winds up killing the lover of his wife. However, the story doesn’t end here and there is much more to the thrill of the suspense.

The trailer of Rustom promises a lot more than one would have been expecting from the movie before watching the trailer. The trailer starts with extreme closups of Rustom Pavri(Akshay) wearing his Navy uniform. Along with that is a monologue in his voice setting up the sincere and patriot side of his character. Immediately a tease of his romantic interest and wedding is given with amazing vocals of Ankit Tiwari in ‘Tay Hai’. This is when the first conflict is introduced with the wife cheating and him killing the lover. Many of us thought, that this was the main plot of the movie. But from what I understood, this is just a minor setting of the greater canvas of the movie. The following images in the trailer carefully carve the movie as a promising suspense thriller with enough ‘wooshes’ and thrills.

The Rustom Trailer gives glimpses of fine performances by Esha Gupta and Ileana D’Cruz, but we are most excited for another gem of a performance by Akshay Kumar. Along with Housefull 3 and Airlift performing farely well at the box office as opposed to some of the major disappointments of the year. We expect Rustom to be as good as a money churner at the box office.

Watch the Trailer of Rustom here.