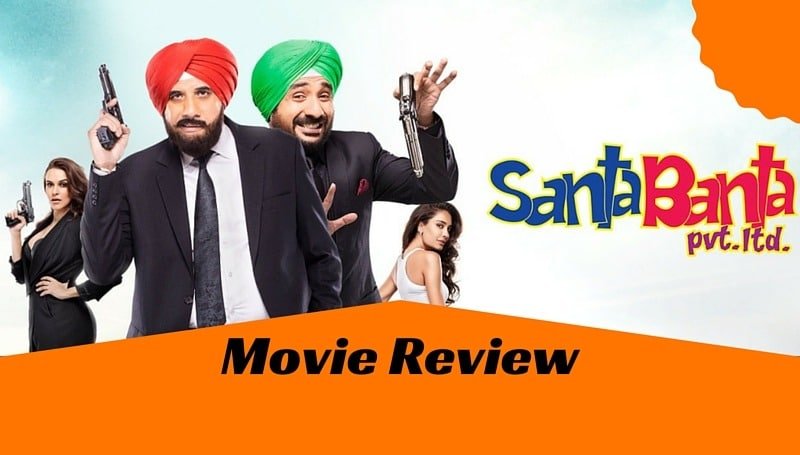 Two legendary characters of Indian humour literature, Santa and Banta got a chance to turn live action with this week’s release ‘Santa Banta Pvt Ltd‘. And to our dismay, we can just say that we wish this had not have happened. Read the detailed Santa Banta Pvt Ltd Review below.

The movie’s story(if there was one) revolves around two friends, Santa and Banta who are insulted in their hometown repeatedly. One day, they get spotted by a RAW agent and is confused for two agents of the same organisation. They are sent to Fiji to investigate the kidnapping of Indian High Commissioner(Ayub Khan) in Fiji. There they are encountered by various characters like High Commissioner’s wife(Neha), his friend Sonu Sultan(Ram Kapoor), a Nepali Don(Johny), other Raw agents(Lisa and Sanjay) and more.

Watch the trailer of the movie right here.

There is no story in this movie, it is practically a not so decent approach at forcibly trying to weave a story and plot around two characters and a lot of age old gags. The screenplay of Teraa Surroor was crispier than this movie. The dialogues are plain, and taken straight from joke books on Santa-Banta. Countless jokes on Santa and Banta’s stupidity, feel stuffed. Only one gag, involving the name of Ram Kapoor’s character is genuinely funny. And most of this credit goes to the performers. There is also an attempt to recreate the iconic ‘Assassination of Sultan Khan’ scene’s phone conversation from Gangs of Wasseypur II. A failed attempt that is. No cause and effect relationship is seen in events of a major chunk of the movie. We feel that we can go on and on about this.

Many characters like the Nepali Don, could have been easily avoided as they neither add to the laughter nor the narrative. A lot of gags were left unfinished. The events of the movie do not pay off at the end like any suspense movie should. We feel that we can go on and on about this.

While the performance of any actor in this movie is not great, we cannot complain much about the same as well. Boman and Vir try to resurrect the dead script with their efforts in performance, but clearly, they do not succeed in it. And not just them, all other characters try, but do not succeed in giving a good performance.

The music of the movie can be better referred to as noise. All the songs have heavy beats and loud compositions. Sonu Nigam‘s voice is the only good thing about the total album. Moreover, none of the songs in the movie looked like it was needed. Forced songs, divert the audience’s attention from the narrative(there isn’t a narrative in the movie).

Weak and Weaker, the direction travels in the distance between bad and ugly. A lot of efforts are wasted on stuff that wasn’t required. For example, the animation sequences used in the movie serve no purpose and the world could have lived without those animation pieces. Or even better, if they were supposed to be used, they could have been placed at places where they were either required or add to the narrative in any way. The control over the script was clearly absent.

The movie is an atrocity in itself. Nothing in the movie works for it. The movie can be easily avoided and even better, invest the money in a better movie like Laal Rang or Nil Battey Sannata.