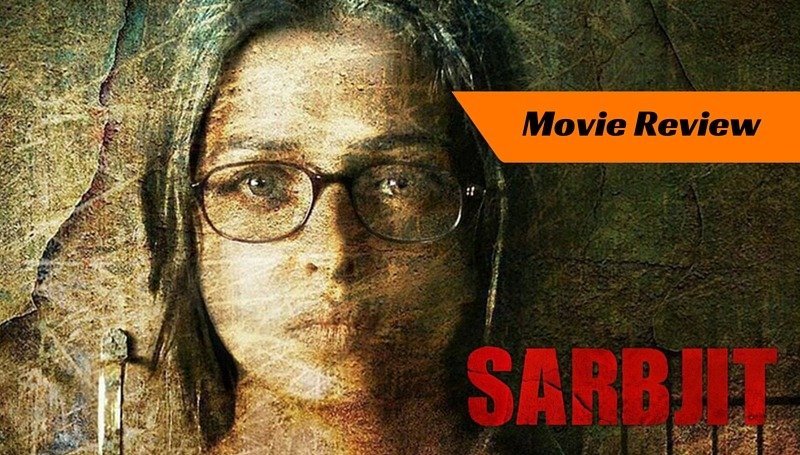 The biopic of Sarbjit was in the news since it was announced. The acclaimed director of Mary Kom and the names like Aishwarya Rai Bachchan, Randeep Hooda, and Richa Chaddha in the cast promised an entertaining time at the cinema hall. However, perhaps the movie raised the expectations too high to match up with the movie. Read the detailed Sarbjit Movie Review right under. And do remember, this is purely viewing the movie as a movie, and not speaking emotionally. So here we go.

Sarbjit is a biographical movie on the life of Sarbjit, an Indian farmer who was captured in Pakistan. The movie is directed by Omung Kumar and features Aishwarya Rai Bachchan, Randeep Hooda, Richa Chaddha and Darshan Kumar in primary roles.

Sarbjit(Randeep) is a normal average Indian farmer who lives with his wife Sukhpreet(Richa), father and sister Dalbir(Aishwarya). He goes missing and his family is busy in finding him. They discover that he had crossed the border and landed in Pakistan while drunk, and is captured by the Pakistani police under charges of spying and conspiring bomb blasts in Pakistan with the identity of Ranjit Singh. His family and Dalbir, in particular, turns every stone to get his brother out of there but finds it too hard. Meanwhile, multiple terror attacks happen on either side of the border, causing the rift between the two countries to deepen. Awais Sheikh(Darshan Kumar), a Pakistani lawyer meets Dalbir and offers his help. They taste minor successes and few false alarms of Sarbjit’s freedom and face a lot of protests from Pakistan and particularly the victims of the bomb blasts, which the officials say are caused by Ranjit(Sarbjit).

Watch the Trailer of The Movie Here.

The movie is undercooked in terms of writing. Barring a few scenes and dialogues, the rest of the movie feels rushed and raw. The story had a lot of promise and potential as the whole country knows about Sarabjit and it was easy to connect with them as all the incidents did not happen ages ago. However, the screenplay is too rash and often leaves the audience confused with the weird transitions. The event of Dalbir knowing that his brother is in Pakistan looks too ‘Daily Soapy‘. The scenes inside the jail with Sarbjit in the frame, look well written. The dialogues are ineffective at large.

While talking about the screenplay, we would like to mention a single specific scene mainly as an example. Awais Sheikh reaches his home to see the protesters burning his effigy in front of his house and burning his belongings. He joins them and sarcastically blames himself without revealing that he is the lawyer who is fighting for Sarbjit. While the scene was good to watch as a standalone, with the prerequisite knowledge of the movie premise. It did not contribute much to the narrative of the movie. His scooter being burnt by armed terrorists later in the movie nearly gave a better impact with the same context. This was not the only unwanted scene in the movie. Again, we still say it was a great scene, but not necessary in the movie.

Randeep Hooda is the gem of the movie. He constantly manages to amuse the audience with his performances in each movie. In this movie as well, he is every bit engaging and one can sense the pain in his eyes, his facial activities and his voice in particular. Richa Chaddha plays her part as an underdog who might not be noticed much but is one of the pivotal aspects of the movie. Her eyes act much for her. Darshan Kumar as the lawyer with humanity in him is pretty much the best part in the second half of the movie.

Finally, coming on to Aishwarya Rai Bachchan, who appears to drive the story single-handedly, we would just say that her performances ranged widely between moving and unbearable. At few places, she is that one face that would make you cry with her in a second. While at other points, she appears to be trying too hard and screaming, with un-natural body gestures and overdramatic dialogue delivery. We get the fact that she had to bring a certain aggression to the role. But the final product wasn’t all positive, to be honest.

Other characters in the movie are clearly forgettable. However, somehow Ankita Shrivastav who plays Poonam, will stay in your mind for a while after the movie ends.

While we praised the music album of the movie in our music review, and still stand by it, however, we also would mention that the use of songs for the narrative is not up to the mark. ‘Rabba’ is underused and possibly too soon for the movie. A song about almost losing hope in the first 15 minutes of the movie doesn’t work too well for us. ‘Salamat’ looked fine but almost took away the attention from the narrative. ‘Meherbaan’ was the one song that we loved to listen and watch in the movie. It was the only song well used. ‘Dard’ is picturised beautifully and we were right, it did have an impact in the movie, but it wasn’t all necessary for it. To our surprise and disappointment, other songs do not get any space in the movie.

However, a huge shoutout to the background music of the movie. The Sarbjit theme song by Shail-Pritesh is just too good. It is still playing in our mind.

Omung Kumar had impressed us in the past with Mary Kom, but this venture by him looks too shabby to be awesome. Possibly he tried to put too many elements in the movie and it did not work out well. While, the performances are good at large, some scenes look too overdramatic. The first half is emotionally connectable, but the second half loosens up. Also, the final montage did not have the desired impact. Overall, an acceptable but unsatisfying effort at direction.

Sarbjit is a movie with a lot of emotions and a lot of drama. The performances are good, but unbearable at times. The screenplay is rough and jarry. Music is underused to its potential. A few scenes you would want to watch repeatedly, but as a wholesome movie, it is just a single time watch. Watch it for Randeep Hooda and Richa Chaddha.