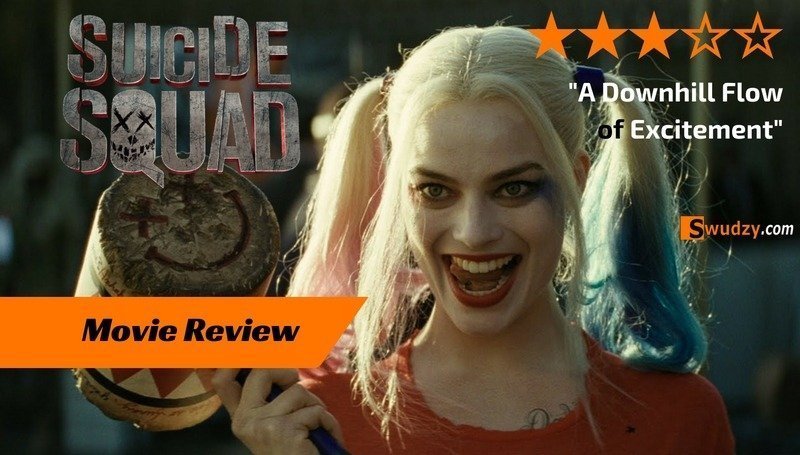 Well, let us just agree that Batman v Superman : Dawn of Justice was not as good as we expected it to be. And when the trailers for Justice League, Wonder Woman, and Suicide Squad dropped in the Comicon, we were excited as hell. But after watching this week’s release Suicide Squad, I will just say that it successfully attracted but failed to engage for the complete movie. Read the full Suicide Squad Movie Review below.

Suicide Squad is the 2016 release by Warner Bros. featuring storyline from the DC Comics Extended Universe. It is based on the comics titled the same and is directed by David Ayer. The movie features Will Smith, Margot Robbie, Jared Leto, Joel Kinnaman, Viola Davis, Jai Courtney, Jay Hernandez, Adewale Akinnuoye-Agbaje, Cara Delevingne and Karen Fukuhara in primary roles.

Superman is dead and after the events of Batman v Superman, the world has started to prepare itself to tackle metahumans whom they cannot trust. For this purpose, Amanda Waller, an official is building a plan for a team of villains. The team mainly consists of Harley Quinn, Deadshot, Captain Boomerang, Killer Croc, El Diablo and Katana. It is to be led by Rick Flag. Even before the plan gets approval, Enchantress, a witch who possesses Rick Flag’s girlfriend’s body, originally a part of the squad, rebels and starts developing a machine to wipe off humans with the help of his brother.

The rest of the team is assembled in haste and they all are injected by an explosive which is controlled by Waller and Flag. If any one of them betrays or tries to kill one another, that person is killed. The usually bad guys now have a mission on hand which they are reluctant to attempt but still, they have to.

The movie starts on a positive note with everything falling into right place. The characters are interesting, the plot pulls in, and the laughs flow in genuinely. The first hour of the movie runs pretty smooth with everything right, but it is the latter half of the movie, specifically the third act, where there is not much substance in the movie. This leads to our conclusion about the writing, that the story is not completely developed. The screenplay is flawed and does not completely involve the audience.

However, the characters are brilliantly developed. Especially Harley, Joker, and Floyd(Deadshot). The madness of Harley’s character is one of the major reason that the movie is watchable. Joker is used more as a subplot to the movie rather than one of the main characters. But he is intimidating nevertheless. Deadshot is the one with the most emotions in the movie, And we do not complain about that. Rest of the squad is pushed towards a supporting cast and the character of El Diablo, Captain Boomerang, Killer Croc and Katana do not have much weight. Rick Flag could have been a strong character but wasn’t.

The dialogues of this movie are hands down awesome. There is madness, there is humor, there is intensity, there is the ploy and there is a lot of entertainment in the dialogues. A mixed performance by the writing team it is.

Margot Robbie steals the movie with the crazy Harley Quinn. She is the best performance of the movie. No viewer can disagree with this statement of mine. Next follows Will Smith as Deadshot. He puts in complete emotion to the character and is a hell of a convincing performer as the shooter. Jared Leto has a brief role but he puts in his everything to the role. As we mentioned above, he looks menacing and intimidating. However, we wished more of Joker. Cara Delevingne as Enchantress fills the shoes of the villain for the villains to fight. She is acceptable and not much can complain about her.

Apart from the rest of the cast, only Viola Davis connects to the audience to some extent. Rest all fall flat in terms of performance.

A comic book movie and one at that big scale is bound to have awesome combats and this movie is no exception. And the effects have some brilliant moments as well. As opposed to Batman v Superman, this movie does not have shaky camera movements in action scenes. And it is a welcomed change. However, some scenes had VFX which was hard to believe to be true.

David Ayer has created  a piece of entertainment but oversold it. He started out great with the brilliant setup, but the payoff was disappointing. However, he must be credited for extracting some of the awesome performances from the lead actors, and selecting such awesome songs for the soundtrack. But the grip and the control over the movie seemed to loosen up towards the second half of the movie. Overall a decent effort.

Suicide Squad is a brilliant entertainer in the first half and an average action movie in the second half. There are some awesome performances by Margot Robbie, Will Smith, and Jared Leto. Everyone is bound to love Harley Quinn. But the fans might get disappointed with the overall movie as a whole. We would say it is an optional watch and watching Budhia Singh : Born To Run would be a better decision.