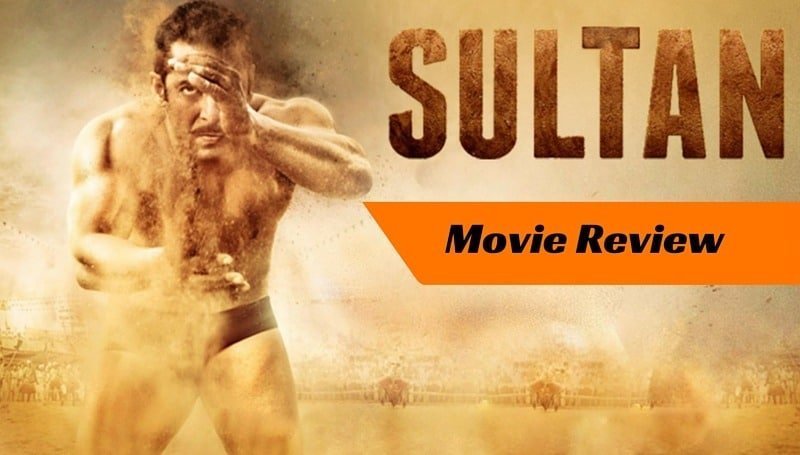 Since the producers of Sultan dropped the trailer of the movie, the Salman Khan fans were just too hard to tame. There has been quite a buzz about the movie and the training regime that Salman had to follow for it. The music of the movie has also been quite welcomed by the fans. However, the movie did not live up much to all the expectations that we had from it. Anyhow, Salman manages to appease his fans with a fine and rare performance. Read the full Sultan Movie Review below.

Sultan is a 2016 romantic action drama movie written and directed by Ali Abbas Zafar and produced by Aditya Chopra(Yash Raj Films). The movie features Salman Khan as the title character. Other actors include Anushka Sharma, Randeep Hooda, Amit Sadh, Anant Sharma and Parikshit Sahni. The music Sultan is provided by Vishal and Shekhar.

Akash(Amit) is a rich young businessman who is running an unsuccessful wrestling league Pro Takedown. His father suggests him to bring in an Indian wrestler, Sultan(Salman) to attract audience. But upon listening to Akash’s proposal, Sultan declines it. Akash comes to know through Sultan’s friend Govind(Anant) about his such behaviour.

In an extended flashback, we come to know that eight years ago, Sultan ran a cable business with Govind. He saw a wrestler, Aarfa(Anushka) and fell in love with her. But she insulted him for being inambitious. He then decided to become a wrestler and win back self respect. Aarfa is convinced by his efforts and they get married. They both won various honours and even got selected for olympics. However, soon they came to know that Aarfa is pregnant and hence she pulled back from wrestling. Meanwhile, Sultan developed arrogance in himself and this doesn’t go well with Aarfa. They lose their child, and Sultan’s arrogance and unavailability is considered to be the cause for it.

Back to present, Akash modifies his offer to suit the backstory of Sultan, and Sultan agrees as the money will help him build a blood bank. Since he has been out of shape for some years, Akash ropes a former underground wrestler(Randeep) to train Sultan so that he can fight against his own guilt and win back his self belief, self respect, and family.

The story of the movie has not much new on its tray. At some places, it almost closely dodges from being a cliche. The screenplay is interesting and has required pace. However, the long flash back almost drifts the movie away from the presnt storyline. This also results in the second half being greatly uninteresting and rarely appealing. The second half comprises mainly of Sultan’s training and his fights in the tournament. And while the former is entertaining, the latter doesn’t impress much.

The dialogues of the movie are corny, and stereotypical dehati. And the same goes for the characters as well. Speaking of the characters, only Sultan’s character gets some depth. Closely followed by Akash and the coach played by Randeep. Rest all, including Aarfa are more or less flat characters. Aarfa, who is initially portrayed as this strong and confident athlete who has her own terms of living, is impressed/convinced too soon by Sultan’s dedication to wrestling.

Even Sultan’s character seems to go out of the line at many places. For instance, agreeing too quickly to join back the ring, or the un-Sultanic reaction to the news of his son being dead.

It is a rare statement, but Salman Khan impresses with his performance as Sultan. And though he always has his charm, he definitely showcases his acting abilities with this role. However, the accent that he grabs is far from being a convincing Haryanvi accent. Possibly, the co-star Randeep could have given some tips to him. A particular scene where Sultan repents his grown belly is a marvel coming from Salman Khan.

Anushka Sharma‘s role is restricted to just another element in the story and has far less importance. She tries to give her best, but the role does not give much impact.

Randeep seems to do a sleepwalk and he does that with complete efficiency. Amit Sadh is refreshing and convincing as the rich, and unsuccessful businessman. However, the real highlight of the movie for us was Anant Sharma as Sultan’s friend Govind. He was a real screen magnet. We couldn’t resist notice him.

The music is good, but not extremely awesome. Songs like Baby Ko Base Pasand Hai and 440 Volt are catchy but lack quality. And while 440 Volt is understandable, Baby… looked completely a forced song and could have been avoided. Jagg Ghumeya and Bulleya are good to listen. Especially the way Anushka is introduced while Bulleya is played is just WoW!!

Tuk Tuk does great job at setting up Haryana as a setting. But the real star of the music is the Title Track and Sultan’s theme. It just pumps up the movie. Also, the sound design and arrangement complement the movie to the core.

Not greatly convincing. Ali Abbas Zafar has directed better movies before Sultan. This movie had a potential and above it, it had big star names associated. This could have been a trump card for Ali, but he misses out hugely. Sultan is far less engaging than his previous outing. Possibly, the Salman factor overpowered the movie. The movie has some moments that are awesome. The initial Dargah scene and Salman’s struggle with his shirt after the belly scene are two of them. However, those moments are not enough to make the movie memorable.

The movie is good to be watched once and for the experience, not the movie. The sound of the movie is best enjoyable in a theatre. Especially, Salman fans will have a great time. The movie can also be watched for good performanes by Amit Sadh, Randeep and Anant Sharma. However, beware of the slower and less convincing second half. Have a good time.