Top 7 Qtiyapa by TVF That You Must Watch 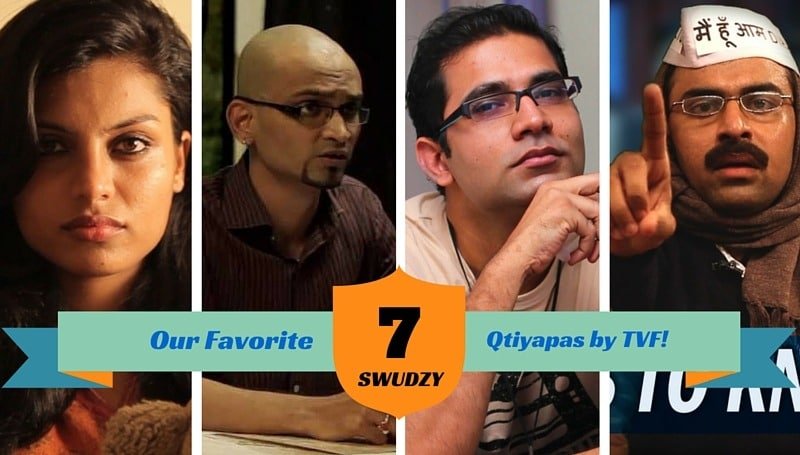 The Viral Fever is probably the biggest content creator(fiction sketches/movies/web series) on YouTube India. And the most common works, that they are known for are TVF Pitchers and TVF Permanent Roommates. But not many people know that these web-series were not the reason for their popularity. The real key to their success were the random funny sketches, that they made, which were marketed by them as Qtiyapa.

While the word Qtiyapa in itself has no meaning, Team TVF says it is a mix of Cuteness and Chutiyapa(stupidity). And we can say, each of these videos met with this definition of the word. Be it the ‘Inglorious Seniors’ or the Tinder Qtiyapa (The latest one in the series), each of them has been an instant connect with their viewers.

Here we take a look at 7 of the best Qtiyapa videos by TVF. And believe us. It was hard, really hard, for us to select just 7 from the awesome lot. So here is our pick. Have a look.

In February 2012, TVF took a dig at the popular adventure-reality(that’s what they call it) show, Roadies. With Naveen Kasturia as Ranvijay (who was stunned quite often) and Deepak Kumar Misra as fairly un-nourished Raghu/Rajiv, the video was a massive hit. Especially the moment with Raghu slowly going down the table and emerging from the other end of the table as Rajiv. This was in fact, replicated in the original show as well by the  brothers. Watch it here.

What happens when a director famous for his dark movies decide to collaborate with a team that makes light-hearted, family friendly, funny sketches. This 2013 video featured Anurag Kashyap, who wanted to make a 100 Crore movie and sought help from Arunabh and Biswapati for the same. They come out with ideas for movies like “Khach Khach Hota Hai” and “Lingham”. Anurag takes the video sportingly and makes jokes on himself. Watch it here

This is THE Most Watched TVF Video on YouTube. Here, Team Viral Fever decided to take a dig at the Newsroom drama that happens in the prime-time slot. Comparing the political debate with the movie industry, the video featured characters like Arjun Kejriwal, Another Chopra, and Meenakshi Lekhika with the only real character being Mayank Shekhar, who actually could not manage to speak more than 1 sentence in the video. Watch this piece of gem, and join the other over 5 million people who watched it repeatedly.

This horror-comedy video came around Rakshabandhan in 2013. This was an instant hit as it connected to the many ‘Friendzoned’ lovers across the nation. This video also marked the beginning of a fan favorite pairing of Jeetendra Kumar with Akanksha who have re-appeared together in subsequent videos like Permanent Roommates (S01E04), Pitchers, Tech Conversations, etc. Have a look at this video right here.

Probably the funniest video by TVF without over the top jokes. Just taking a single joke concept in mind, the team created a highly engaging and entertaining video. The video runs for just under 4 minutes and packages huge amount of laughter in it. This also turns out to be a highly underrated video. Watch this video right now.

Released in May 2014, this is probably the most underrated video by TVF. A lady is interviewed by God (played by Jeetu) who wants to be a Mom, but God tries to change this decision of hers. While this video is not the funniest of them all, it has a cuteness level that surpasses all of TVF’s other videos. Also, there is a whiteboard that contains all To-Do’s of God. And there is a Yam-Tweet. What am I speaking, you watch this video right here.

We would also like to mention a few videos which we could not include in the list of 7 above. These videos were as Qtiyatic, but not enough to land on the list.

So what do you think about our picks of the Best TVF Qtiyapas? Did you think we should have included some other videos in our list? Do tell us in the comments section.