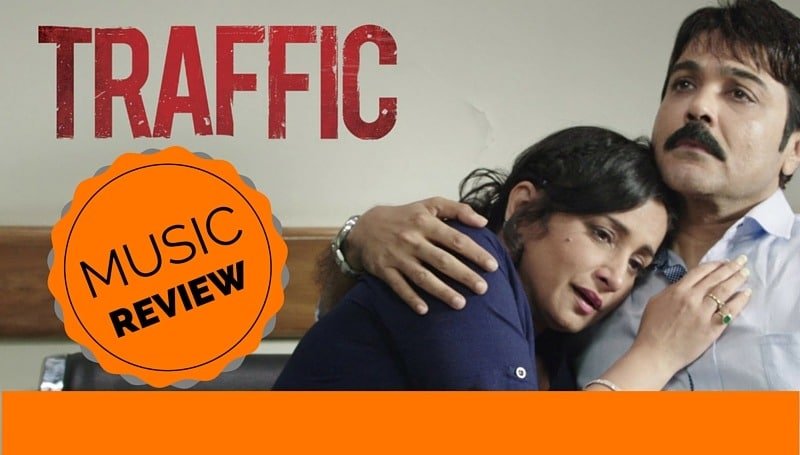 The third Hindi movie that will release this week is Manoj Bajpayee, Jimmy Sheirgill and Divya Dutta starrer ‘Traffic‘. The movie is based on a Malayalam movie of the same movie directed by the same director. The trailer of this movie got amazing praises and we ourselves gave it a good rating. But the music of the movie is a completely different aspect and here we are with the full Traffic Music Review for all you Swudzians.

Okay. The music of this song is awesome. Heart touching. Also, the lyrics of this song are superb, carrying a lot of meaning into them. However, speaking personally, this song did not appeal to us. Probably the lyrics and the music did not complement each other. Benny Dayal and Palak Muchhal lend their beautiful voices to this track. The lyrics are penned by A.M. Turaz and the music is by Mithoon. We might not have this track in our playlist.

This song is written and composed by Mithoon and is sung by Arijit Singh with Mithoon. The music of the movie again touches the soul, but the lyrics seem to fall out of rhythm. Overall, this song swings between Okay and Very good. Still, not enough to secure a place in our playlist.

This one is probably the best track on the album. Palak Muchhal shines out bright in this soft and soothing song. Mithoon shows why he is the ‘go-to‘ musician for the music of a certain genre. The pace of the song, along with the percussions, and the flute, all match up just perfectly. It really sets the mood of the song and makes you feel it. Mithoon has produced a marvel here. Kudos! A definite spot in our playlist.

This appears to be a  background song for the high moment of the movie occurring somewhere in the third act of the movie. It is full of energy and pump. This song is of that kind that beautifies the narrative, even though having no importance on their own. The music by Shailendra Barve is nothing extraordinary but the production is awesome. The lyrics by Jitendra Joshi are also decent but acceptable. Vocals fail to impress.

Sayeed Quadri pens down lyrics for this Mithoon production. This song is another soothing track from the album. It touches the heart, and the vocals are beautiful by Aakanksha Sharma and Mithoon. However, despite the amazing music and lyrics, the song falls short of being outstanding. Regardless, it secures a spot in our playlist.

Listen to the soundtracks yourselves here.

While the music does not make an extraordinary mark according to us, we do strongly feel it will be sufficient to give the right momentum to the narrative of the story. Let’s watch the movie for the same.