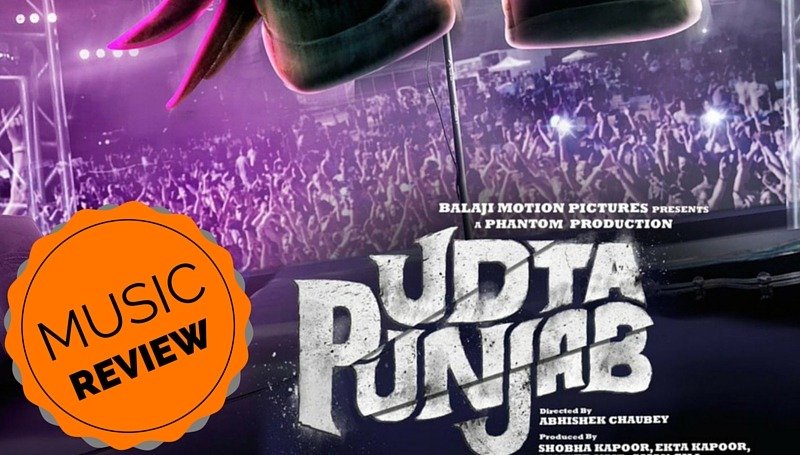 Udta Punjab is in the news for various reasons these days, be it the controversy around certification, CBFC asking the makers to remove multiple scenes and words from the movie, or the recently leaked censor copy of the film. Regardless, we are excited about the movie releasing tomorrow and expect the movie to be worth the troubles that the makers took. The music of the movie had already been released and some songs are quite popular. Here we are with our personal views on the music with Udta Punjab Music Review. Continue reading below.

Sounding like an establishing song for Tommy’s character and the movie as a whole, Chitta Ve is catchy with the rap but the song is not one that we can find people singing or humming often. The rap, as we mentioned, is definitely awesome and much better than few of the raps found in the Indian pop industry. We might keep this song in our playlist, but we expect the use of the song in the movie to be extremely brilliant.

For a change, Kanika Kapoor is singing a song which is not an item song. This song has a pretty precise feel to it that represents the fear of the characters of an uncertain tomorrow with darkness around them due to their decision. This contemplation is definitely a repeatable song and we already have it in the playlist. A special mention to Shailee for the catchy and novel lyrics pattern.

This metaphor by Late Shri Shiv Kumar Batalvi we all can fall in love with. Talking about a girl named love, this song beautifully describes the death of innocence of character/characters in the context. A gloomy and sad feel to the track definitely engulfs you into itself. Both the normal and the unplugged versions are equally awesome, but we loved the unplugged version with Diljit Dosanjh more. But that doesn’t take away anything away from Shahid Mallya‘s version. It is great as well. Both the versions are already in our playlists.

It is so delightful to listen to Vishal Dadlani and Amit Trivedi singing together in a single song. A fun feel to this song also has a slightly darker shade in the lyrics. Vishal Dadlani is awesome in the rap sections, but we loved Amit Trivedi’s vocals better in this particular piece. Varun Grover is just brilliant with the pen here. A great song to dance to and sing repeatedly. A definite party hit and rap lovers are going to love it. Already in our playlist.

What perhaps sounds like a shade of small moment of happiness is a nice song to hear. But we expect this song will be forgotten quickly. This might be one of those songs that catalyse the narrative in the movie. We will skip this song from the playlist, however.

You will slowly start enjoying the song exactly how the concerned character will feel about the drugs that he/she is perhaps taking for the first time. A trance similar to that in Chitta Ve is used in this song and the song makes it pretty clear that it is talking about a character who is getting trapped into a drug problem, and with the words like Gabru used, it appears we are talking about Tommy Singh again. Not extraordinarily awesome, but enjoyable. We will skip this song from the playlist.

Listen to the songs right here.

The music of this album by Amit Trivedi is particularly stitched for the movie and it is apparent with the genre and feel that the album gives as a whole. While songs like Hass Nach Le and Vadiya might be overlooked,  some songs of the movie will be definitely a hit with the listeners.