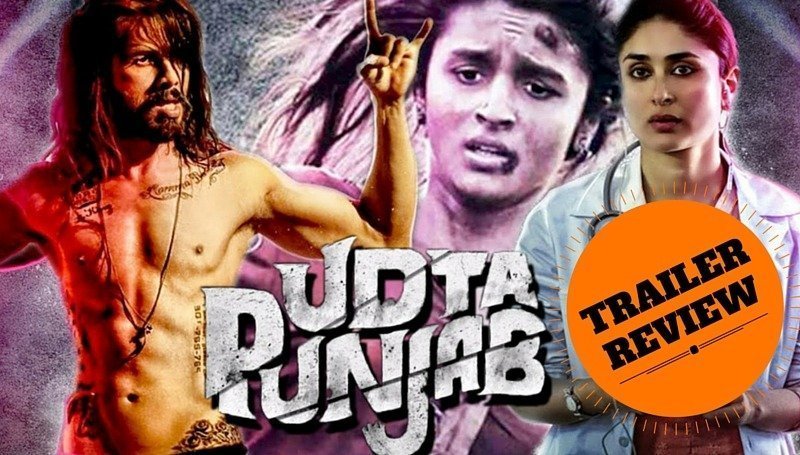 Before we could get over with the feel of Sarbjit Trailer. Phantom Films and Balaji motion Pictures gave us another trailer to drool upon. The trailer of Udta Punjab released yesterday and it is nothing less than AWESOME. Read the full Udta Punjab Trailer Review below.

Udta Punjab is a 2016 Crime-Drama produced by Balaji Motion Pictures and Phantom. The movie is directed by Ishqiya fame Abhishek Chaubey and stars a star cast with names like Shahid Kapoor, Alia Bhatt, Kareena Kapoor Khan, and Diljit Dosanjh. The movie will be released on 17th June 2016.

From what appears in the trailer, the movie will revolve around lives of 4 youth in Punjab, who have the state, as well as the issue of Drug addiction in common in one form or other. While Shahid and Alia’s characters appear to be addicted to drugs, Kareena appears to be a doctor who is taking measures to find roots of this problem in Punjab. And we guess Diljit is a police officer who initially ignores the issue for his own monetary benefits but later joins Kareena in her motive.

The trailer is definitely Hard Hitting. The powerful characterisation of all the cast members is evident in the trailer. And the tease of performance by the actors is stellar. Shahid, in particular, stands out from the trailer with some amazing clips in the trailer. But having said that, we cannot take away anything from other cast members as they are equally awesome. Specially Alia who looks just awesome in her role(the tease of course).

In addition to the performance, the music in the trailer hints at the amazing soundtrack that is about to be released. Amit Trivedi! You are awesome.

Favorite Moment from the trailer

While we loved the trailer, we especially enjoyed some moments in the trailer. This laugh being the best among the lot.

We enjoyed the trailer a lot and expect the movie to be super awesome.

PrevPrevious PostSARBJIT Trailer Review: A moving tale on its way
Next PostShort of The Week : ‘Khushiyon Ka Vyapari’ by Heena DsouzaNext