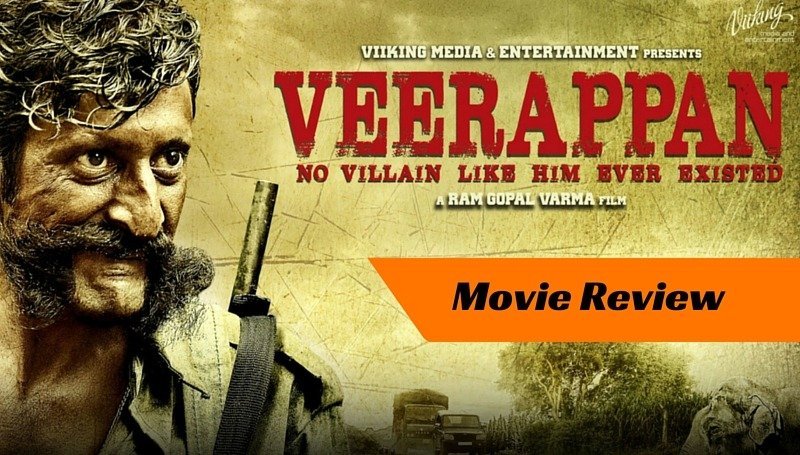 Whenever Ram Gopal Varma makes a movie, we are afraid he will make few more Aag‘s and Satya 2‘s. But at the same time, we also wish this one brings him back to the director we loved for movies like Kaun?, Satya, Rangeela and many more movies like those. No matter how down he falls, true RGV fans will expect wonders like The Attacks of 26/11 from him once in a while. We are one of those fans and expected Veerappan to be a comeback movie for Ram Gopal Varma. But unfortunately, he proved us wrong. Veerappan is nothing more than an ill-dramatized storytelling with poorly acted performances. Read the full Veerappan Movie Review right under.

VEERAPPAN : No Villain Like Him Ever Existed is a 2016 crime thriller movie produced by Viking Media and Entertainment and directed by Ram Gopal Varma. The movie features Sachin Joshi, Sandeep Bharadwaj, Lisa Ray and Usha Jadhav in primary roles.

Veerappan(Sandeep) is a dreaded criminal in the jungles who has killed multiple civilians and policeman including an officer whose limbs have been chopped off and head smashed with rock by Veerappan. Another STF cop(Sachin) teams up with Priya(Lisa Ray) who is the wife of that officer, to bring Veerappan out of the jungles and kill him. Muthulakshmi(Usha), Veerappan’s wife is looking for a home in city and Priya gives her shelter as a PG in order to win her trust and get Veerappan out of the jungle. This plan of theirs fail and then the cop decides to team up with another cop whom he got suspended earlier. The suspended cop joins an arms dealer to supply ammunitions to Veerappan, winning his trust, and luring him by saying he can arrange a meeting with Prabhakaran, LTTE chief , who, Veerappan is a big fan of. SPOILER ALERT! Veerappan gets killed.

This movie is a huge disappointment in terms of performances. Apart from Usha Jadhav, no other actor manages to convince with their performances. Sandeep is not utilised well enough, he shows potential but quite awkwardly, the movie did not have much for the title character. Sachin Joshi is hard to tolerate. He is mostly blank in terms of expressions and inadvertently funny when in disguises. Lisa Ray manages to punch in all the acting abilities that she believes she has into just a single movie. If the last statement is hard to comprehend, we are saying that she overacted. A Lot.

The story was fine. No complaints against that as most of it was based on real events. However, the screenplay was the part where RGV fails. Not at all engaging screenplay felt hard to bear. The dialogues are meaningless in attempt to be metaphorical. Dialogues like ‘Sabse bade rakshas ko maarne ke liye us se bhi bada rakshas banna padta hai‘ make it hard to not laugh at them. The boring writing forces you to sleep. but…

The music won’t let you sleep. So much we tried to save our energies for the next movie. We couldn’t. The tracks that were used in the movie were ‘Mucchi Re‘ and ‘Veer Veer Veerappan‘ which are unbearable. Still, if asked to choose between the two, we would choose Mucchi Re for the fine lyrics by Manoj Muntashir. The background music is so torturing, that mid way in the movie, we wanted Brick Tamland to come to our rescue and yell

Ram Gopal Varma tries to recreate the critical success of his own movie on the same subject ‘Killing Veerappan‘ but misses largely. No traces of the director we love were visible apart from the unconventional camera placements and low angle shots. The movie has few bits of great camerawork but rest of the movie is too difficult to watch, let alone recommend.

This movie is best left in the jungle. Keep the wallet back in your purse and back away. You wouldn’t want to pick the gun yourself and kill everyone in the cinema hall during the movie.