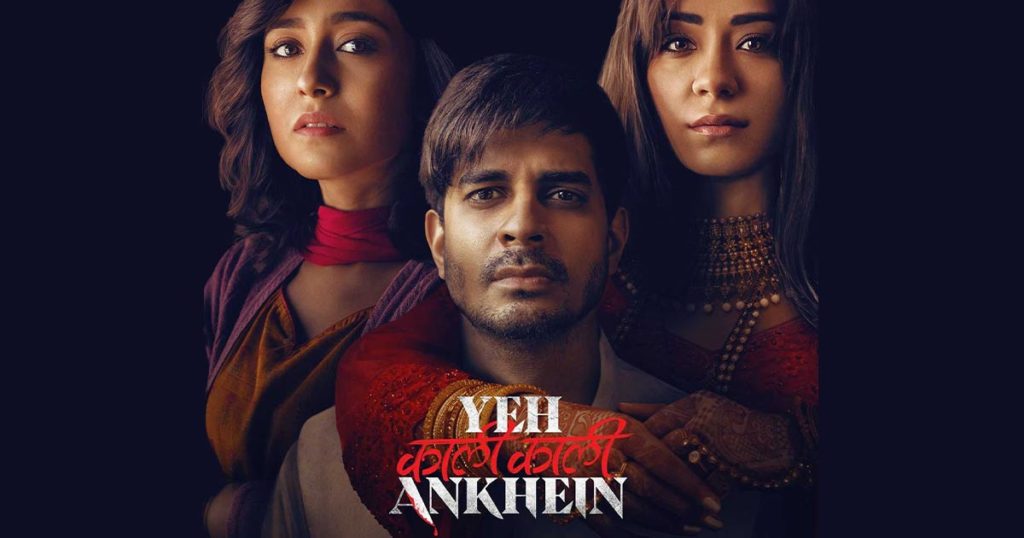 God forbids if you come across a tough choice of choosing either the safety and wellbeing or to be intense, the survival of your family; or be selfish in thinking about your own happiness. What would you choose? In normal movie scenarios like this, the protagonists choose the family and then sob away in sadness making the movie a tragedy. But Yeh Kaali Kaali Ankhein, while choosing the same, puts equal emphasis on the protagonist’s need for happiness, and his quest for the same, while trying to make sure the family is safe.

Vikrant is a middle-class boy son of an accountant, who is troubled since childhood by the presence of the daughter of his father’s employer, a.k.a Purva. Like a bad omen, whenever Purva is around, bad things happen to Vikrant. And after Purva asks if he would like to be friends, and Vikrant denies, and Purva leaves the town for some reason, his life becomes peaceful. And upon getting into college he meets Shikha and falls in love with her. Meanwhile, his college is over, and he is waiting for a job offer from Bhilai, but his father forces him to go and talk to his own employer, the MLA, Akheraj. But on his way to Akheraj’s office, he encounters Purva, who with her ever mysterious smile, is back in town. Nevertheless, he meets Akheraj, and even after denying the job, citing the awaited Bhilai offer, he ends up with a Job managing Purva’s Zumba class, with thrice the pay. This marks the beginning of the spiralling swamp, where Vikrant, his family, friends, and his love Shikha, get into because Purva desires Vikrant, and she, along with her father and brother, will do ANYTHING, to get a hold on Vikrant. The story explores fear, darkness, and everything that you might not expect it to explore when the series start.

The Story starts simple and builds up in a fantastic flare, with realistic dialogues from Varun Badola. The series by Siddharth Sengupta holds its grip on the viewer’s eyeballs from the beginning and hardly lets go. I found myself glued to the monitor, being compelled to watch the next episode because of a brilliant setup and cliffhanger right before the end of the previous episode. The soundtrack hits the right notes, emphasising the intensity of the scene, with perfection. The prime example is the song Teri Baari in the pilot of the series. With the exception of the choreography in the song ‘Humra Sajaniya‘, the songs leave no room for complaint. The Title track is a definite groove, Disha Patni vouches for it.

In addition to the writing team, the acting department deserves equal credit for the brilliance of the show. Tahir Raj Bhasin, as Vikrant, shows his trapped emotions to the T, and even makes his character’s poor choices seem acceptable. Like, what else can a character do? Shweta Tripathi Sharma, as Shikha is natural as ever. She essays the character with ease, and shall I say perfection. Anchal Singh, as the Dangerous Diva Purva, is a delight to watch. Especially in episodes 4 to 8. She is the driving force of the series, eventually being responsible for almost every character’s decisions. Saurabh Shukla acts as a sturdy and reliable pillar to the lead trio, along with noteworthy support from Surya Sharma and Brijendra Kala. Anand Joshi as Golden, Vikrant’s loyal friend, is a treat to watch. He is one of my favourite parts of the series. Arunoday Singh, who had collaborated with Siddharth for Apharan, enters for just a couple of episodes and makes a killer mark. And sets up his character for a much bigger role in coming episodes.

A Thrilling RideYeh Kaali Kaali Ankhein is a thrill from the start to the end and is definitely a recommendation for a watch from my side. It is available on Netflix India. Do watch it, and do let me know your opinions on this show. You can drop down a comment here, or DM me on Instagram, Twitter or Facebook @NiketSays.

Keep Watching This space for more MeViews like this.