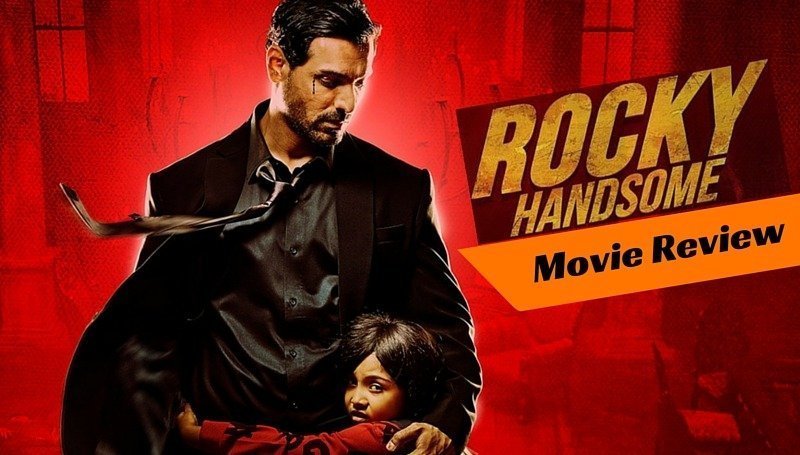 With movies like Force and Drishyam coming out of Nishikant Kamat‘s bucket in the recent past, it was expected that his latest release ‘Rocky Handsome‘ will be as brilliant as the previous two movies. Did the movie live up to fans’ expectations? Does it have enough power to take down on Batman vs Superman: Dawn of Justice ? Read full Rocky Handsome Review here.

Rocky Handsome is an action thriller drama movie, directed by Nishikant Kamat and adapted from the South Korean movie ‘The Man from Nowhere‘(2010). It stars John Abraham in the title role along with Diya Chalwad, Nishikant Kamat, and Sharad Kelkar. It also features Shruti Haasan, Nathalia Kaur, and Nora Fatehi in cameos/extended cameos.

The story revolves around a mysterious man, Kabir Ahlawat(John), also referred as Handsome. He operates a pawn shop in Goa and has a weird-sweet equation with a little girl Naomi(Diya), who reminds him of his dead wife(Shruti). Naomi’s mother Anna(Nathalia) is a dancer at a club/bar who gets involved in a drug and organ trafficking mafia tussle. The main goons of the movie, Pereira Brothers torture her and kidnap her along with Naomi. This is where Kabir and Pereira’s cross paths and he sets to rescue Naomi and her mother.  Meanwhile, a narcotics cop(Sharad Kelkar) is busy in finding evidence against Pereira’s and their allies to stop the drug and organ trafficking racket.

Few glimpses of good acting and no other words can be said about the performances. John as Kabir is largely ineffective, except a few scenes with just him in the frame, and a few combat scenes. Sharad looks decent and effortless, reprising a similar role that he plays on TV(we are referring to Agent Raghav here). Nishikant impresses in bits, and the man who plays his brother in the movie crosses the fine line between acting and over acting several times in the movie, but we liked that. Diya looks cute but doesn’t manage to impress with his acting. Wrong casting, maybe.

Music is the second best part of the movie (keep reading to for the first). Songs have been strategically placed and are impactful. Our favorite tracks from the movie were Rehnuma and Aye Khuda. Also, there is a happier rendition of Aye Khuda in the movie that isn’t available on the album.

Unexpectedly, this is where the movie lets loose. With an emotionally effective story and plotline like this, a marvel could have been created. But the result was a decent script. Apart from a few moments, the screenplay falls flat. The first half is slow and almost boring, however, the script picks pace towards the second half.

Editing is a director’s best friend. And we must say, it is a loyal friend in case of Nishikant. All the action scenes are beautifully edited and the scenes involving flashbacks and painful trance, are the highlight of editing. However, rest of the places, editing is quite decent.

As we mentioned, we had huge expectations from this movie, but the director fails to live up to them. Possibly, the divided attention due to acting in his own movie made him concentrate lesser on the direction. But the final product left the viewers unsatisfied.

This is the best part of the movie. The fights, the jumps, the chases, each and every part of the action is beautifully choreographed. The best part, however, is the knife combat towards the third quarter of the movie. Each of the viewers was silently following the movements of the lone-shark Kabir in the combat.

While the action and the music are worth giving a shot, there is nothing much in the movie for the viewers. Can be avoided if you are not a huge fan of action movies. Wait for the Television telecasts instead.

PrevPrevious PostShort of The Week: ‘Haircut’ by Anand Tiwari & Sumeet Vyas
Next PostBATMAN vs SUPERMAN: DAWN OF JUSTICE Review: An Epic BattleNext