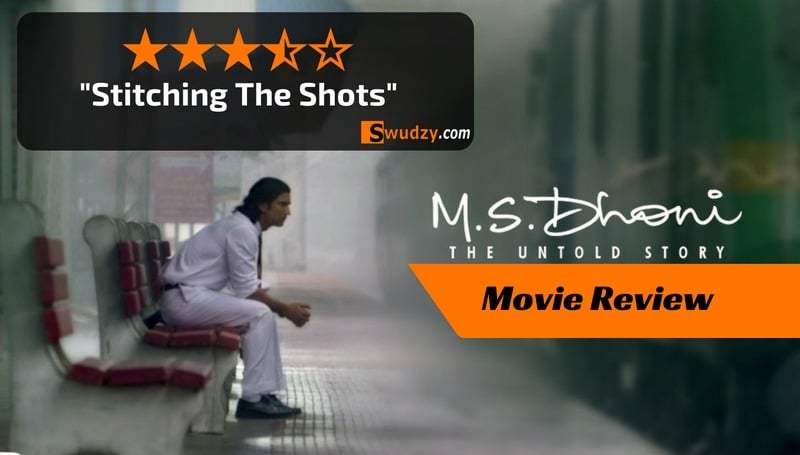 The Wankhede stadium is jam-packed, the energy levels are soaring high, and the crowd is chanting ‘India, India!!‘ A man in the  Indian dressing room is watching every shot closely on the television. He gets up and informs the coach that he is going up the batting order. And this is the moment when the crowd erupts. The chants of ‘Dhoni, Dhoni‘ almost mute out the movie audio when the famous Jersey No. 7 appears walking down the pitch. This opening shot of Neeraj Pandey’s M.S. Dhoni – The Untold Story is a delight. It surely promises a lot to the audience, and only partially fulfill those promises.

First thing first, the movie makes it absolutely clear that the events and characters are inspired by the true incidents and characters, but it is not a documentary and hence, a pinch of dramatization is served in the dish of biography. Regardless, a good chunk of the movie still feels like a documentary, with Sushant Singh Rajpoot‘s face morphed over real images of match winning moments and legendary shots played by the Indian ODI and T20 skipper.

The whole movie feels like series of random or sparsely related events and incidents from Dhoni’s life. Some of those events made sense, while others did not. A lot of characters were introduced and then left midway.  Same was the case with few storylines, like the love life of Santosh, who taught Dhoni the famous Helicopter shot, or ‘thappad‘ shot, as they called it. But that is understandable, as the movie was supposed to center M.S. Dhoni and others were just pieces of the story.

I am sorry, did I say story? Calling it a story would be a misstatement. It is more of a journey. A journey that you like to watch. Yeah, it has some elements of what a story can be, like a central character, a direction, etc. But something about the movie made it feel like a news show playing out events from Dhoni’s life for his birthday special. Moreover, the complete untold story was given away before the release by some way or the other.

Neeraj Pandey, who is known to have directed some of the awesome dramas, like A Wednesday, Special 26, etc.; failed to engage with the script. But it was Sushant Singh Rajput’s mesmerizing portrayal of MSD that won the eyeballs. This is where Neeraj was spot on. The casting and the pre-shoot effort by Sushant makes up much of the awesome experience that audience might have.  And, to make it clear, there is NO Fawad Khan, or Gautam Gulati, or Ram Charan Teja, as the speculations suggested, the real footages of actual cricketers is used, except for Herry Tangri‘s brief stint as the young Yuvraj Singh. Also, pretty much every character other than Dhoni is a supporting character in the movie, including the two love interests, Kiara Advani and Disha Patani, who have around 20 minutes of screentime distributed among them, and that includes three songs in them.

Speaking about the music, there are 5 songs in the movie, including three romantic tracks, which are beautiful. All three of them will have a constant competition to be your favorite. But the rest of the two tracks, including the ‘Padhoge Likhoge’ track, and the anthem styled ‘Parwah Nahin‘ failed to make a mark. The Overall impact of the music by Amaal Malik is really good.

The movie is a good experience to have, but not flawless as a movie. A lot of aspects look ignored in the movie as well as the story. Unfinished plots and randomly popping characters were a big awkward phase, but the depiction of cricket in this movie is perhaps the best in any Hindi movie so far. I say, watch it. But do not expect a dramatic story. Watch for the experience.