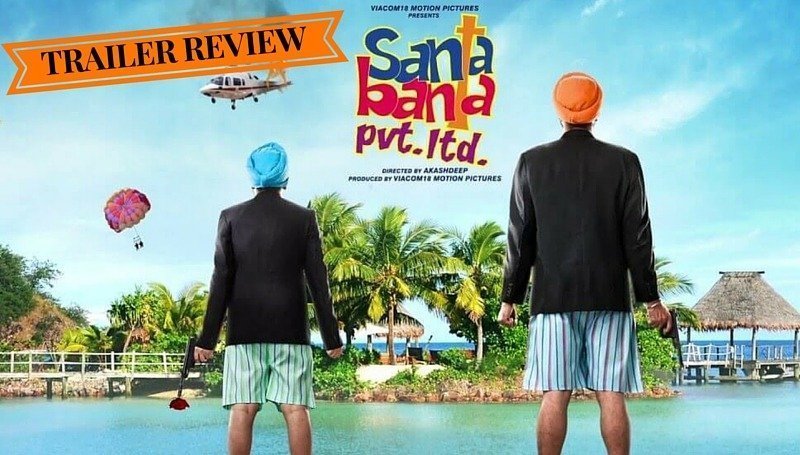 When Boman Irani’s natural screen presence combines with Vir Das’s wit and humour, it is expected that, at least, if nothing much, the viewers will be entertained. Except, this trailer doesn’t seem to provide the same. Rather, it looks like it is going to spoil the iconic characters of Santa Banta, for the coming few years.

Before moving forward, we want to make it clear, that the review is not at all biased towards the communities planning to boycott the movie, or the movie makers themselves. We are purely reviewing the trailer keeping in mind the entertainment value it has to offer, and other such factors only.

Santa Banta Pvt. Ltd. is the upcoming movie(notice that we won’t say it a comedy movie because it does not look like one) starring Boman Irani and Vir Das as Santa and Banta respectively, along with names like Vijay Raaz, Ram Kapoor, Johny Lever, etc. The movie is produced by Viacom18 Motion Pictures and directed by Akashdeep Sabir. The movie is set to release on 22nd April 2016.

From what appears in the trailer, the film is about 2 friends Santa and Banta, who are utterly stupid (just like the iconic characters by Khushwant Singh). They exhibit their stupidity in various unfunny gags. Things are supposed to get interesting when they land up in midsts of a kidnapping investigation.

While understanding the sentiments of the Sikh community behind their protests against characterisations of Santa and Banta, we would again like to mention, that we love the characters and do not see them as stereotyping any community. They are individual characters to us.

But speaking about the movie trailer, we would love to recommend to not watch the movie unless they see some extraordinary review from reputed sites like ours(oh yes dear, you can trust us on this). The trailer has nothing much to offer. Most of the gags, like the one mentioning to share a Rs.1000 note in 50-50, are as old as the characters. The humour seems forced and fails to make anyone laugh.

Both the characters in funky pyjamas, striped underwear, similar coats, colourful turban with matching ties, are as ineffective as a cactus trying to substitute a rose on Valentine’s Day. Two female characters are kept just to keep the glamour quotient in the movie, and provide each primary character with a love interest. The supporting cast sounds impressive, but we are afraid, they might not have a good script to play upon.

And while writing this review, we feel that saying anything more will be giving more importance to a trailer that is a joke on the word trailer.

None. To be precise, we did not find any moment worth keeping in this slot. Still, for the sake of filling in the section, we can say that the timespan where Vijay Raaz is visible in the frame, we feel like he can save the movie to some extent. Apart from that, nothing else.

You feel like we are being a tad too harsh on the trailer? Watch it yourself and let us know.

What were your favorite moments from the trailer(if any)? Did you like it(we hope not)? Do you agree with our review? Head down to the comments section and let us know.