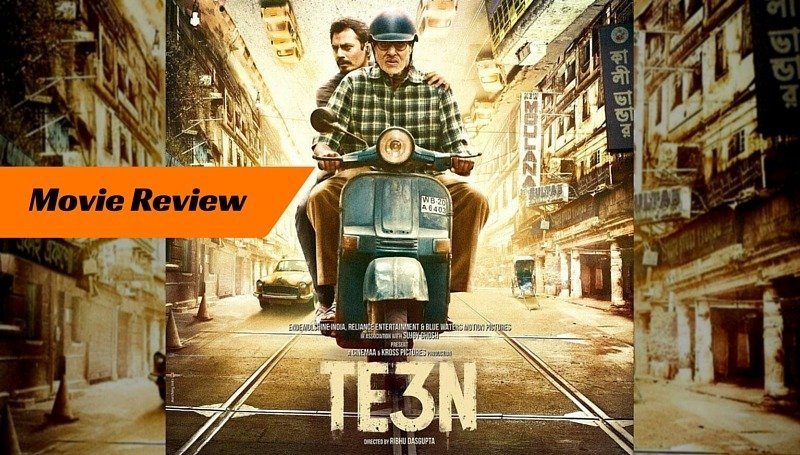 When names like Vidya Balan, Amitabh Bachchan and Nawazuddin Siddiqui are associated with a suspense thriller movie, you are bound to get excited about it. And to top it out, the theme of child kidnap and murder associated with it was a big yes for us and we rushed to get the tickets for the movie. We did get some treats from the movie but at the end, it was a bowl of Dal with salt not stirred well enough. Here, read the full TE3N Movie Review.

Before we go on with the review, a quick update, last week, we released JUMP, the very first short movie by Swudzy on our YouTube Handle. The movie can be watched on this link, or right under in the embedded player.

Coming back to the review,

TE3N is a suspense thriller movie directed by Ribhu Dasgupta and is adapted from the Korean movie Montage, the rights of which were purchased by Sujoy Ghosh. The movie features Amitabh Bachchan, Nawazuddin Siddiqui and Vidya Balan(Special Appearance, as the titles, say it to be) in primary roles along with Padmavati Rao and Sabyasachi Chakrabarty.

John(Amitabh) is an old man who lost his granddaughter to a failed rescue from a kidnapper. It has been 8 years and he is still looking for justice and constantly enquiring the officials for any clue that they might have received. Martin(Nawaz) was the cop who was handling the same case and after that incident, he left the Police job and became a father at a church to seek redemption. In the present day, A child has been kidnapped again and in the same fashion as 8 years ago. Sarita(Vidya) is the inspector in charge but lacks enough experience in Kidnapping cases, hence goes to Martin for help on the case. Meanwhile, Joy gets a clue about the Kidnapper of his granddaughter and sets to find him himself.

Watch The Trailer of TE3N here.

What should have been the strongest part of the movie is reduced to just an element which is a part of the movie, if not bad, not extraordinary. The story is decent and instantly connects with the audience. The emotional aspect of a grandfather constantly trying to seek justice for her granddaughter is moving. The screenplay is also quite decent with most of it helping the narrative run smooth. However, the final half hour of the movie is stretched to the core. The climactic suspense revelation occurs midway in the second half and the movie just wanders after that by repeating the whole narrative of the events at least thrice to different characters. The dialogues also are too generic for an emotional conflict movie. And most of them feel repetitive. The characters of the movie are underdeveloped to some extent and some more time into the writing could have improved their outcomes.

Amitabh Bachchan shows once again why he is the Shahenshah among the actors. He adapts to the role of the helpless yet determined grandfather with ease and is the best part of the complete movie. Vidya Balan‘s character looks confused as she goes into a stubborn self-satisfied cop in the second half from the confused cop who asked Martin for help. Nawaz‘s character also has a particular shade to it but he somehow couldn’t capitalise the moments where he had to show denial. Amitabh appears to overtake Nawaz in all the scenes when they are together. The supporting cast also plays their part with sincerity. Overall a slight edge towards positive in the acting department.

‘Kyun Re‘ has become one of my favorites with touching lyrics and even more touching vocals by Amitabh. Other songs also amplify the narrative and never tend to overtake it. The songs are used as a background score which is good for the nature of the movie. Overall a positive.

The direction in this movie is quite average. The brilliance of the script is overlooked due to the lazy and slow final half hour. The movie often swings between predictable and uninteresting. In short, some of the aspects of the filmmaking has been dealt with care by the director and some have been undermined or overlooked.

Watch TE3N for the amazing performance by Amitabh Bachchan. The suspense is not engaging enough that you come on the edge of your seat. For that, you must instead watch Phobia. A decent one time watch a movie it is.